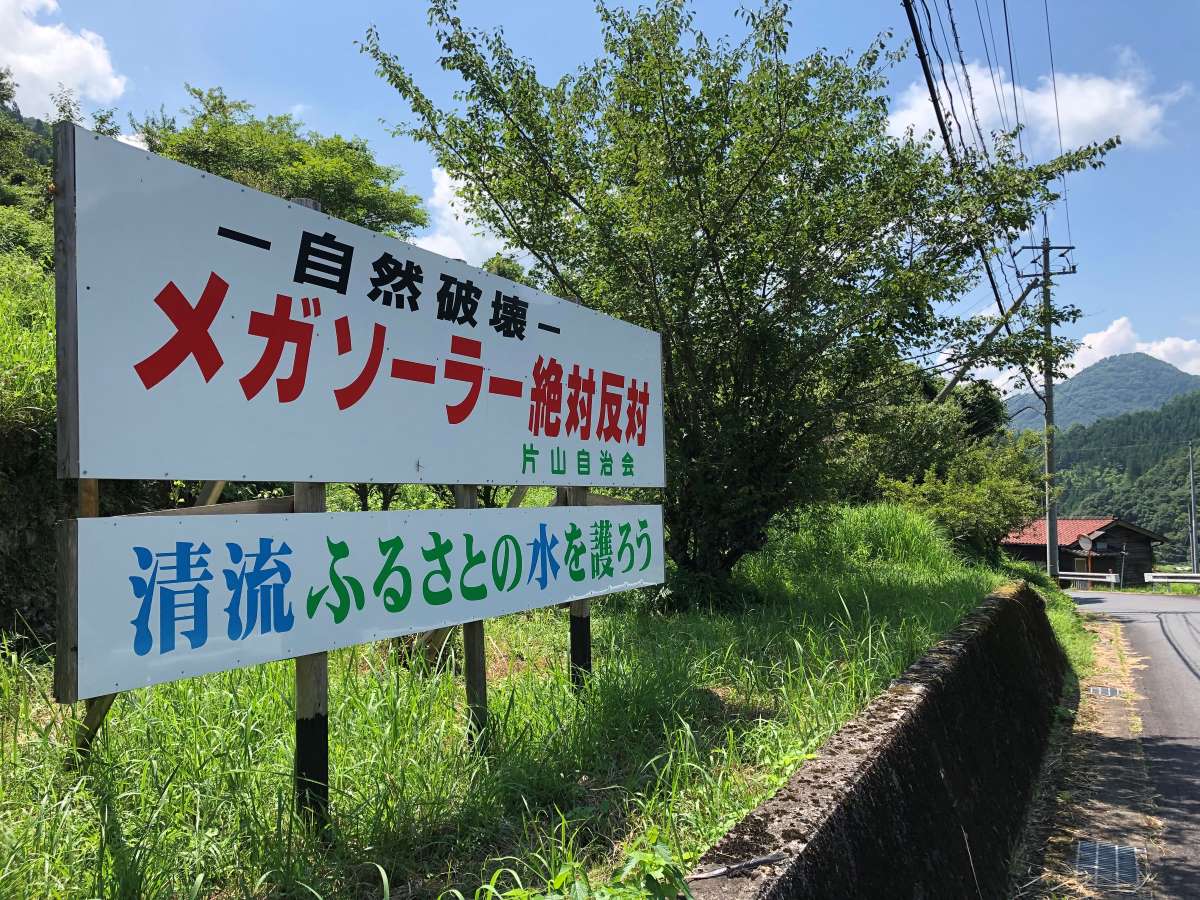 A sign against the mega solar power plant by Shanghai Electric Power installed in the Katayama district adjacent to the Tateiwa district, near Iwakuni, on August 13, 2022. (© Sankei by Rui Sasaki)

Shanghai Electric Power, headquartered in China, has acquired a mega-solar project in Iwakuni, Yamaguchi Prefecture. Its rush to complete the project by 2024 has stirred unrest in the peaceful mountain village.

Not only was the project originally supposed to be run by a Japanese company, but it has also received opposition from the local community, consisting of 20 people from 13 families, out of concern about the project’s environmental damage.

Not long after the project was announced, that Japanese company was acquired by a Japanese subsidiary of Shanghai Electric Power, which became the operator of the project.

But even before that, the project had made the locals uneasy as it had changed hands repeatedly in obscurity, making it impossible for them to fully grasp the status of the project.

Furthermore, there are concerns about its impact on United States Marine Corps Air Station Iwakuni, located on the coast. The power generation facility sits directly under the route between the air station and its training airspace.

Takashi Ishimoto, a city council member who has been pursuing this issue, says, “The region’s environmental issues have become security issues.”

In mid-August, I visited the construction site of the mega solar project. Construction vehicles rushed in and out of the facility unceasingly. Meanwhile heavy machinery waited its turn in the parking lot at the entrance.

According to the plan, about 300,000 solar panels are being installed across 117 hectares (289 acres) of land, an area equivalent to 25 Tokyo Domes. The power output of these panels will be 75 megawatts, equivalent to the energy consumption of about 22,500 households.

The power will be sold to The Chugoku Electric Power Company and is expected to generate ¥3.6 billion JPY ($25.7 million USD) per year.

According to Japan’s forestry law, large-scale development requires a permit from the prefectural governor. The Japanese company’s application for a permit was approved in August 2019 and construction began in November.

That was before the project was eventually taken over by Shanghai Electric Power.


Shutting Out the Locals

Yamaguchi Prefecture’s division for forest development says, “We make sure to conduct an examination every time a project changes hands. We have found no problem with the plan and have no intention of reviewing our decision just because it is a foreign company.”

Teruo Hirokane, the 72-year-old chairman of the local neighborhood association, says, “The company’s lack of transparency is disconcerting. It’s absurd that none of us who live in the neighborhood are allowed to see the construction site.”

Shanghai Electric Power Japan has refused to be interviewed about the project.

The Japanese government is attempting to promote the use of renewable energy sources such as solar power generation to achieve decarbonization by 2050. But such efforts have taken an unpleasant turn as more Japanese companies are acquired by foreign companies through these mega-solar projects.