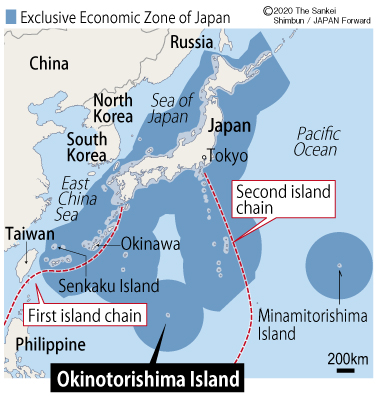 On July 18, the Japan Coast Guard (JCG) confirmed that a Chinese naval survey vessel which had been operating without permission within Japan’s exclusive economic zone (EEZ) near Okinotorishima continuously for ten days had been dragging what appeared to be a wire used for ocean survey purposes for three straight days.

The Tokyo government has protested to China about the intrusion, but is clearly worried that Beijing will continue its provocative activities in the area, as it has in the waters around the Senkaku Islands.

Okinotorishima is an atoll-type islet located 1,740 kilometers south of Tokyo. It is administered by Ogasawara Village, which is officially part of Tokyo. It is Japan’s southernmost territory.

Japan has built permanent structures on the rocks in the area and claims a large exclusive economic zone around Okinotorishima. Although China does not itself claim the area as its territory, it denies that Okinotorishima qualifies as an island under the United Nations Convention on the Law of the Sea (UNCLOS). 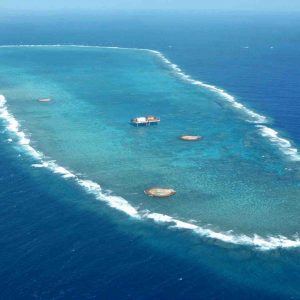 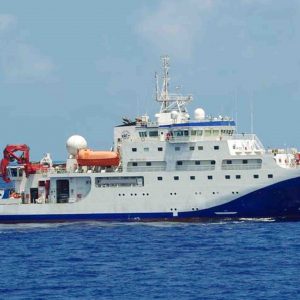 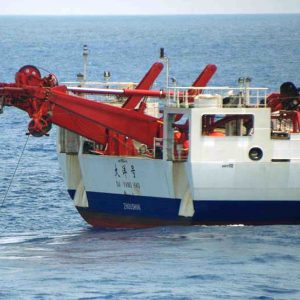 China’s Maritime Survey Must Stop at Once

On July 17 Chief Cabinet Secretary Yoshihide Suga told a press conference that if the Chinese vessel in question was indeed conducting a scientific survey, it should desist at once.

He added that all of Japan’s concerned ministries and agencies were on alert and coordinating a strong response to the problem. It was also learned that the Japanese government has protested to Beijing through diplomatic channels.

A JCG patrol boat first spotted the Chinese ship on July 9. With the exception of July 15, the Dayang Yihao conducted survey activities in Japanese EEZ waters every day from July 9, until 5:00 pm on July 18, when it finally left the EEZ.

Despite repeated demands from the JCG by radio and electronic messaging board, the Chinese ship showed no inclination to depart. It’s stay in Japan’s EEZ this time was the longest on record, surpassing the six straight days a Chinese vessel had remained in the area back in 2011.

Incursions by Chinese naval vessels around the Senkaku Islands, which are administered by Ishigaki City in Okinawa Prefecture, have also been increasing, not only in frequency but also the duration that they linger in the area. Observers believe that the Chinese government is coordinating its maritime incursions around the Senkakus and Okinotorishima to beef up its advance into the Blue Pacific.

UNCLOS does not recognize unauthorized maritime surveys in the EEZ of another country. However, China claims that Okinotorishima is a shoal rather than an island, and therefore, it argues, Chinese research vessels “do not require permission from Japan” to conduct scientific research in the area around Okinotorishima. That argument forms the excuse for its increased activities in the area.

As Chinese Foreign Ministry spokeswoman Hua Chunying put it, “Okinotorishima is only rocks and does not constitute an island with associated EEZ and maritime shelf.”

China obviously is seeking to make its interpretation a fait accompli. If Beijing recognized a Japanese EEZ based on Okinotorishima that would deal a major blow to its interests regarding seabed resources as well as its overall maritime strategy.

In order to realize its dream of becoming a major naval power, China has adopted an “anti-access, area denial” strategy, calling for the complete expulsion of U.S. military forces from within the “First Island Chain”.

The area claimed by China stretches from Kyushu through Japan’s Ryukyu Chain, Taiwan, and on to the Philippines, thereby turning the East China Sea and South China Sea into a vast Chinese pond.

It also envisages keeping U.S. forces from coming near the part of the Pacific Ocean west of the “Second Island Chain” stretching from the Ogasawara Islands to Guam.

In line with this game plan, China cannot afford to ignore the military significance of Okinotorishima, situated as it is between the two island chains. That makes the collection of maritime survey data on seabed topography, tides and currents around the island all the more important to Beijing’s territorial expansionism, if it is thinking of developing a submarine force presence in the area.

China has unilaterally taken possession of  features in maritime areas like the Spratly Islands (Nansha in Chinese)and developed them as military bases. Now, its conduct in the Japanese EEZーsimilar to what it did earlier in those areasーhas Tokyo worried.

The Chinese media has referred to Okinotorishima as a “springboard between the first and second island chains.” If Okinotorishima remains Japanese, that would greatly compromise the freedom of action of the Chinese Navy (PLAN) in the surrounding seas.

At the July 17 press conference, when asked about the activities of the Chinese research vessel in the area around Okinotorishima, Suga emphasized, “Come what may, Japan will resolutely defend its land, sea and air territories.”

Tokyo’s profound concerns about China’s activity around Okinotorishima has been occasioned not only by the fact that the seabed in the area is believed to contain plentiful mineral resources. Beijing’s increased involvement in Pacific islands to the south of Okinotorishima in recent years has been a significant cause for concern, and the activity by Chinese survey ships in Japan’s EEZ has been seen as part of China’s overall maritime push into the South Pacific.

With China’s activities in the Pacific very much in mind, Japan’s Defense Agency is pushing ahead with plans to convert Izumo-class multipurpose destroyers belonging to the Maritime Self-Defense Force into true aircraft carriers that can carry fighter aircraft.

“There are almost no airports in the South Pacific that the SDF can use,” a Japanese defense official explains. “The drive to transform the Izumo into true aircraft carriers is aimed at resisting China.”

Official Protests are Not Enough

China has completely ignored Japan’s repeated protests about Beijing’s activities around Okinotorishima. As a result, dissatisfaction has been growing in the ranks of the ruling Liberal-Democratic Party (LDP). Increasingly, some members have argued that protests are not sufficient and the government needs concrete policies to deal with the situation.

At a meeting of the LDP General Affairs Committee on July 17, former environment minister Yoshiaki Harada argued: “The Chinese side is accumulating arguments for “ fait accomplis” one after another in its maritime advance. The party needs to work out policies to deal with the situation.”

(Related articles in Japanese can be found here and here.)