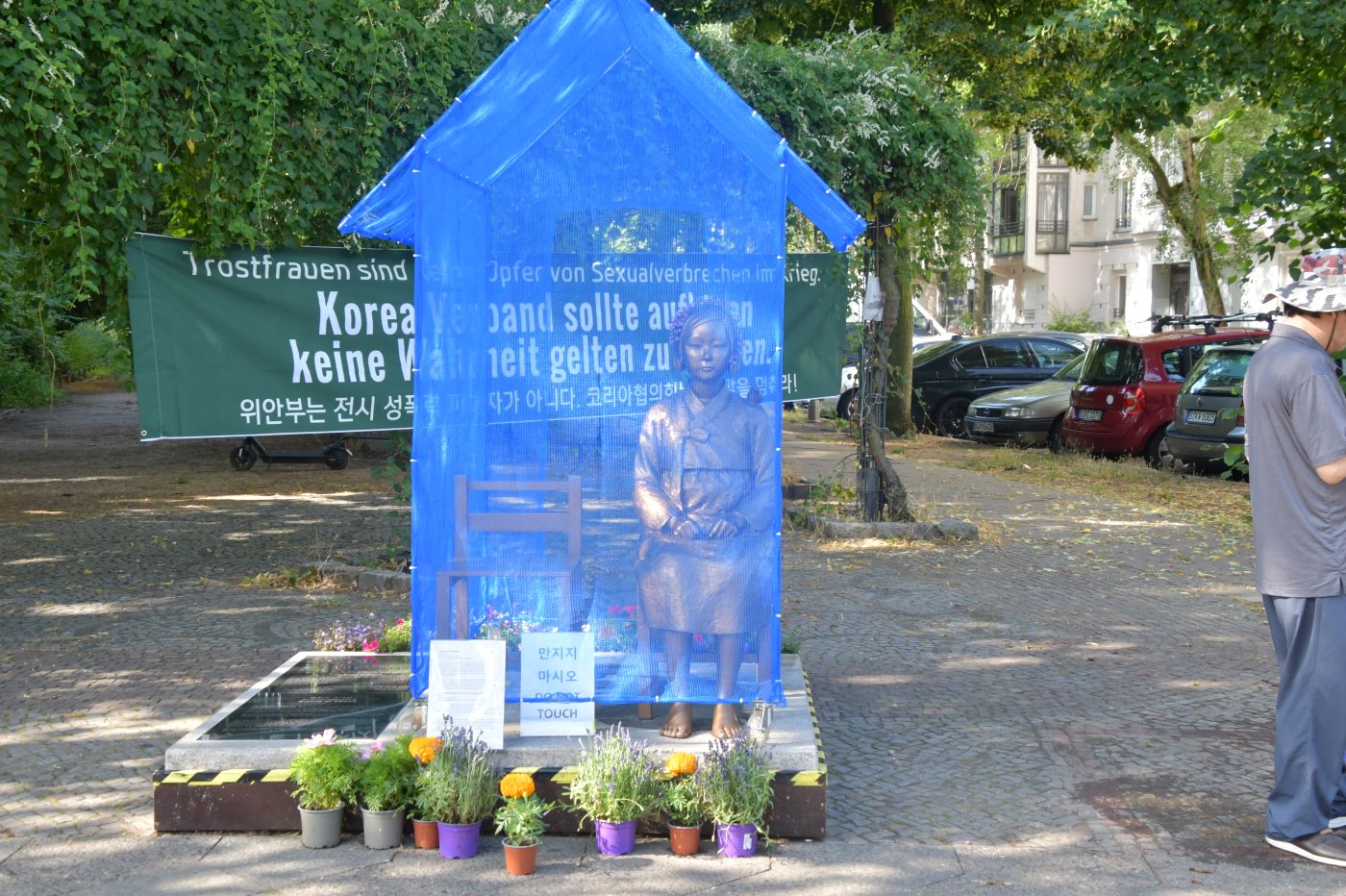 The Statue of Peace erected in Mitte District’s Union Plaza. The controversy is over the inscription engraved next to the statue, which contains unsubstantiated historical accounts. (Photo: Kenji Yoshida)

Korea Verband, a Berlin-based civic group, erected and unveiled Germany's first Statue of Peace in its capital city in September 2020. The sculpture is represented as a memorial to comfort women under Japanese Imperial rule, and it remains one of the most controversial public monuments today.

The Government of Japan immediately expressed its concerns. In addition, Japanese citizens and civil groups quickly dispatched numerous opposition letters and petitions to the Mitte District, which had granted temporary permission for the statue.

In response to this resistance, the Mitte District Council reversed its original decision allowing a one-year provisional display, and asked for the monument's removal.

This order quickly incited enormous backlash and protests within the Korean community in Germany and South Korea. Confronted with this pressure, 24 of 29 council members voted in favor of a resolution to preserve the statue until September 28, 2021. However, when that date approached, the municipality extended the deadline for another year via special permission.

Where The Statue Controversy Stands Now

The extension by special permission also recently expired on September 28 2022. Yet, the statue is still there, and neither the Mitte District Council nor the Department of Art, Culture, and History, which is responsible for advising and approving the city’s public space initiatives, has made any announcement addressing the matter.

The district assembly has requested the district office to extend the approval of the so-called peace statue until a memorial has been erected that covers the whole range of the topic 'Sexualized Violence against Women in Warlike Conflicts’... Coordination is currently still underway with the Senate Chancellery, whose agreement is required for an extension of the permit.

From the message, it appeared that the current Statue of Peace in the Mitte District soon may be accompanied by a revised inscription that is more generic in nature, commemorating wartime victims of sexual violence regardless of time, place, and nationality.

Likewise, depending on the Berlin Senate Chancellery's decision, it could stay for a few more years or longer. Details such as the length of extension under consideration and whether the disputed epitaphs would be removed are still unknown.

In a phone call with JAPAN Forward, a representative of Korea Verband said, "We submitted a request to extend the monument's exhibit in May 2022, but didn't hear back from the District Council. We believe the district plans to develop a new inscription panel and extend the installation period, but we're unaware of the details as they provided no official documentation."

The 29-member District Council appears to be waiting to hear from Berlin's Senate Chancellery, the executive body overseeing the city of Berlin, before making the final call.

Until then, this highly contentious sculpture appears set to remain in its present location.