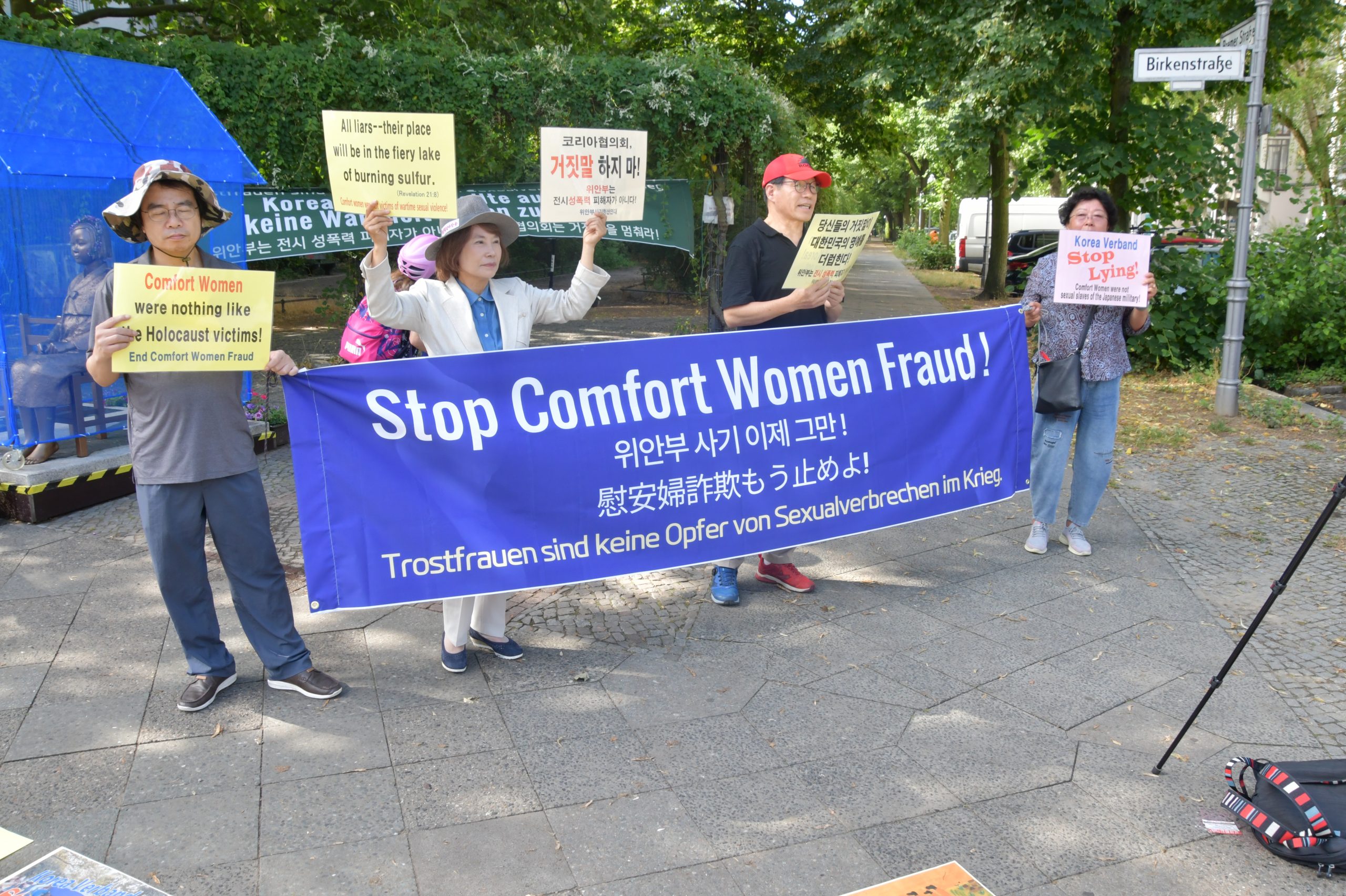 With the comfort woman statue in the background covered by a blue sheet by the Korean organization, a protest calling for an end to the comfort women fraud was held in Berlin in June 2022.

No monument has ignited more controversy or created a bigger chasm in the last decade than the so-called “Peace Statue,” initially erected in 2011 in front of the Japanese embassy in Seoul, South Korea. That first one commemorated the 1000th anniversary of the Korea Council’s Wednesday rallies.

The five-foot bronze statue, designed by sculptors Kim Seo-kyung and Kim Eun-sung, embodies young Chosun women who were allegedly dragooned and sexually enslaved by the Japanese military under its colonial rule ー euphemistically referred to as “comfort women.”

The issue of comfort women is highly contested and politicized. No scholarly consensus has been reached on the precise definition or the approximate number of women involved. Some historians (for example, Ikuhiko Hata) estimate that there were 5,000 to 10,000, while Korean media and textbooks claim 200,000.

Likewise, a rapprochement between Tokyo and Seoul over this historical problem has advanced little since the former Moon administration declined to carry out the 2015 Agreement between the two countries.

Tackling the Proliferation of Statues

Academic discourse on comfort women and diplomatic relations has, consequently, stagnated for the past 30 years. In lieu of academic or diplomatic progress, more than 140 identical statues have been installed across South Korea since 2011, with 34 more exported to foreign countries, including the United States, Canada, Australia, and, recently, Germany.

This newest establishment in Germany, unveiled in 2020, is currently at the epicenter of international controversy, as a new organization from South Korea advocates for its removal from the heart of Bremer Street in Mitte, Berlin.

Formed in January 2022, End Comfort Women Fraud (ECWF) is a new civic group led by political activist Joo Oksoon and several intellectuals and researchers based in South Korea. In June, four members traveled to Germany for a five-day campaign to protest against Korea Verband, a local Korean organization responsible for installing the so-called Peace Statue.

The group also submitted a letter to the Mitte Council and the Department of Art, Culture, and History, both responsible for temporarily granting authorization to display the monument.

The ECWF letter argued that the statue’s representation and its textual inscription run counter to the historical evidence and mislead viewers. The inscription being challenged includes the words: “During World War II, the Japanese military abducted countless girls and women from across the Asia-Pacific region and forced them into sexual slavery.”

This is what Lee Woo Youn — an ECWF senior member, researcher at Naksungdae Institute of Economic Research, and co-author of the bestselling book, Anti-Japan Tribalism — has to say: “Comfort women were on average 25 years old, many of whom signed an employment contract with the station owners or brokers and returned home when their contractual obligations ended.”

Lee and other campaigners contend that the statue’s description panel is thoroughly deceptive and generates unwarranted contempt against contemporary Japan and the Japanese people.

ECWF members also dispute Korea Verband’s assertion that comfort women are comparable to victims of the Holocaust under the Nazi regime.

By definition, the Holocaust was a genocidal massacre of the Jewish population. No historical record points to such a heinous crime committed by the Japanese military or the imperial government against these women.

Around 1942, Germany operated roughly 400 comfort stations, forcibly drafting women largely from Eastern Europe. In contrast, Japan in 1943 had around 300 stations composed of women who signed voluntary contracts, mostly from the Japanese mainland or the Korean Peninsula, then considered part of the Japanese Empire. If anything, Germans should be atoning for their atrocities, not disseminating erroneous information about another nation.

The End Comfort Women Fraud group has faced fierce opposition from activists in Berlin and nationalist backlash in South Korea. A swarm of often biased and misleading reports by the South Korean media have stirred public opinion against them.

Korea Verband arranged their own demonstration in Berlin, directly across from the statue, and on several occasions, authorities were called to subdue heated confrontations. Rally-goers from the German-based group chanted derogatory remarks to ECWF members and physically assaulted one.

Korea Verband twice declined an invitation for a debate. And no one from the Mitte District agreed to meet the four South Korean scholars who flew all the way from Seoul.

Stefanie Remlinger, the councilwoman who initially consented to receive the letter from the visitors from Seoul, suddenly refused the night before, citing ambiguous reasons. Earlier in July, to the disappointment of the advocates, the same politician met with the leaders of the Korea Council and Korea Verband to accept a petition requesting the preservation of the monument.

Despite the many obstacles, Joo, Lee, and Kim Byung Heon (director of the Korean History Textbook Research Institute and senior ECWF member) feel optimistic about a gradual shift in Korean public sentiment.

Kim senses a noticeable change in how Koreans perceive the comfort women issue. Change has been especially noticeable since Yoon Mi Hyang, a former head of the Korea Council ー the largest comfort women advocacy group ー was indicted on multiple charges, including fraud and embezzlement. Lee Yong-soo, an outspoken former comfort woman and once a close confidante of Yoon, publicly reprimanded her for the misconduct and for financially exploiting this issue.

Joo thinks this shift in public opinion is also associated with the new conservative South Korean president. Yoon Suk-yeol, who assumed office on May 10, aspires to revitalize ties with Japan and the United States based on practical needs and shared liberal-democratic values.

“Under [former South Korean President] Moon Jae In, the anti-Japanese sentiment was at its height, with many Koreans expressing unrelenting malice toward anything Japanese. This ‘tribalistic sentiment’ will ultimately sabotage economic and security ties with our traditional allies beyond repair,” said Joo.

It is yet unclear to what extent the Yoon administration desires to delve into the comfort women issue, or if the new South Korean president will implement the 2015 agreement. Nevertheless, Yoon has declared his wish to restore the relationship vis-a-vis Japan and not to merge historical quarrels with pending matters.

Joo, a politician formerly with the Liberty Korea Party, has advised the presidential transition team to designate a new committee to investigate the issue of comfort women at the Cabinet level.

As for the ECWF’s future objectives, they wish to promote a more robust discussion surrounding the statues and the political agenda of their sponsors through transnational symposia. For this purpose, the group expects to visit Glendale City and  San Francisco in California to convey information and encourage debate related to the “statues of peace” and comfort women memorials in their respective locations.

They understand that the US is a challenging environment because of the nation’s sizable comfort women support groups and their systematic lobbying efforts.

However, Lee points out: “In 2018, the Philippines, under [President Rodrigo] Duterte’s watch, dismantled its ‘Filipina Comfort Women’ statue to avoid damaging bilateral relations with Japan. Similarly, in July 2021, the city council in Aurora, Colorado, voted against a proposal to build the Peace Statue on public property. The councilors opined that the local park was “not compatible” with a sculpture symbolizing an “unresolved dispute between two foreign states.”

In the above places, the governments were persuaded not to take sides on this intensely disputed, politicized issue. The people should freely debate it and come to their own judgment without the state’s intervention. Lee, Joo, and Kim hope these examples will serve as a meaningful precedent for other politicians to follow.