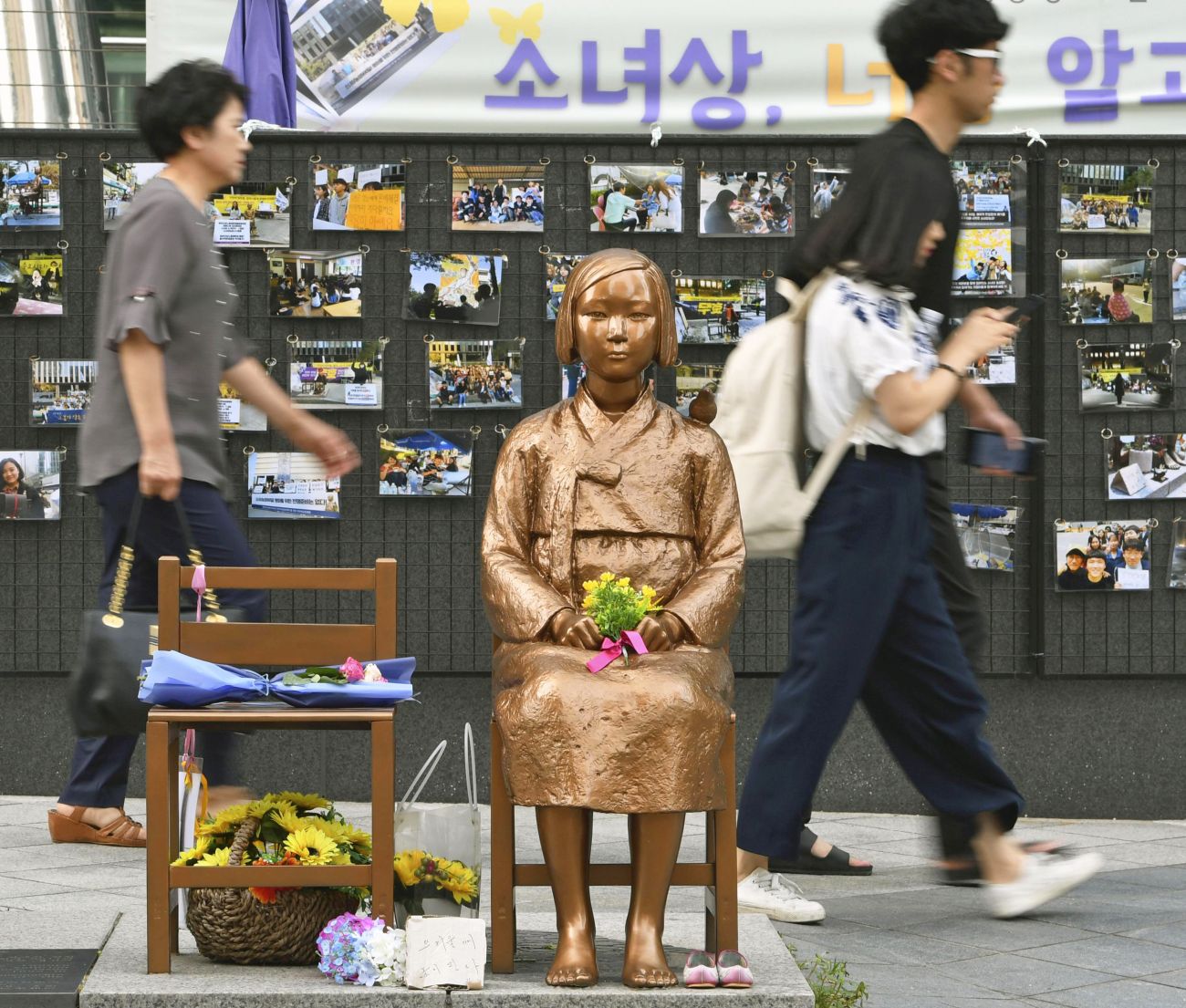 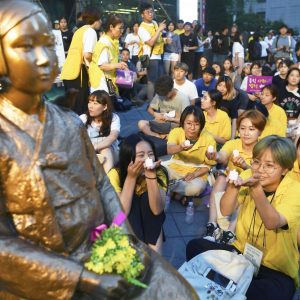 Anti-Japanese meeting in front of Embassy of Japan in Seoul. The comfort women stature is the center of the meeting. 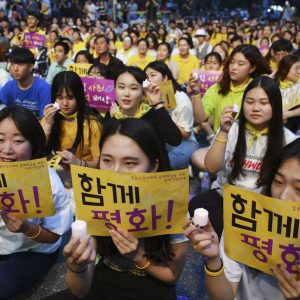 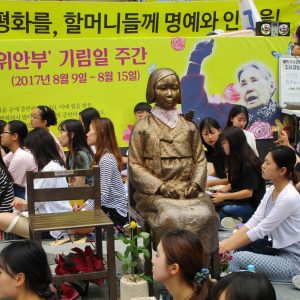 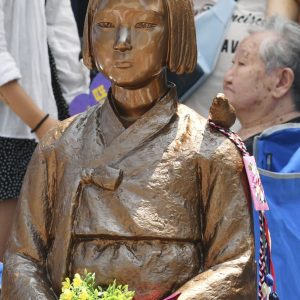 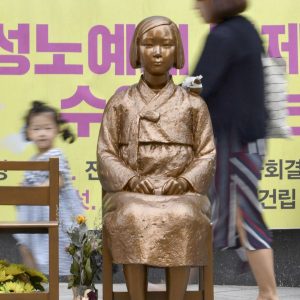 The comfort women statues that continue to proliferate in the United States, Europe, Asia, and elsewhere have an unseen consequence. Their tacit indictment of wartime populations is seen as cowardly and indicates the lack of concern with protecting vulnerable women.

As the world still waits for proof of activists’ claims that 200,000 women — many, if not most, of them Koreans — were forcibly abducted by the Japanese military and made to work as comfort women, we should remember that there is another gaping evidentiary hole.

While the silence of a population in the face of such alleged horrors may be understandable in a country under military occupation, Korea was not occupied. It was part of Japan during the annexation period.

Not Under Military Occupation

Koreans were well-integrated into Japanese society and work force during the annexation period. In addition to holding public offices and serving in the police force, hundreds of thousands of Korean men served in the Japanese military.

Many served as officers and a few as generals. Lt. Gen. Hong Sa Ik, head of PW Command of Japan’s Southern Army, is an example of a Korean in command of Japanese troops.

Prince Yi Wu, grandson of the Korean Emperor Gojong, served as a colonel in the Japanese Army. When he was killed by the atomic bombing of Hiroshima, his aide — a Japanese officer — felt he had failed to properly protect Prince Yi and committed suicide. Is this the action of a man who saw Korea as a “brutalized slave colony”?

Charges that earlier generations did nothing as hundreds of thousands of women were abducted are an indictment of the entire wartime generation of Koreans. A whole generation must have been exceptionally — and uncharacteristically — passive to allow such an injury to their wives, daughters, and granddaughters. (RELATED ARTICLE: Korea: Daddy Don’t Leave Me!)

The allegations also fly in the face of the deep respect Koreans are known to have for their elders. Even former comfort women attesting to abductions make no mention of their parents (or anyone else) resisting or trying to prevent their alleged kidnappings.

One former comfort woman said she was reported as simply missing.

The accusations of mass abductions in effect portray one’s grandparents’ generation as cowards and opportunists who sold out their daughters and granddaughters to the Japanese.

This is shameful, and it is a gut-wrenching insult to elderly Koreans.

Allegations are one thing, but facts are another.

World War II military documents provide overwhelming evidence on the true nature of the comfort women system. (See Wartime Military Records on Comfort Women by this author.). In addition to the oft-quoted “Japanese Prisoner of War Interrogation Report No. 49,” there are additional documents, including the following:

There are additional documents from Dutch, Australian, and Japanese sources, and even the diary of a Korean operator of a comfort station.

The many contemporaneous records of the allied forces at the end of the war clearly identify comfort women as contract prostitutes, not dragooned sex slaves.

Following the same pattern, in the Philippines, Japanese military records clearly stipulated that local brothels for use by Japanese soldiers would employ only licensed prostitutes.

While prostitution was legal at the time, recruiting involuntary women as prostitutes was a war crime – including under Japanese law.

There is only one case of involuntary recruitment found in the U.S. war crime records [HQ, Island Command, Guam, Serial No. 846, May 12, 1945]. It involved a Japanese civilian on Guam pressuring two women into prostitution.

The U.S. war crime records are consistent with the finding of authorities in other locales as well. In Indonesia, fewer than half a dozen cases were tried by Dutch authorities. The Bart von Poelgeest Report issued by the Dutch authorities clearly points out that forced prostitution was prohibited by Japanese military regulations.

Other than the incidents mentioned, there are no records of forced prostitution.

Part 2: Korea Had Long History of Trafficking in Women—Even Before the Japanese Came

The interrogation of three Korean civilians employed by the Japanese Navy describes what would have happened if the Japanese had abducted or conscripted Korean women as sex slaves. “MIS, Composite Report, List 78, 28 Mar 45” (page 3, item 18) states:

All Korean prostitutes that PoW have seen in the Pacific were volunteers or had been sold by their parents into prostitution. This is proper in the way of Korean thinking but direct conscription by the Japanese would be an outrage that old and young would not tolerate. They would rise up in anger killing Japanese no matter what consequences they might suffer.

This more accurately describes how Koreans would react, especially the family members of the women being abducted.

Even involuntary conscription by means other than direct abduction would have resulted in riots.

The Japanese military was deployed on many different fronts and in many different campaigns. It had neither the leisure nor the capacity to round up and guard 200,000 women who were allegedly sex slaves from among hostile populations speaking foreign languages.

In some cases, critics have carelessly lumped the official recruitment of women for the factory labor force together with the private comfort women industry.

The Women’s Volunteer Labor Force, known as the Teishintai or Chongsindae in Korean, was used to mobilize unmarried young women for factory work in late 1944. It had nothing to do with the comfort women system.

By this stage of WWII, Japan was undergoing aerial bombardment and fighting for survival. To be blunt, sex was the last thing on anyone’s mind as cities burned and millions of people began to go hungry.

Over the course of more than seven decades of postwar history, many have lost sight of these wartime realities and complexities.

Humans in general tend to side with victims of injustice, and today World War II in the Pacific is often presented as a one-sided conflict in which everything that Japan did, from the battlefield to the bureaucracy, is somehow fraught with evil intentions.

But as is evident from the many original military documents, the sex slave narrative can be seen for what it is — a hate campaign to demonize Japan today, which has nothing to do with Japan’s WWII past.

Comfort women statues are part of that strategy to demonize and delegitimize Japan in the eyes of the international community.

But, let us remember that these statues also tacitly indict Koreans as cowards who did nothing as a generation of young women was stolen from their midst.