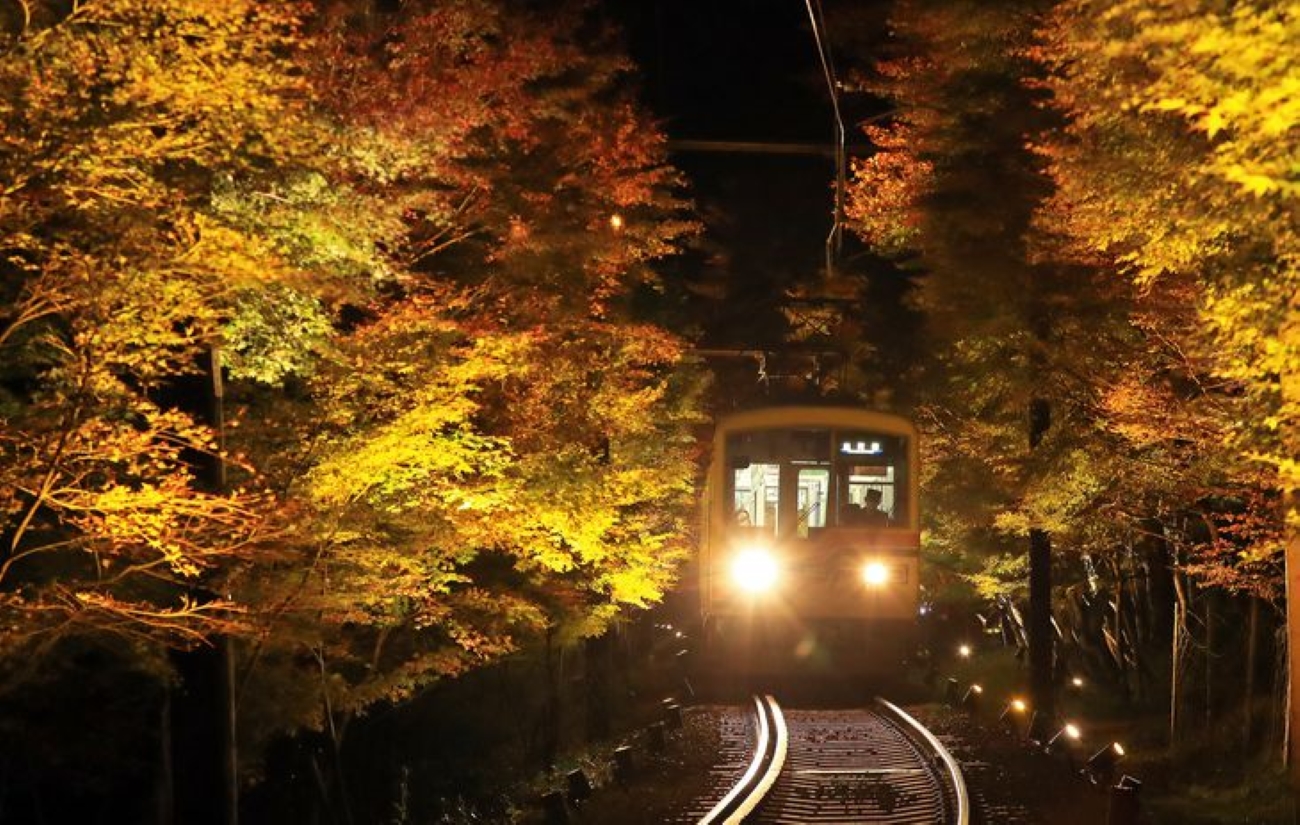 On November 5, the Eizan Electric Railway Kurama Line, which runs in the northern part of Kyoto, took a test run through the Momiji Tunnel of maple trees, illuminating the autumn leaves along the railway tracks and bringing a fantastic sight into view from the train windows.

Lighting up of the autumnal tunnel officially began on November 6, 2021, and the best time to see it will be the middle of the month.

The illumination takes place for the first time in two years. Service on some sections of the rail line was suspended after a disastrous landslide in July 2020, resuming only in mid-September 2021.

The Momiji Tunnel runs for 250 meters between Ichihara and Ninose Stations, with about 100 lights installed along the line. When the 280 trees are lit up, the train turns off its inside lights and runs at a reduced speed, so passengers can enjoy a space filled with rich red and yellow light.

Kaho Hirayama, 22, a fourth-year university student in Katori City, Chiba Prefecture, said, “The scenery filled with autumn leaves was beautiful. I want to come again to enjoy the changing colors.”

The illumination will continue to delight spectators until November 28. During this period, the autumn leaves of Kibuneguchi Station (Sakyo Ward, Kyoto City) and the area around nearby Kifune Shrine will also be lit up.

According to the Tokyo-based Japan Weather Association’s forecast released on November 4, the autumn leaves will be at their best on a relatively normal schedule throughout the country this year.

Color changes quickly when the temperatures are low, but the pace of change slows when temperatures are warmer. Therefore, it’s expected that the autumn colors may last longer than usual in some areas of Western Japan due to predicted rising temperatures in the middle of the month.

The main attractions of the season in the Kinki region (southern-central part of Japan‘s main island Honshu) include the famous Koyasan in Wakayama, Nara Park, and Kobe Municipal Arboretum, which is a botanical garden. Colors have also started to change in Kiyomizu-dera in Kyoto and Mt. Rokko in Hyogo Prefecture, where they are expected to peak in late November.

The best time to see Arashiyama in Kyoto is expected to be early December, which is a little later than usual.