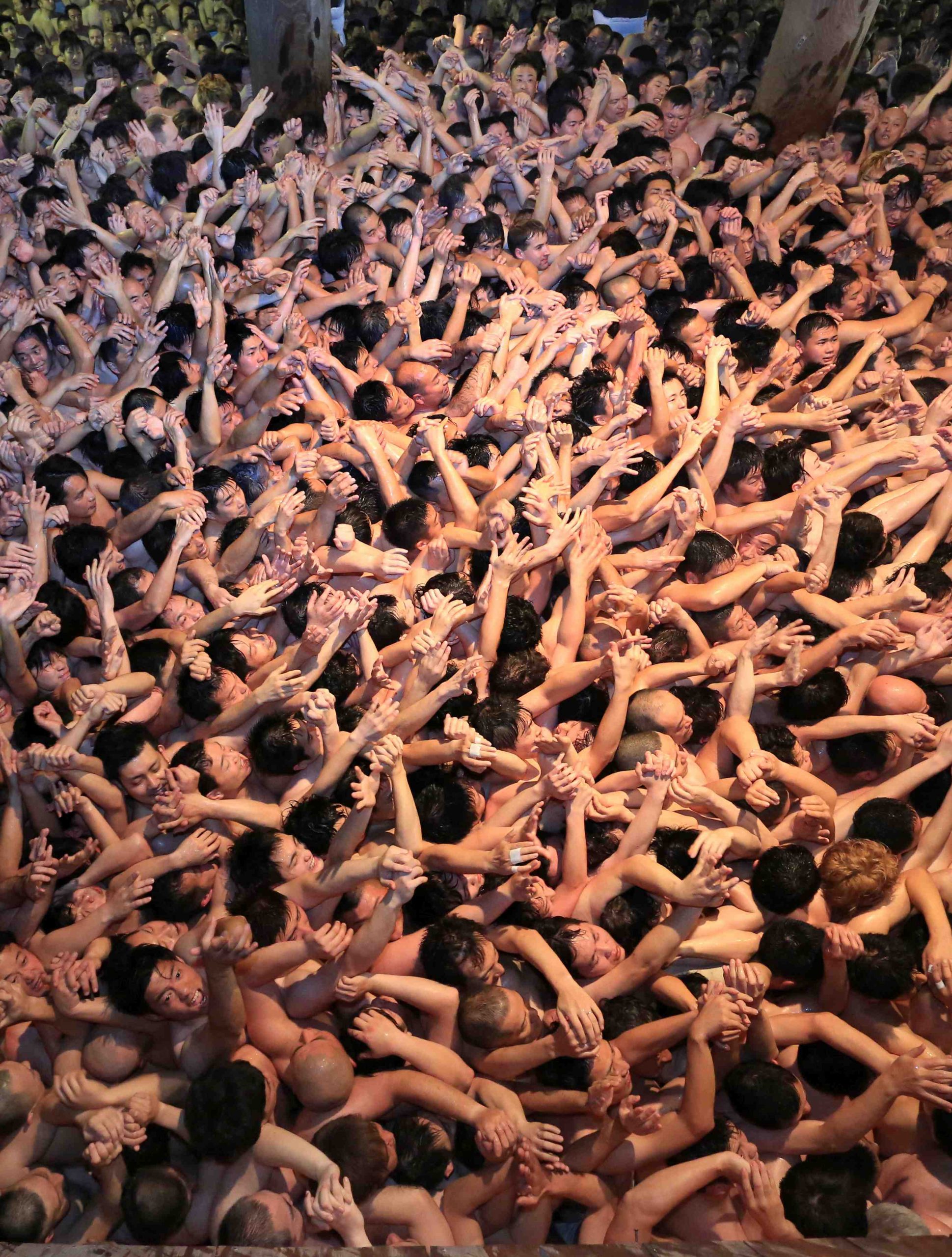 Okayama’s Saidaiji Eyo Festival, also dubbed the “Naked Festival,” will be held on February 20 this year, 2021.

Known as one of “The Three Strangest Festivals of Japan,” it involves crowds of men in mawashi loincloth who enter a contest to scramble and fight for the shingi (literally, “treasured tree”) to become the “lucky man.”

The festival had been facing uncertainty because of the coronavirus pandemic, and many were anxious about the possible loss of a tradition that had continued for over 500 years. After careful deliberation, the organizers decided to limit the number of festival-goers and replace the contest with a lucky draw.

One Man per Masu

“5,000 people go on this floor alone every year,” explained Priest Hiroya Tsuboi, 44, pointing to a room approximately fifteen meters in length and nine meters in width. The venue of the naked festival is in the main hall of Saidaiji Kannonin Temple. The highlight of the festival is its peculiar energy generated by the multitudes of men in loincloths competing for good fortune talismans in such close contact, described as “one man per masu (approximately 110 square inches).”

The history of the naked festival dates back to the Muromachi period (about the mid-1330s to mid-1570s). On the Lunar New Year, the temple would hold a Buddhist service called “shuseikai” to pray for peace and a good harvest. On the last day, talismans were handed only to the elders.

However, worshippers began to fight for these talismans to gain good fortune. So in 1510, they wrapped the talismans around a piece of wood to prevent tearing, then dropped them from the window of the main hall to the people. Eventually, the worshippers started wearing loincloths for better mobility, and the tradition of competing for the “treasured tree” began.

Now is the Time to Pray

The festival has been held for more than 500 years without fail. Conscription meant there were fewer participants during World War 2, but many women eagerly participated in a women’s festival where they underwent ablution to pray for Japan’s victory in the war.

The festival was held on February 16, 2020, and attracted 10,000 men. It was touch-and-go before the coronavirus outbreak became full-blown.

However, concerns began to mount about whether the festival should go on this year in 2021. The temple and the organizers of the festival, the Saidaiji Eyo Association, were in discussions since July 2020, and even considered an all-out cancellation.

Priest Tsuboi pointed out, “The festival is not just an event that can be talked about in terms of approving or canceling, but a Shinto ritual. Prayers shouldn’t cease when people’s anxieties are growing.”

Ultimately, they decided that “people need the prayers of the festival precisely because of the times we live in, during the pandemic.”

They still needed to change the style of the “treasured tree” contest to avoid risk, so they decided to invite 141 past winners from 1989 to 2020 and use a lucky draw to choose the winner for 2021 from among them.

This year, the “treasured tree” will first be dropped to the lucky man who won in 1989. Then the lucky men from the subsequent years will pass it around and form a relay using a predetermined gesture. During the relay, a monk will choose two cards out of the “festival cards” with the names of past lucky men placed on a sanbo offering stand to choose the lucky man for 2021. All of this will be broadcast online.

As the precincts of the temple will be off-limits during the ritual, events before and after the festival will be canceled, and no stalls will be open. The temple is considering online participation for those who cannot visit. They are even thinking of posting videos of the men in loincloths on social media in an attempt at a Guinness World Record for the greatest number of “loincloth video posts” per hour.

Priest Tsuboi describes how he feels about this new style. “Prayer is about the heart, but it becomes visible through action. I hope to show people how tradition moves into the future.”

He also wishes for the pandemic to end soon. “The new style shouldn’t become a precedent. I would like to revert to the festival’s original style eventually.”

(Read the article in Japanese here.)