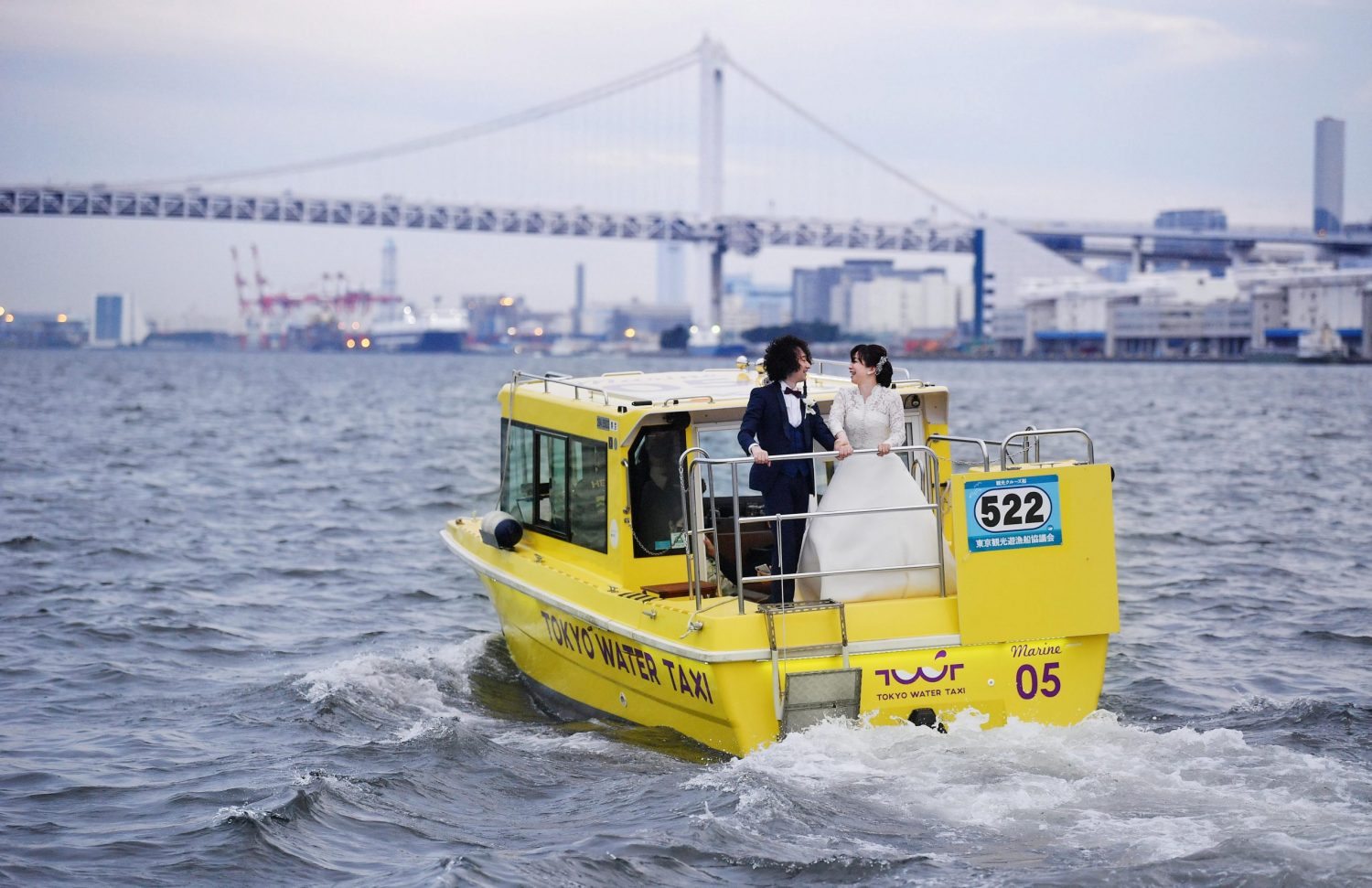 It will come as no surprise that the COVID-19 pandemic has been disruptive for weddings. According to a survey conducted by the Bridal Institutional Association, in fiscal year 2020 an estimated 280,000 weddings in Japan were postponed or canceled.

To make up for this disruption, some couples have come up with creative new ways of recording their lifetime memory by taking commemorative photos with a superb view or holding their wedding ceremony in an unusual location. All of these keep in mind avoiding the “3Cs,” closed spaces, crowded places, and close contact conversations during the pandemic, while still making it special.

It is especially encouraging to see the bright smiles of couples who are not discouraged by the “inconveniences” of what is happening around them today.

Wedding on a Tokyo Water Taxi (Photos by Mizuho Miyazaki)

In March 2021, Tokyo Water Taxi began a photo shoot service on board its boat cruising around Tokyo Bay, Sumida River, and Nihonbashi, in response to the growing number of couples who cannot hold wedding ceremonies during the pandemic.

As Tomomi Aono, a bride living in Tokyo, explained,”our parents are from Tokyo and Niigata (more than 300 km or 186 miles from Tokyo), so we haven’t been able to introduce the two families or have a wedding ceremony. We looked for what we could do by ourselves.”

The couple found a Tokyo Bay cruise that fit their dreams and offered all of the fresh air and uncrowded conditions required to keep the risk of COVID-19 infections low at the same time.

Maybe you cannot fly to a beautiful or exotic foreign destination, but you can still make the international flight a part of your wedding, if that’s your dream. All Nippon Airways, for example, has started providing wedding services on their passenger aircraft and departure lobbies to make up for international flights, which have been dramatically reduced.

On the day of one ceremony at Haneda Airport, 100 airline staff members were involved in helping one couple make their wedding special, including the captain and flight attendants. Bridegroom Toru Murakami, who was getting married on the day of The Sankei Shimbun’s visit, commented:

“It was like a dream for airplane lovers to hold such a wedding ceremony on board, something one can’t usually experience.”

In this wedding and others, the wedding guests announce their arrival at the check-in counters for international flights. The boarding information panel at Haneda Airport gives information about the ceremony.

The pamphlet distributed to the guests showed the seating chart on board. Haneda airport. (Photograph by Mizuho Miyazaki)

The bride and groom were greeted by their guests as well as the airline staff and enjoyed having their commemorative photos taken in the International Departures lobby and in front of the passenger aircraft at Haneda Airport.  (Photographs by Mizuho Miyazaki)

Other international airline companies which had to reduce flights due to the COVID-19 pandemic have also started offering wedding services.

In May 2020, plans for a Hawaii wedding ceremony were canceled for Misaki Ohno and her spouse from Ushiku City when air travel shut down, and their future seemed as if it was suspended.

“I couldn’t go on my honeymoon but I wanted to take pictures in a place which seemed like somewhere overseas,” Ohno said, adding, “It was also an opportunity to get to know the charm of a local place.”

If mountains aren’t your favorite idea, what about a museum?

One couple found the Tokyo National Museum in Ueno, a hub for national museums, to be the perfect shot of happiness for their wedding memories.

They were photographed on the grand staircase at the Tokyo National Museum in Ueno, Tokyo. Also affected by the pandemic, the museum currently rents out as a venue for wedding photos before and after opening hours.

“Recently, it is becoming so popular among people who cannot have a wedding ceremony that it’s becoming difficult to book,” said a spokesperson for the museum in Taito-ku, Tokyo.

(Find the original Sankei Shimbun story in Japanese at this link.)