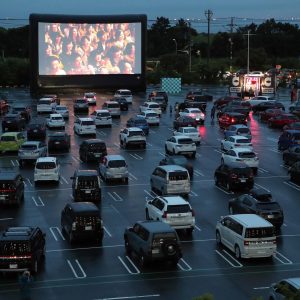 Enjoyment From Your Car

A slogan which many have been sharing in Japan on SNS and mainstream media is “Corona ni makeruna!” It roughly translates as “Don’t let yourself be beaten by the coronavirus!” In this series, we share some of the creative ways in which people are fighting these strange times, through heartwarming projects, recipes, sports, and much much more.

Sporting events, leisure activities, and even the start of new life chapters have all been affected by the novel coronavirus pandemic. The virus has stolen the daily life that we once took for granted, while forcing us to accept a new normal. This includes bothersome face masks, inconvenient online interactions, and the frustrating sense of distance from others.

However, because of this new normal, we also become aware of the comfort found in social interactions, as well as the sense of satisfaction in accomplished feats.

Here, we have gathered scenes of individuals living the new normal and finding ways to compromise.

Instead of the energetic shouts of karate students’ fighting spirit, the rustling sound of karate uniforms echoes in the dojo. The Kyokushin-kan Miyama Dojo in Hasuda City, Saitama prefecture, has 240 students. In order to prevent the spread of the novel coronavirus, students wear face shields during training. Other common precautions — such as checking students’ temperatures, frequent disinfection, and ventilation of the space — are also observed.

The dojo is roughly 1,335 square feet or 75 jo (tatami mats). In order to avoid the three Cs (closed spaces, crowded places, and close-contact settings), the number of students training at the same time has been limited to 10 students, and online training has been incorporated. Frequent breaks for rest and hydration have also been put into effect to prevent heatstroke.

Hiroshi Miyama, 57, instructor at the dojo, stays constructive, explaining, “We use face shields during training, partly as a means to make sure students are self-aware of the lifestyle mandated by this coronavirus calamity.”

The Nihon Ki-in, or the Japan Go Association in Tokyo’s Chiyoda ward, was temporarily closed in March. Operations resumed on June 3 after partitions to prevent coronavirus transmission were installed.

Extra distance between players has been achieved by decreasing the goban boards to less than half of the usual number in the general practice hall. For extra protection, participants now play matches across a plastic film.

The partitions are made of lightweight cardboard, making them portable.

Goban boards are usually wooden boards, but because the repetitive use of alcohol disinfectant would damage their surfaces, they were replaced by rubber boards.

Denji Aihara, 75, who visited from Adachi ward said: “The partitions don’t feel out of place. I can see the other player’s face, and I can sense their breathing and expressions all while conversing with them. It feels safe.”

Are the mannequins sitting in chairs there so customers can avoid directly facing each other? Cheers One’s branch in Ginza, Chuo ward, Tokyo, is known for dance performances by the staff, who are all dressed in cheerleader outfits.

Initially the izakaya made an effort to avoid the three Cs by placing stickers on the tables and chairs. Now, they have begun to place mannequins in some of the customers’ seats. The owner of the izakaya, Shin Funabara, 52,  said, “It felt lonely without the usual bustle.”

Nana Morimoto, 20, a student who visited from Nishitokyo, commented: “It looked interesting, so I decided to visit. It’s reassuring because proper coronavirus countermeasures are being taken.”

From the end of May, the concert venue decided to launch livestream, audience-less concerts on YouTube. Without the usual applause from the audience, emotional support for the venue and their performers were provided through real-time comments and online responses from viewers.

The venue manager, Takaya Kanai, 49, explained his concerns, saying: “I felt sad when we were told that concert venues could become hotbeds for coronavirus clusters. However, if by any chance an outbreak occurred here, it would cause an inconvenience to other venues.”

Elena Kato of ELENA KATO BAND, who performed at the concert venue for the first time in three months, said with a smile: “I was worried about whether the music and emotions were reaching the audience. But, as expected, live music at concert venues really is the best.”

Enjoyment from Your Car

Enjoyment From Your Car 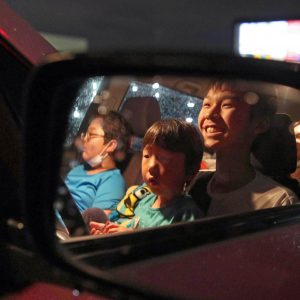 A free drive-in theater event was held at a shopping mall parking lot in Chiba City, where movies were viewed from visitors’ cars. Viewers listened to their car stereos and enjoyed the movie on a large screen in an open-air setting, all without having to worry about the three Cs.

The event was held for two days, with would-be customers significantly exceeding the capacity. Yoshikazu Kumada, 46, president of the company organizing the event, said: “The coronavirus calamity caused me to realize just how much entertainment is needed. I would like viewers to enjoy what once used to be an ordinary activity of watching movies, in a new form.”

The Tsukishima School of the Tokyo Individualized Educational Institute in Chuo ward, Tokyo is part of a major tutoring school company. Along with the white coats that instructors wear as part of their uniform, they have now started wearing face shields. The school is known for a private, individualized tutoring format that involves one instructor per every one or two students. Usually, the seating is arranged so that the instructor sits between students that are individually divided into their own sections. However, social distance is presently kept by seating the instructor diagonally across from each student.

The school has set precautions to prevent infection by wiping the desks with disinfectant before and after every session, as well as opening the windows for ventilation.