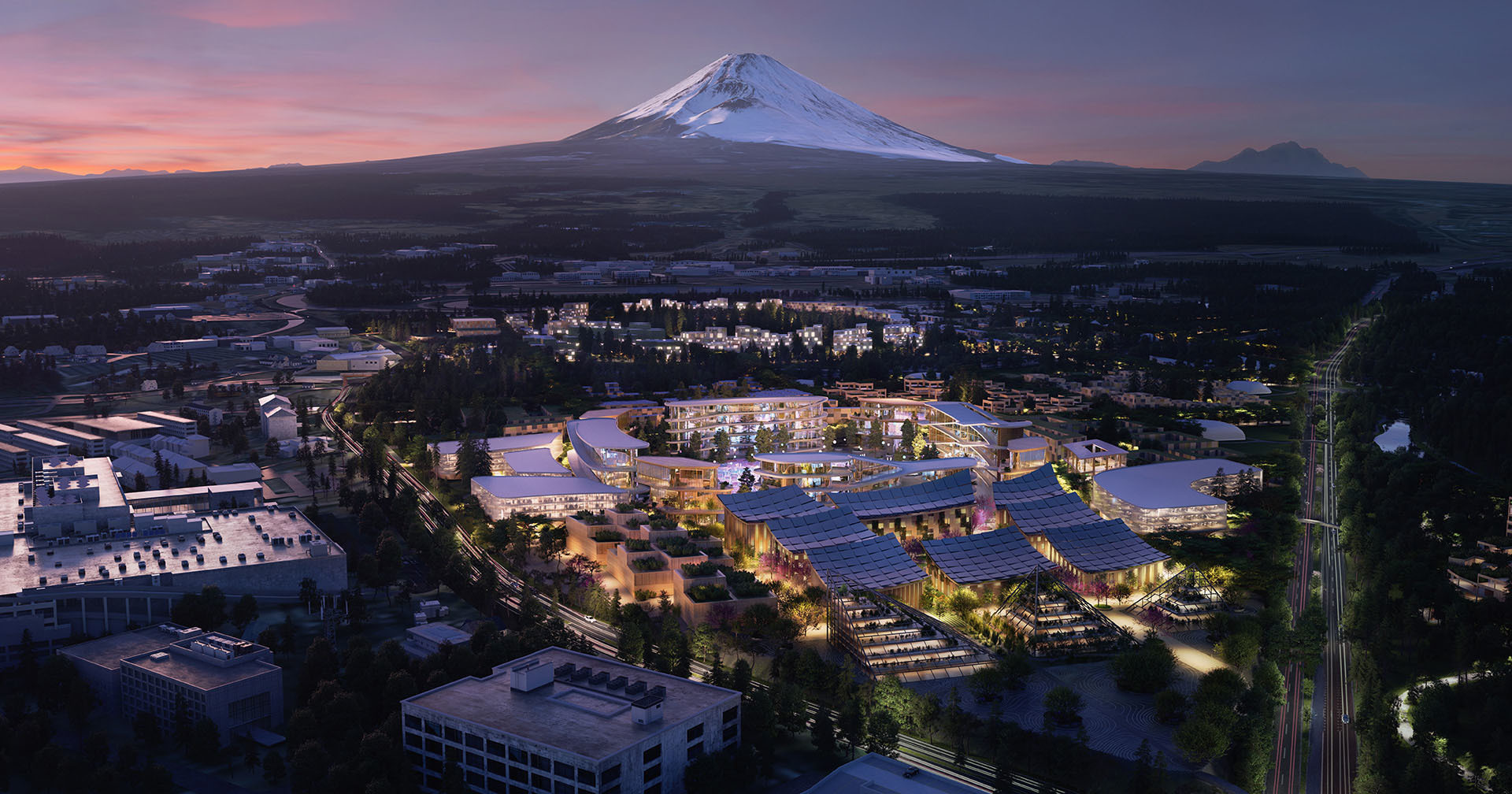 Design of Toyota's envisioned 'Woven City' at the foot of Mount Fuji.


On February 23, Mount Fuji Day, Toyota Motors began construction on a futuristic city in Susono City, Shizuoka Prefecture, at the foot of Japan’s most famous mountain.

Woven City will be a living laboratory for testing practical applications of various next-generation technologies, including fully autonomous vehicles, robots and AI (artificial intelligence) within a residential living environment. The new community is projected to eventually have more than 2,000 residents, including foreign researchers.

Support is already being lined up, with a number of companies in various fields having promised to cooperate. In addition, the local government has high hopes that through effective new city planning it can extend the boom to the surrounding neighborhood.

It seems likely that before long the name Susono will be known around the world.

“We will continue to take every step into the future together with everyone in the community.”

Toyota President Akio Toyoda made that promise during brief remarks he made at the Jichinsai Shinto ceremony for purifying the construction site, as he declared he was committed to the ideal of a “human-centered” community.

The fact that Toyota will be building the innovative community on its own property gives it comparatively more latitude to experiment with various physical aspects. as well as with “smart city” information technologies to tie the entire area together. It could not enjoy such freedom if public roads or other factors requiring regulatory changes were involved,

The Toyota president said that since it is designed to be an ever-evolving living laboratory for repeated experimentation, Woven City intentionally would always appear to be a “work in progress.” Separate roads for automated vehicles, pedestrian, joint use, and so on, will be laid out in a web pattern.

Fittingly, the term “woven” has been used in the name of the new community since the roots of the Toyota empire lie in a power loom company established nearbyーmore than a century agoーin what is present day Kosai City, Shizuoka Prefecture.

Toyoda announced in January of last year that construction of the new city would begin in the early part of 2021. It did so right on schedule, despite the complications presented by COVID-19.

The 700,000-square-meter construction site used to be part of Toyota Motor’s East Fuji Plant, which produced some 7.5 million vehicles, including the luxury Toyota Century line, in its 53 years of operation before closure in December 2020.

However, President Toyoda has vowed that the “East Fuji Plant’s DNA will carry on” in a continuing commitment to the principles of kaizen (constant improvement), diversity and working for others.

Among those in attendance at the groundbreaking ceremony were Shizuoka governor Heita Kawakatsu, who later told a press conference he was especially pleased that the kickoff to construction took place on Mount Fuji Day.

He added, “In full view of Fuji-san, they [Toyota] will be building the future and a beautiful, harmonious community.”

Already more than 3,000 companies and individuals have responded to Toyota’s call for collaborators. The local government is also getting prepared for the expected boost to local employment from new industries setting up shop in the area, as well as a growing number of visitors from around the world.

At the end of the last fiscal year, Susono City established the Susono Digital Creative City (SDCC) concept that calls for promotion of digitization in various fields, centered on cooperation with Woven City. As a result, from this fiscal year it will start rolling out specific policy initiatives for upgrading infrastructure and transportation convenience, as well as deepening local awareness of foreign languages and culture.

From this month the local city hall assigned three workers to the City Planning Division. It is eyeing policies that would extend spin-off benefits from the Woven City project to the city as a whole.

Currently, the city is drawing up plans for developing the neighborhood around JR Iwanami Station—the closest train station to Woven City. It is also working with Toyota to smooth the process for necessary administrative procedures.

A city official says, “Before a cutting-edge technology makes it out of the community (Woven City), we want it to be tested within our own city.”

At the same time, a source with the Shizuoka Prefecture government cautions, “A big new community is going to rise, but it will be difficult for the private sector alone to provide all the services needed, ranging from medical care and education to welfare.”

Various ideas have been floated in this regard, including joint research with the existing Fuji Pharma Valley Center cluster of medical and health industries in Nagaizumi-cho and the establishment of an international school in the area.

A prefectural official pointed out that the creation of a brand name community could run into law and regulation bottlenecks. “That being so, we are determined to do what we can to ensure the preparations go smoothly by cooperating with the national and city governments,” he added enthusiastically.

It has not yet been decided when the first residents of Woven City will move in, although the expected initial group of around 360 people will likely include multi-generational families with elderly members and children, along with the families of inventors/researchers.

As Akio Toyoda puts it, “At Woven City we are going to try all kinds of things in order to make people happy.”