Could a Secret Rite of Japanese Emperors have come from Eurasian Nomadic Tribes? 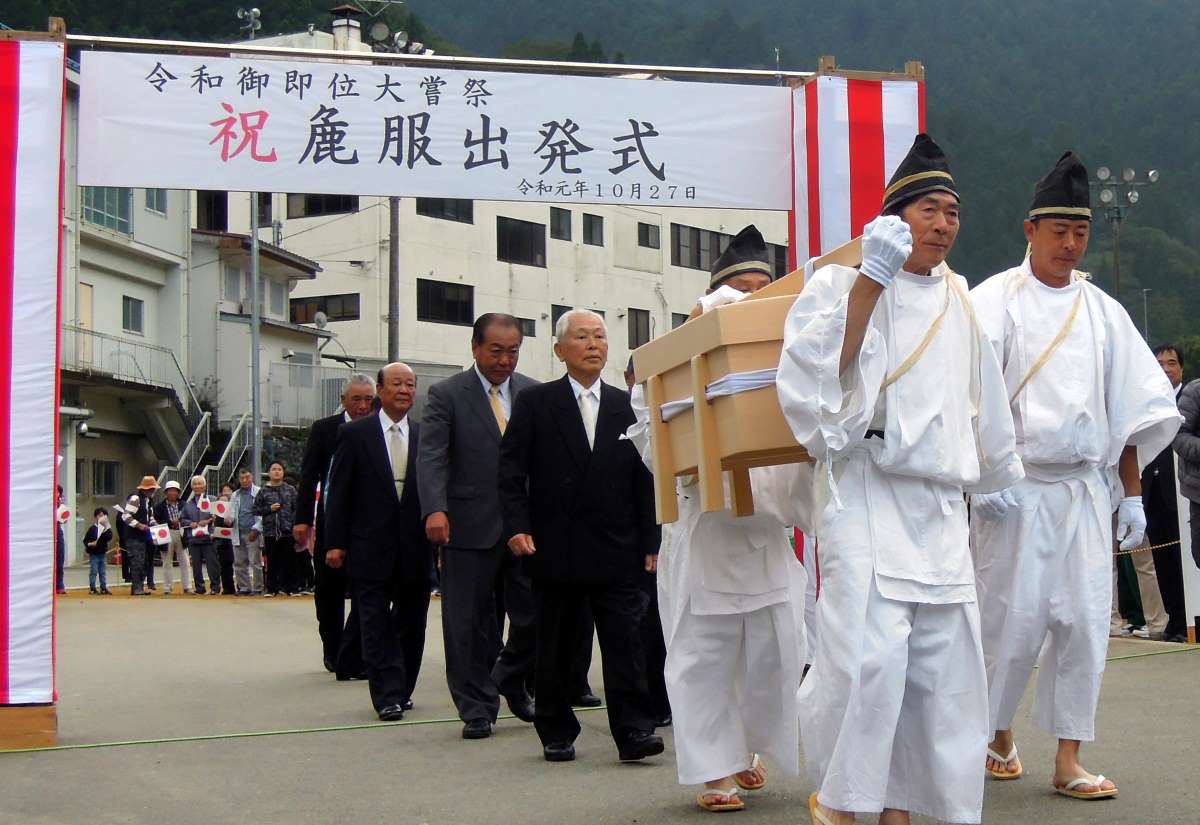 The Nihon Shoki, the second oldest record of Japanese history, contains a mythical record of a deity, or kami, that came down to earth from the heavens. The story, known as Tenson Korin, or the descent of the divine, contains an intriguing detail: the kami, as he descended from heaven, was wrapped in a futon, a traditional Japanese comforter. The futon was called “matoko ou fusuma.”

In the main ritual of the Daijosai ceremony, held when a new emperor takes the throne, a futon is placed over the shinza, or seat of the deity, in the inner chamber of the shrine. The late Shinobu Orikuchi, a scholar of Japanese literature, proposed a theory that the futon in the Daijosai ceremony was derived from matoko ou fusuma, and that the purpose of the ritual was for the new emperor to receive the divine spirit of the kami.

Why does a futon appear in the Shinto ritual to begin with?

A new theory was proposed last year to answer that question, based on research of the beliefs and traditions of the northern Eurasian nomads, reinforcing the Orikuchi theory.

This article will explore the most recent academic research on the origins of the mysterious ritual of the Daijosai.

Origin of a Secret Rite

While the Orikuchi theory was touted for its depth of insight, at the same time some criticized it as delusional due to a lack of historical evidence.

The secret ritual remains a mystery. Last year, however, Hiroshi Yamaguchi, a 90-year-old professor emeritus at the University of Toyama, who is knowledgeable on both Japanese and Eurasian classics, proposed a new theory that reinforced the Orikuchi theory. In a book titled Makimuku, Imbe, and Yamatai-koku in the Eurasian Culture (2021, published in Japanese by Shintensha), Professor Yamaguchi argues that both the mythical matoko ou fusuma and the futon used in the Daijosai have their roots in the coronation rituals of the northern Eurasian nomads, which use comforters or similar items.

Professor Yamaguchi points out that “a historical record of rituals compiled in the 9th century, beginning with the ‘Jogan Rituals,’ notes that a futon was placed over the shinza in the Daijosai ceremony.” He thus confirmed that the secret ritual described by the Orikuchi theory actually existed. He then proposed a new theory: that the ritual was introduced to Japan by the same group that began building the ancient keyhole-shaped burial mounds located across the country.

According to Professor Yamaguchi, coronation rituals of monarchs using felt comforters were widespread among ancient ethnic groups in northern Eurasia. These groups include the Xianbei in northern China and the Zhou dynasty, which descended from the Eurasian nomads. The mythical pattern of gods descending from heaven is also common in the region.

“A cultural corridor formed in the north of Eurasia, where nomads had a custom of ​​coronation rituals using comforters and the belief of the descent of deities. The myth of Tenson Korin and the Daijosai tell us that Japan is located at the eastern edge of this corridor,” said Professor Yamaguchi.

According to Mr. Kaoru Terasawa, an archaeologist and director of the Research Center for Makimukugaku, three prominent ancient burial mounds, or tumuli, in Japan – the Hokenoyama tumulus (Sakurai City, Nara Prefecture), the Hagiwara No.1 tumulus (Naruto City, Tokushima Prefecture), and the Kuroda tumulus (Nantan City, Kyoto Prefecture) – have what is called a mokkaku structure, in which the burial chambers are surrounded by wooden walls.

Mr. Terasawa believes that secret rituals were held in these spaces, in which the spirits of former chiefs were passed down to their successors. “All of these are early keyhole-shaped tumuli, and they may hold the roots of what Orikuchi described as the essence of the Daijosai,” he said.

According to Professor Yamaguchi’s research, in northern Eurasia, some burial mounds can be found with all the same features contained in the Japanese Hokenoyama tumulus and the Hagiwara No. 1 tumulus, including masonry, wooden walls, and hollowed-out wooden coffins.

These include the Pazyryk graves in the Republic of Altai in the former Soviet Union, which were built in the fourth century BC as the royal tombs of the nomadic Scythians. Another example is the Noin-Ula burial site in Mongolia, which is said to be the location of royal tombs of the Xiongnu, the nomadic horsemen who threatened the Han people. All of them were constructed before the second or third century, when burial chambers with the mokkaku structure and keyhole-shaped tumuli appeared in Japan.

Professor Yamaguchi believes that within the walls of these burial mounds, priests or shamans, who wore bird-like costumes to symbolize the heavenly realms, performed secret rituals using comforters and other similar items. He says that there is a possibility that the ancient Japanese clan, the Imbe, who are said to be the descendants of deities named after birds, such as Amenohiwashi, the kami of the eagle, had shamanistic traits and became the first builders of the keyhole-shaped tumuli in Japan.

The home of the Imbe clan is believed to be Awa region in Tokushima Prefecture, where the Hagiwara No. 1 tumulus, the oldest keyhole-shaped burial mound in Japan, is located. The  “Engishiki,” an ancient book of laws and customs, instructs that hemp fabrics called aratae are to be woven by the Imbe clan of Awa and offered for the Daijosai.

In the Daijosai held by the current emperor in 2019, aratae was prepared by the Miki family, a direct descendant of the Imbe clan in Awa, as in ancient times. “The word ‘matoko’ in matoko ou fusuma indicates the shinza, where the kami dwells, and the hemp fabric woven by the Imbe clan was the comforter that covered it,” said Mr. Yamaguchi, illuminating the mystery of the ancient mythology and the secret ritual.

The Rite May Have Been Abolished After WWII

In 1990, when the first Daijosai was held after the Second World War, the Imperial Household Agency announced that “the shinza is a place where the kami rests, but there is no bedding there. His Majesty the Emperor will not enter the chamber.” Thus the Japanese government denied the divinity of the modern Daijosai.

Professor Yamaguchi speculates that “the bedding, or the futon, may have been abolished after the war because it is not a good fit with the current Constitution, which is based on separation of government and religion and the idea that the emperor is a human being rather than a deity.”