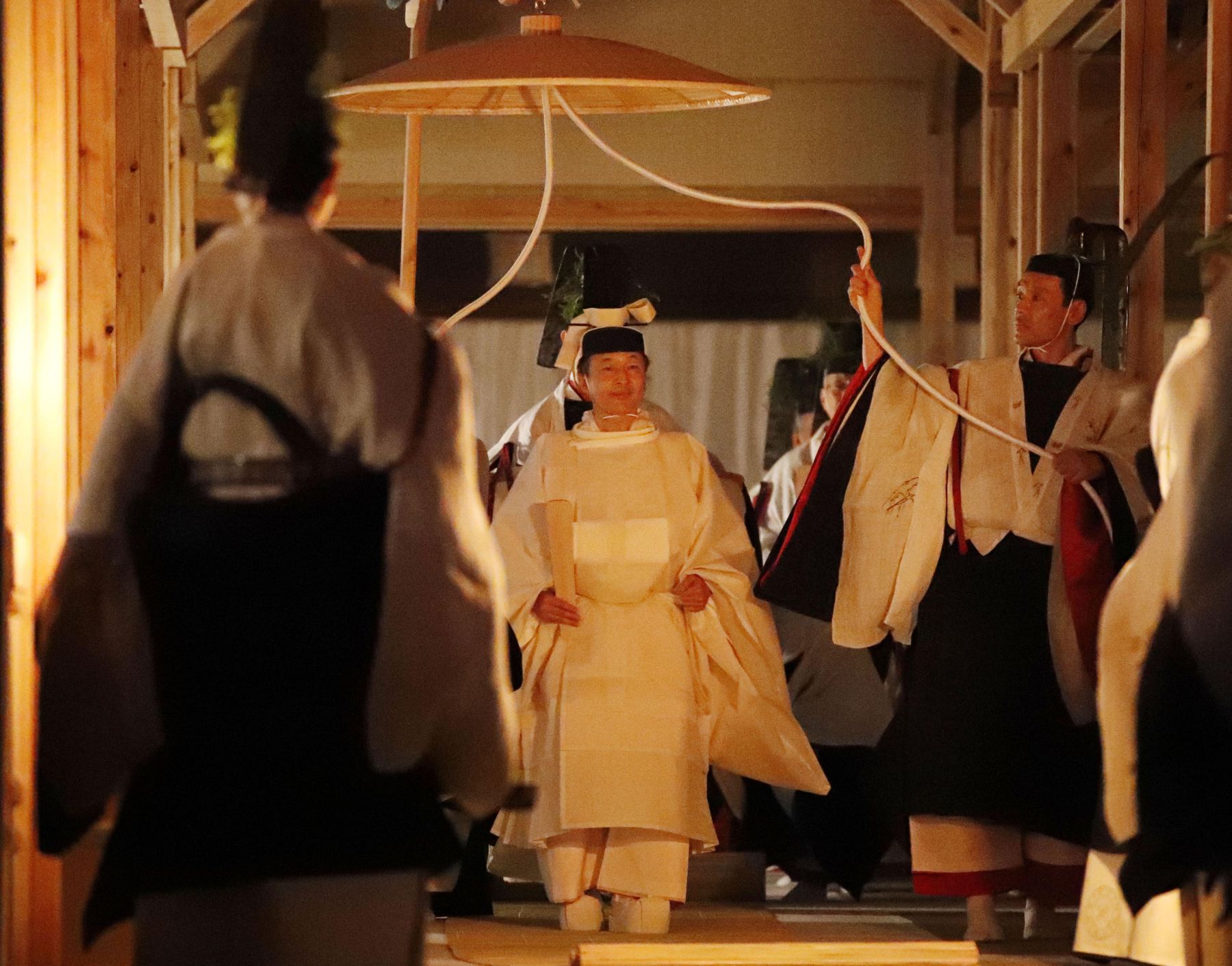 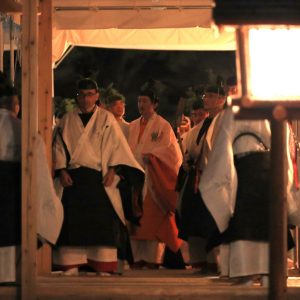 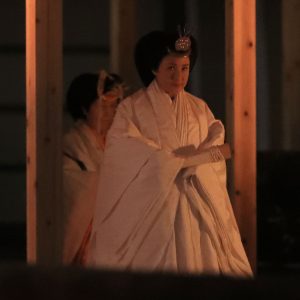 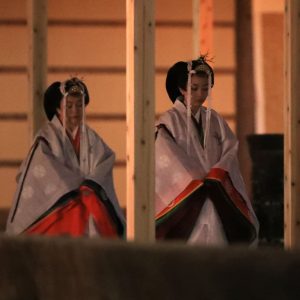 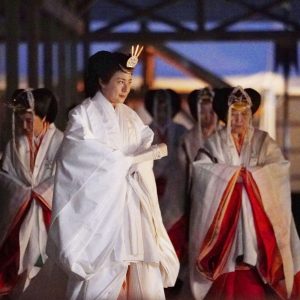 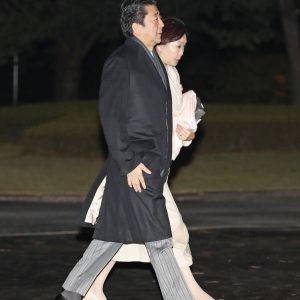 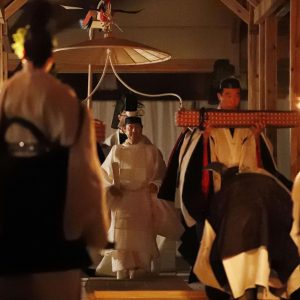 Emperor Naruhito carried out the most traditional and important of the rituals to becoming emperor of Japan, the Daijosai, starting from the evening of Thursday, November 14.

The Great Thanksgiving Festival was expected to last through to the early hours of the morning Friday, November 15.

The special ritual takes place only once during an emperor’s reign, where the new emperor thanks the divinity Amaterasu for the harvest with offerings, partakes in the meal, and prays for the wellbeing of his people.

Foreign media might have already led some to believe that this is an occult ritual, judging from the headlines.

To shed light on the tradition, we sat down with Yorio Fujimoto, professor of Shinto Studies at Kokugakuin University in Tokyo, to find out more about what actually happens during the ceremony. We wanted to know how to interpret it from an outsider’s perspective, and what is the deeper meaning of the ritual.

The Daijosai is the last of the three main rituals that an emperor performs to take the Chrysanthemum throne: Kenjito Shokei no Gi, Sokui no Gi, and the Daijosai.

First, on May 1, Naruhito received the three imperial regalia, which were passed down from his father Akihito.

Then, on October 22, in the Sokui no Gi, he officially declared his status as emperor in front of politicians and dignitaries from Japan and more than 180 countries.

Finally, there is the Daijosai. This ceremony is unique to Japan and is a special occasion that only happens once in an era.

“The enthronement in some ways is a ceremony that fits the global standard, meaning that it typically takes place in all countries where there is a monarch. The Daijosai is a ceremony which is original to Japan, which needs to be performed because Naruhito is emperor of Japan,” Professor Fujimoto explained.

In essence, Daijosai is a thanksgiving ceremony. The emperor symbolically offers food, drink, and clothing from all over the country to Amaterasu, the founding divinity of Japan.

The ritual itself was institutionalized at the end of the 7th century. It was interrupted for 220 years due to unrest. Reinstated in 1687, it has continued uninterrupted to the present. The ceremony’s current form dates back to 1738.

In some ways, this is a key transition, as Professor Fujimoto explained: “Once the food is offered, the Emperor also takes some himself. It’s like a rite of passage to becoming emperor…. It’s a very important festival from the point of view of the Emperor and the Japanese people, much more important that the enthronement.”

The ceremony takes place inside the Imperial Palace, in the Daijokyu, a structure built a week before the ceremony. On the evening of November 14, Naruhito went through a purification ritual in a section of the structure called the Kairyuden, and then entered a room behind a closed curtain around 6.30 P.M. There, on the Fukusuma, Amaterasu is said to rest after the ceremony takes place.

Wearing a white kimono called Gosaifuku, used only during a few imperial thanksgiving ceremonies, the Emperor kneels next to the Fukusuma, but faces away from it toward Ise Jingu, the place where Amaterasu is enshrined, and offers oblations to the divinity.

In a ritual estimated to take up to two hours, chopsticks are used by the Emperor to offer food from all over Japan to the divinity, including new rice, millet, seafood such as seabram, squid, abalone, fruit, and specially-brewed sake. Included is a derivative millet called Awa, often used when rice harvests were poor due to natural disasters and symbolic this time in light of the recent typhoons and heavy rains suffered by Japan. The food offerings are accompanied by prayers for the safety and welfare of the people of Japan. After that, Naruhito partakes in the meal himself.

Interestingly, objects which symbolize clothing are also offered, such as kimono fabrics — one in silk and one in linen — together with a pair of shoes.

Approximately five types of food from all 47 prefectures are brought to the Imperial Palace as offerings and placed in an outer area of the Daijokyu. These symbolize the participation of the whole of the Japanese people in the ritual.

The worldly participants, however, are limited. Aside from the Emperor, only ladies-in-waiting are allowed in the room to help with the offerings to the divinity. Other selected guests wait outside in a tent. At the beginning of the Heisei era, those guests included the Prime Minister, the Attorney General, the head of the agricultural association, selected parliamentarians, and members of the imperial family.

The immediate symbolism is of thanksgiving and prayer for the realm. Beyond that, Professor Fujimoto stressed the symbolism of the various items present in the room: “The offerings aren’t just important in their own right, but they symbolize ishokuju (衣食住).”

Ishokuju is a Japanese word which combines the three significant elements necessary for subsistence — clothes, food, and shelter — which are expressed in the kimono fabrics, in the offerings, and the platform Fukusuma and Daijokyu, respectively.

Fujimoto discussed the hours when the ritual is held, explaining that night is traditionally the time for appeals to Amaterasu. “The divinities only move during the night, you see.”

Perhaps it’s something to do with anything happening behind closed doors that grabs our attention, but there are many reports, especially in the foreign press, expressing one sided accounts on this Japanese ritual.

Professor Fujimoto himself admits that part of the mystique has to do with the fact that we can’t see what happens behind the curtains. “It’s because you can’t see it that it’s interesting. In that sense, this is connected also to the concept of divinity in Japan: you can’t see it, but you behave like it’s there.”

It appears that part of the hidden aspect has to do with the simple fact that for many centuries it was a ceremony few people participated in. For example, using the old calendar before the Meiji era, the Daijosai normally fell in December.

“Originally, the ceremony was conducted in huts built out of woven fabric like tatami, and on the bare ground, which just had a woven mat over it. It was freezing,” said Dr. Fujimoto.

However, there are those who have taken this a step further and hypothesized that strange occult things occur behind closed doors. Fujimoto explained how this isn’t the case:

“People said the same during the Heisei period because Shinobu Orikuchi, who was an ethnologist, wrote in Madoko Ofusuma that the Emperor during the process becomes one with the divinity. But, in reality, this isn’t the case…. It’s nothing weird, or overly spiritual…. Like many rituals in Shinto, you offer oblations to the kami, you invoke divinity with a prayer.”

There has been some debate on whether the ceremony should also keep in step with the times and cut costs. This year, for example, the size of the Daijokyu was shrunk by 20%, the structure will probably be recycled, and the construction company in charge brought down the budget to ¥900 million JPY (approximately $8.2 million USD).

Professor Fujimoto, however, voiced the concern that the essence of the ceremony should not be lost: “I think it’s fine if it becomes cheaper, but I think it should still be done properly…. The world is becoming more and more ‘instant,’ it shouldn’t become the same with the Emperor.”

ADDITIONAL ARTICLES ON THE EMPEROR AND NEW ERA