Despite Falling ROIs, Calls for Pullout, Why Are Japanese Firms Staying Put in China? 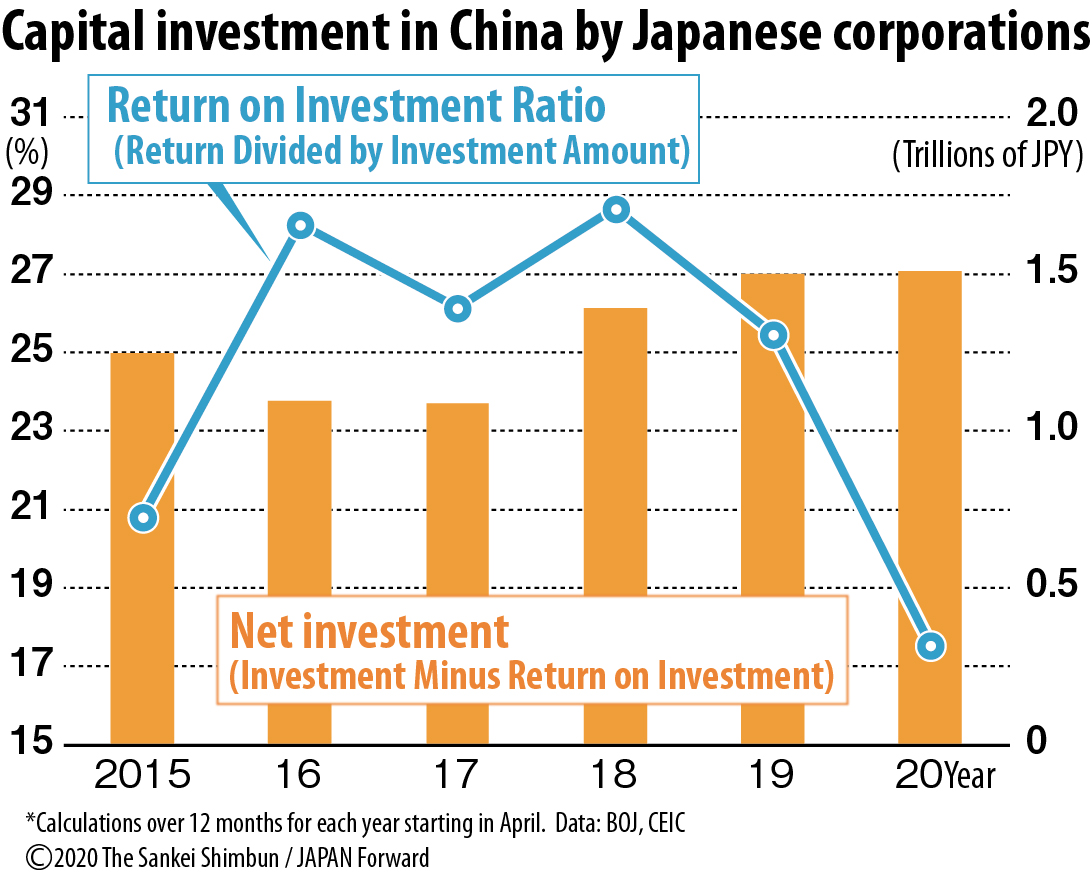 Amid fears sparked by the coronavirus outbreak in Wuhan, China, the Shinzo Abe administration has called on industry to pull out of China. But his call has fallen on deaf ears. Instead, leading Japanese corporations are ramping up investments.

Faced with the fragmentation of supply chains from China due to the pandemic, the Abe administration has encouraged corporations to move production bases, now concentrated in China, back to Japan or to a third country. In April’s first supplementary budget, a total of ¥243.5 billion JPY ($2.67 billion USD) ― part of the government’s emergency economic countermeasures ― was included to subsidize a portion of the cost of building and equipment installation that arises when production bases are relocated. Yet, it appears Japan’s leading companies are not in the mood to leave China.

The total of 12 months for each fiscal year (starting in April) provides the basis for calculation of investment. Profit returned to the parent company in Japan from subsidiaries in China is the main component for calculating the return on investment.

While Japanese corporations have achieved a ratio of about 70% return on their global investments overall, the return on investments in China has been extremely low ― under 30% through 2019.

The downward trend in China picked up speed in 2019, with the monthly rate falling to 14% in April. Annualized, the rate for the preceding 12 months ended up at a mere 17% return on investments.

Cutting back on investment return suggests that profits are reinvested locally. In other words, the profits are being totally relinquished to China, the world’s factory.

By raising net investment in China even in the thick of the global coronavirus pandemic, Japanese corporations have shown that they are increasingly willing to cooperate with China. An example is the Toyota Motor Corporation, which in late February confirmed plans to build a production plant for electric vehicles (EVs), plug-in hybrids (PHVs), and other environmentally-friendly cars in Tianjin, China — an investment totaling ￥130 billion JPY (about $1.2 billion USD) by the Japanese car maker.

This goes to show that the illusion of access to a growing market in China has not weakened among Japan’s leading corporations. Likewise, the Xi Jinping administration is urging investment of foreign capital for the diffusion of EVs and artificial intelligence technologies.

Both EV and AI are advanced technologies that can be diverted to military use. In addition, while AI technologies have been lauded for their role in tracking coronavirus infections, they have also served as key weapons used by the totalitarian regime to oppress ethnic minorities, such as Xinjiang’s Uighurs and Tibetans.

While Japanese corporations may view taking cutting-edge technologies and investing them in China as a business opportunity, their actions run counter to trends in the West, led by the United States, which has warned of excessive dependence on China. The Abe administration should issue a stern advisory to the Japan Business Federation, the de facto headquarters of Japan’s business sector.