The Role of the Japanese Sword in Noh and Kyogen 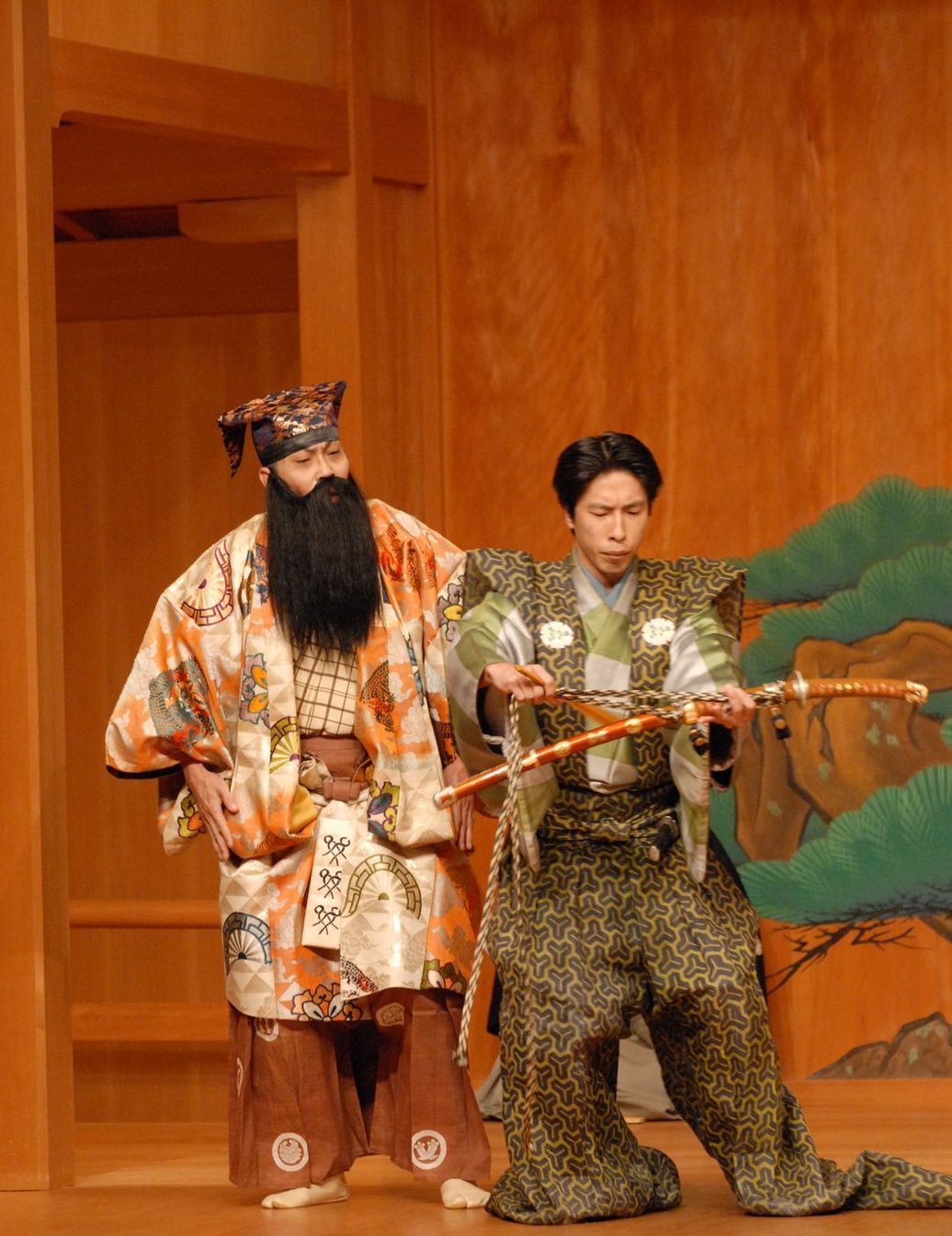 Someone once said that studying the Japanese sword is one of the quickest ways to get a profound understanding of Japanese culture.

Many specialists of other subjects may disagree, but the sword of Japan crosses over into many other aspects of Japan culture, whether as ritualistic religious tools or symbols, various performance arts, part of the mythological origins of Japan, and of course the many fables and samurai war tales. 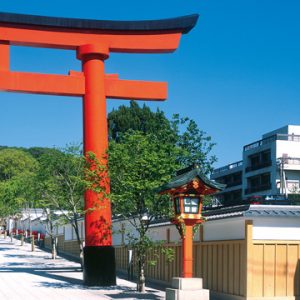 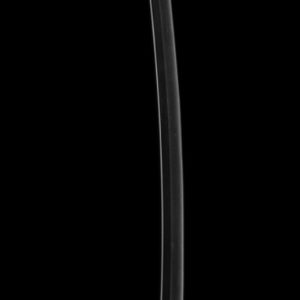 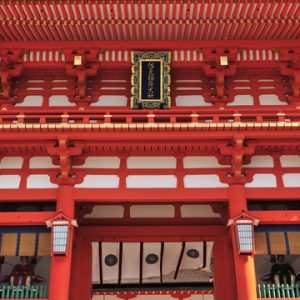 Many people who are familiar with Japan may be aware of the famous performance art of Noh theater. It is said to date back to the 14th century. It consists of very flamboyant productions with masks and bright costumes. Noh plays that center on famous swords are: 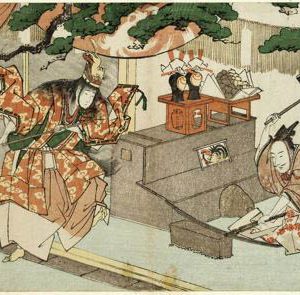 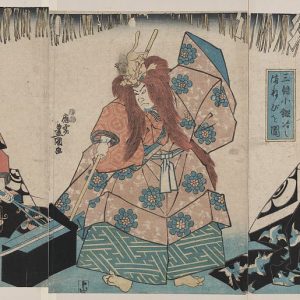 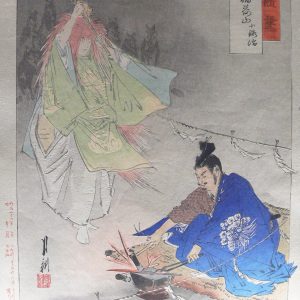 Among the Noh plays is one called Kokaji, the story of the master swordsmith, Sanjo Munechika, who is commissioned by the Emperor Ichijo to make a sacred sword. However, Munechika needed an excellent hammer man in order to make the sacred blade. He then went to the Inari shrine at Fushimi Inari Taisha (Kyoto) and prayed to the gods for help.

Shortly after, a young boy appears and persuades Munechika to let him help by regaling him with tales of Chinese legends and the heroic Prince Yamato Takeru. Munechika eventually agrees. The young boy then tells him to prepare and disappears, only to return transformed into the fox god himself, Inari, and helps him to forge the blade.

On completion, the blade is called Kogitsune-maru and inscribed Kokaji Munechika on the obverse, and Kogitsune on the reverse of the tang. It was passed down between the Fujiwara families until the late Kamakura period, when its whereabouts became unknown. 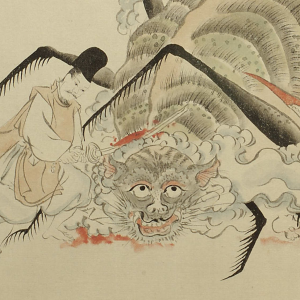 Other Noh tales to do with swords include Tsuchigumo, the tale of a mythical giant dirt-spider-type creature. In the tale, the warrior Minamoto Yorimitsu, famous for slaying the Shuten-doji, is suffering from malaria. While in a fever, a giant monk appears and tries to capture him. Yorimitsu slashes the monk with his famous sword, the Hizamaru, and the monk flees.

The next day, Yorimitsu and his warriors follow the trail of blood until they come to a large mound at the rear of Kitano shrine. Inside the mound was a giant dirt-spider 120 centimeters in diameter. They pull the spider out, eventually killing it. Yorimitsu’s sword is then renamed the Kumokiri-maru. The actual sword said to be the Kumokiri-maru (Hizamaru) is a cultural property of Aichi prefecture, in the Atsuta Jingu Collection. 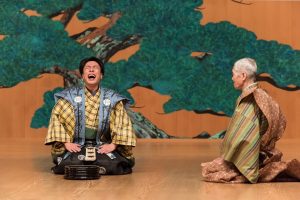 Another traditional performing art of Japan that has its roots in Noh is Kyogen. Kyogen was originally a brief comical interlude in the very long Noh performances. Although Kyogen can still be seen during Noh plays, it has also become recognized as a separate performance art of its own with its own star performers.

Kyogen also has performances that are related to Japanese swords. Two of the performances are named after blades by famous sword makers.

One of the notable performers of Kyogen today is Okura Sentora. Sentora is the 26th generation head of the Okura school. He learned Kyogen from his father, Torahisa (25th generation), and his grandfather, Toratomo (24th generation).

The school is said to originally have come from Nara, and to date back to the 13th century, when it was founded by a Buddhist monk named Gene Hoin. The Tora part of their name is said to have been passed down from the 11th-generation head Yaemon (1531-1596), who received the name Toramasa from the warlord Oda Nobunaga for his services to Kyogen.

Sentora says: “The modern era started from the Meiji period (1868-1912?) and continues up to today (Reiwa era: 2019~) However, by the end of the Edo period (1600-1868), the samurai had ruled for 700 years. It can be seen that the Kyogen plays, such as Awataguchi and Nagamitsu, appear in the Muromachi period (1392-1596) and illustrate peoples’ desire to own famous named swords, and the potential for them to be tricked because of the vague or ambiguous terminology related to swords.” 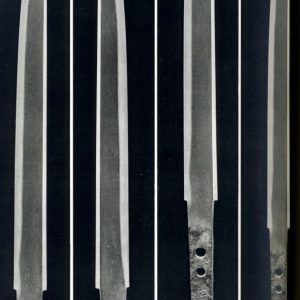 During the Edo period there was stiff competition between daimyo for the ownership of exquisite items.

Hilarity ensues as Taro repeats the various descriptive sword terminology he has been told for such a blade. However, he has no idea that it relates to swords and mistakenly thinks he is describing a human being — i.e., ashi ga nagai (long legs). 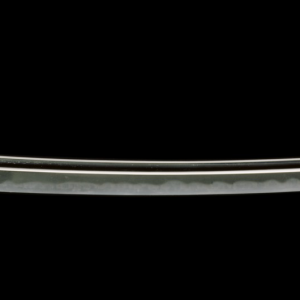 In the next tale about a Bizen Osafune Nagamitsu tachi, a conman is caught trying to steal a Nagamitsu tachi from a young countryside samurai official who is visiting Edo. The thief sidles up to the samurai, and stealthily ties the belt of the tachi to his own waist. When the young samurai tries to walk away while holding the sword, the conman pretends that it is his own sword and accuses the young samurai of trying to steal the sword. An argument ensues that is intervened by an officer of the shogunate. (Also see image at top of article.)

The officer separates the two men and takes custody of the sword. He interviews both the men separately. He starts with the samurai official, and asks him to describe the blade. The conman listens in on the answers, and when questioned himself repeats them, although in a rather unclear manner.

However, the officer is also not familiar with sword terminology, and is confused by the situation. The young samurai realizes that the thief is repeating his answers, so when he is asked what the length of the blade is? The young samurai whispers the answer into the officer’s ear, apart from saying “Na” rather loudly twice.

When the thief leans into the officer’s ear and just shouts “Na” twice, the officer realizes he is the culprit. The thief tries to run, but both the officer and the official grab him by the jacket, which he slips out of, revealing a whole stash of stolen goods around his person.

For other articles on Japanese swords, see the articles in our Sword Column at this link.