This article—the 3rd in a 4-part series—has been updated from its original version in the March 2017 issue of Seiron Magazine.

Kick Out US Bases from Okinawa and Jeju, and China Will Build Their Own

Policymakers in the United States are sharply divided in their views of China.

Those who take a naively optimistic view of the Chinese military’s activities are known as “panda huggers.” For many years, the panda huggers were the majority inside Washington, DC. This group held great sway within the administration of Barack Obama.

Conversely, the “dragon slayers”—a longtime minority in Washington—are deeply suspicious of the Chinese Communist Party (CCP). Reports are that the dragon slayers are playing a leading role in crafting China policy within the Trump administration.

The theoretical representative of the dragon-slaying China hawks is Richard Fisher Jr., a senior research fellow in Asian military affairs at the International Assessment and Strategy Center. In an interview with the Sankei Shimbun Special Washington Correspondent Yoshihisa Komori published in the December 2016 issue of WiLL magazine, Fisher said:

The Chinese Communist Party’s ultimate aim is to force the near-total surrender of Japan—to eliminate the Japan-US alliance, and to impose extreme limitations on Japan’s capacity to defend herself. It goes without saying that the CCP does not want Japan to possess nuclear weapons. Beyond that, the country of Japan will be incorporated, little by little, into China’s long-term development plan. This is the goal. In other words, China wants to make Japan a dependent nation of the Chinese Empire.

The maneuvering on the Okinawa issue is thus being set up in accordance with this broader Chinese national strategy.

It is a widely-known fact that China has been stirring up resentment against Japan among the residents of Okinawa as part of China’s long-term foreign-policy machinations. China’s Okinawa tactics resemble the political combat formula used in Taiwan to foment anti-government movements there, all as part of China’s front-line reunification efforts against the island republic. It is also nearly identical to China’s decades-long espionage and sabotage work in the Philippines to erode the US-Philippines alliance. 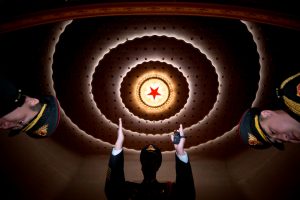 As it schemes for control of the Asia-Pacific sea lanes, Beijing operates under its “Proactive Defense Strategy for Chinese Coastal Waters,” which was formulated in the mid-1980s. The operations to penetrate Okinawa, Taiwan, South Korea, the Philippines, and elsewhere from within their respective domestic politics are being carried out based upon the unmistakable global strategy of the CCP.

The CCP government controls a mainly continental nation-state with an army-centric military. Since Deng Xiaoping’s promotion of reform and opening in the late 1970s, however, the Chinese have become aware of the importance of defending the sea lanes used in part for overseas trade. Under People’s Liberation Army General Liu Huaqing, commander of the PLA Navy from 1982 to 1988, the Chinese military strengthened both its navy and its missile units. It shifted from the previous policy of coastal defense to one of a more developed military prowess directed at China’s coastal waters and beyond, into the open sea.

Under the “Proactive Defense Strategy for Chinese Coastal Waters,” the Chinese built up a navy powerful enough to control the waters from the Chinese littoral out to the “first island chain.” This term refers to an imaginary line running from the Ryukyu Islands of Japan through Taiwan and down to the Philippines. After controlling out to the first island chain, the PLA Navy would then seek to expand its control eastward to the “second island chain,” another imaginary line running from the Kurile Islands along Japan and down to the Marianas and Caroline Islands. By 2049—100 years after the founding of the government of the People’s Republic of China—the PLA Navy would have a deep-water fleet with aircraft carriers and state-of-the-art weaponry equal to those possessed by the US Navy.

The Real Conflict: PRC and USA

The most powerful enemies confronting China’s plan to invade the Asia-Pacific are the United States and the US-Japan alliance. It is for this reason that the PRC is coordinating anti-US base movements throughout Asia—including on Okinawa. China’s goal is to eliminate the entire American military presence throughout Asia.

Over the past eight years, the Obama administration made deep cuts in the US military intelligence budget. This hampered the ability of American forces to collect and analyze intelligence on Chinese operations in the CCP’s ongoing fight against US bases in the region. This neglect provided material support to Chinese espionage and subversion activities.

In May of 2015, I visited Saipan, which is a territory of the US. I was surprised to find that there is a sizable Chinese presence there. There are Chinese restaurants all along the main streets of Saipan, and many of the people working in the Chinese businesses are migrant workers from Fujian province on the Chinese mainland. In my conversations with people inside the Saipan territorial government, I found that a massive influx of Chinese tourists was greatly contributing to the local economy, but that those affiliated with the US military bases on Saipan were very much concerned by this.

There are gigantic military supply vessels anchored off the coast of Saipan. These warships are for bringing weapons, ammunition, and fuel to the US military forces in Japan in the event of an outbreak of hostilities. In other words, Saipan is a key strategic point for allowing the US forces based in Japan to wage a protracted war, and this same Saipan is being steadily swallowed up by China.