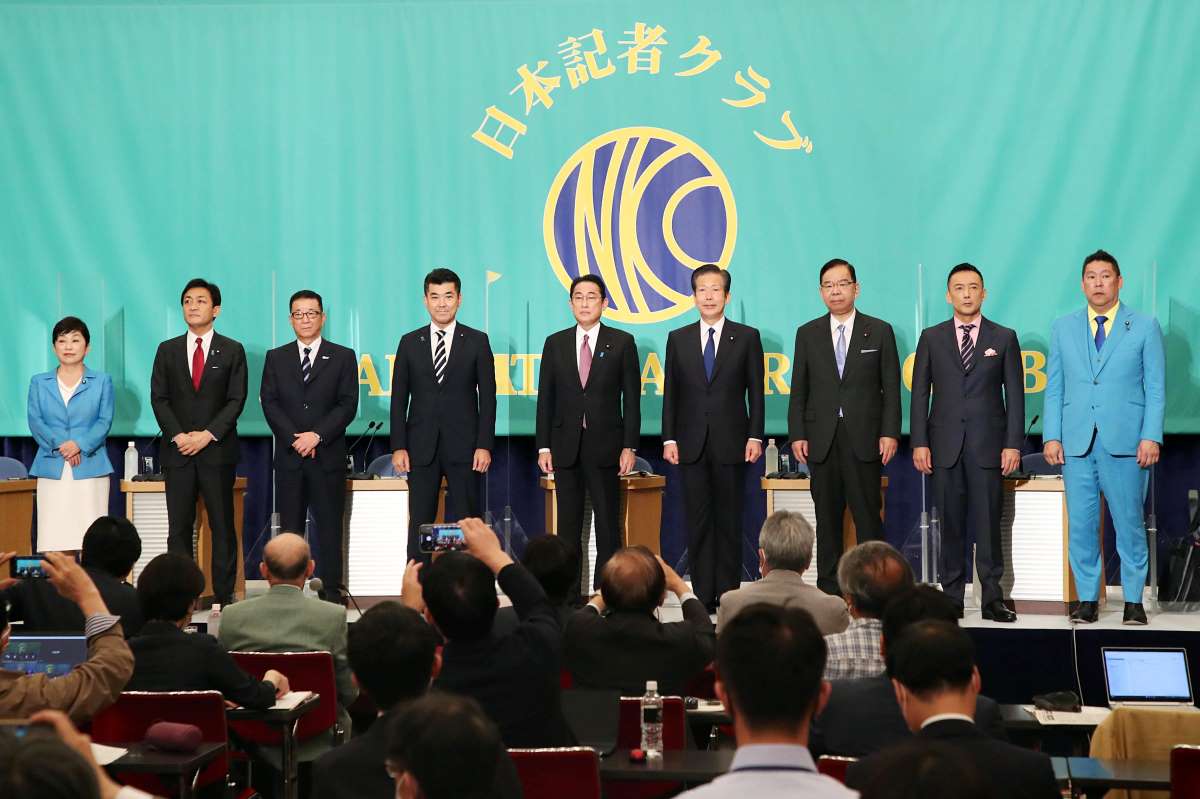 [House of Councilors election 2022] Party leaders pose for a commemorative photo at the party leaders' debate hosted by the Japan National Press Club in Tokyo. (June 21, 2022. Photo by Takumi

The Upper House election war of words officially began on Wednesday, June 22. Without exception, the candidates and the political parties are out appealing for support from voters by ardently promoting the policies and political positions they favor.

Such efforts are to be expected, but we would like to point out one thing: It has been said the Upper House should function as a “bastion of common sense.” Therefore, the men and women who serve in that elective body should be chosen with that in mind.

Hopefully, the various candidates and political parties will work to create an Upper House that fulfills its common sense role.

No Excuse for Putting Off Human Rights

The latest ordinary session of the Diet adjourned on June 15. However, in dealing with some issues, the Upper House must be said to have lagged behind the House of Representatives.

For one thing, it put off adopting a resolution concerning the serious human rights situation in China.

The House of Representatives adopted such a resolution on February 1, although it was admittedly weak on several counts, including avoiding mentioning China by name in the text.

Nonetheless, a majority of the members of the House of Representatives voted for the resolution that referred to the “serious human rights situation” in such places as the Xinjiang Uyghur Autonomous Region, Tibet, Inner Mongolia (south Mongolia), and Hong Kong as a “threat to the international community.”

Parliaments in many Western nations have already adopted resolutions concerning the human rights situation in China. Yet, although Japan is a neighbor, it has long continued to procrastinate in doing so.

The adoption of the resolution by the House of Representatives finally put the Japanese Diet on the record concerning this issue for everyone at home and abroad to see.

Meanwhile, Upper House legislators became mired down in fiddling with details of their own resolution, which differed from the version adopted by the House of Representatives. In the end, it became quite vague and lacking in punch.

We have heard the excuse that the process was derailed when Russia started invading Ukraine. But that doesn’t stand up to reason. Whether or not they are reelected or defeated in the coming election, we would ask the members of the Upper House who are responsible for the delay, “Aren’t you ashamed of yourselves?”

Members of the House of Representatives face the possibility of being out of work if a general election is called during their term of office. Members of the Upper House are guaranteed their six-year terms.

Tackling issues involving serious human rights violations is a responsibility for parliaments in democracies. And this by no means constitutes interference in the domestic affairs of other nations. That is especially true in regards to a China that militarily threatens Japan.

We would like to see an Upper House that truly respects and reflects the positions of the oppressed and the Japanese people.

When the Diet reconvenes following the election, the Upper House should address this issue without delay and quickly adopt a resolution concerning the human rights situation in China.

The Duty of Constitutional Reform

The Upper House also did not fulfill expectations regarding the issue of constitutional reform.

Both houses of the Diet have established standing committees on the Constitution. But in comparing the respective contents of the deliberations on constitutional reform, it can hardly be claimed that the Upper House has been doing better than the House of Representatives. Is that the way it should be?

This election provides a golden opportunity for the Upper House to restore its status as the bastion of common sense.