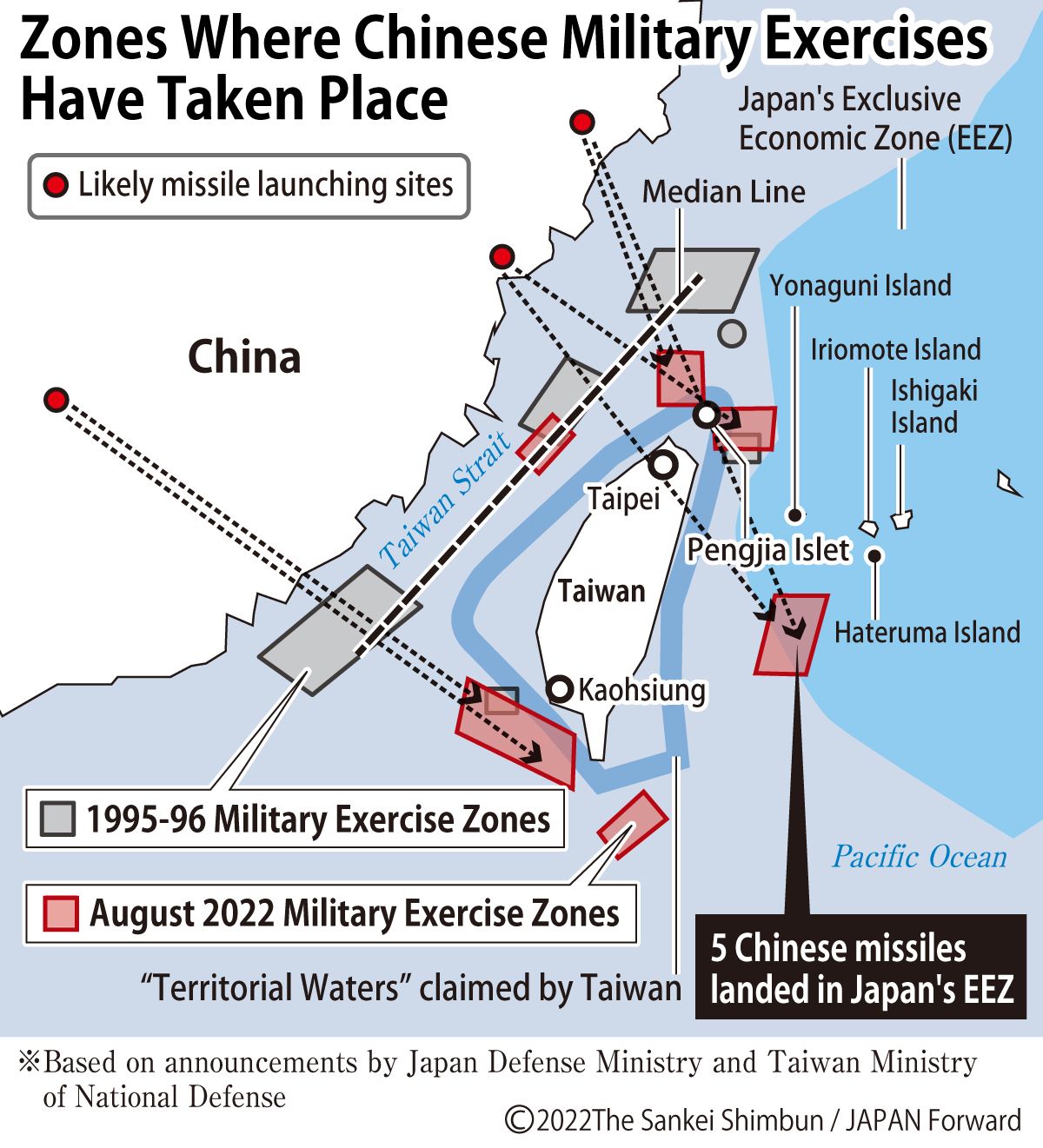 From immediately after the visit by United States Speaker of the House Nancy Pelosi to Taiwan, the People’s Liberation Army (PLA) of China has engaged in massive military exercises in the vicinity of Taiwan, recklessly ratcheting up tensions in the region.

According to the Taiwan authorities, on August 4 alone the PLA launched 11 ballistic missiles. Japan estimates that five of these landed in its exclusive economic zone (EEZ).

Even North Korea, which makes a regular practice of firing missiles into waters near Japan, has never hurled so many missiles into Japan’s EEZ in one day. Beijing’s behavior is aberrant, to say the least.

Standing Up to Intimidation

The current situation clearly demonstrates that, in the event of a Taiwan contingency, chances are extremely high that Japan will be forced into military involvement.

The dropping of Chinese missiles into Japan’s EEZ should be viewed as a simulated attack on Japan. To simply stand idly by and pretend it never happened would be unforgivable.

During an August 5 meeting with Speaker Pelosi in Tokyo, Prime Minister Fumio Kishida explained that Japan had forcefully condemned and protested China’s errant missile targeting. He also reaffirmed that close cooperation between Japan and the United States is essential for the maintenance of peace and stability in the Taiwan Strait.

The previous day, South Korean President Yoon Suk-yeol had declined to meet Speaker Pelosi in person when she visited Seoul, settling instead for a phone conversation. If that was out of concern about China, Yoon was definitely sending the wrong signal.

Let’s not forget that the root of trouble is China’s blatant attempts to change the status quo through the use of force.

China announced that its military exercises would continue through August 7. As part of these exercises, the PLA’s Eastern Theater Command established six air and maritime zones in areas around Taiwan where it has carried out live fire joint combat drills. The Chinese media has referred to the arrangement as a “blockade of Taiwan.”

However, some of these exercises were taking place in waters very close to Taiwan, and the ever-present danger of an accidental clash has made the Chinese actions extremely dangerous.

A Taiwan crisis would be a Japan crisis, and could quickly create the danger of war in East Asia.

Not a Worth Security Council Member

According to Japanese government sources, at least four of the Chinese missiles were launched directly over Taiwan. This kind of thuggish behavior on the part of a permanent member of the United Nations Security Council is unforgivable.

President Xi Jinping and other Chinese leaders should act with cool heads. Speaker Pelosi’s visit to Taiwan was completely lawful, and the Biden administration has reiterated its support for the “one China” policy. The United States government has not come out in support of an independent Taiwan.

During a telephone conference with Biden on July 28, Xi employed threatening language regarding the Taiwan issue. He said US support for Taiwan’s positions was “extremely dangerous,” threatening: “Those who play with fire will perish by it. It is hoped that the US will be clear-eyed about this.”

With the 20th National Congress of the Chinese Communist Party due to be held this fall, no doubt President Xi is determined not to appear weak in dealing with the United States.

But the fact is that it is China that must stop playing with fire.