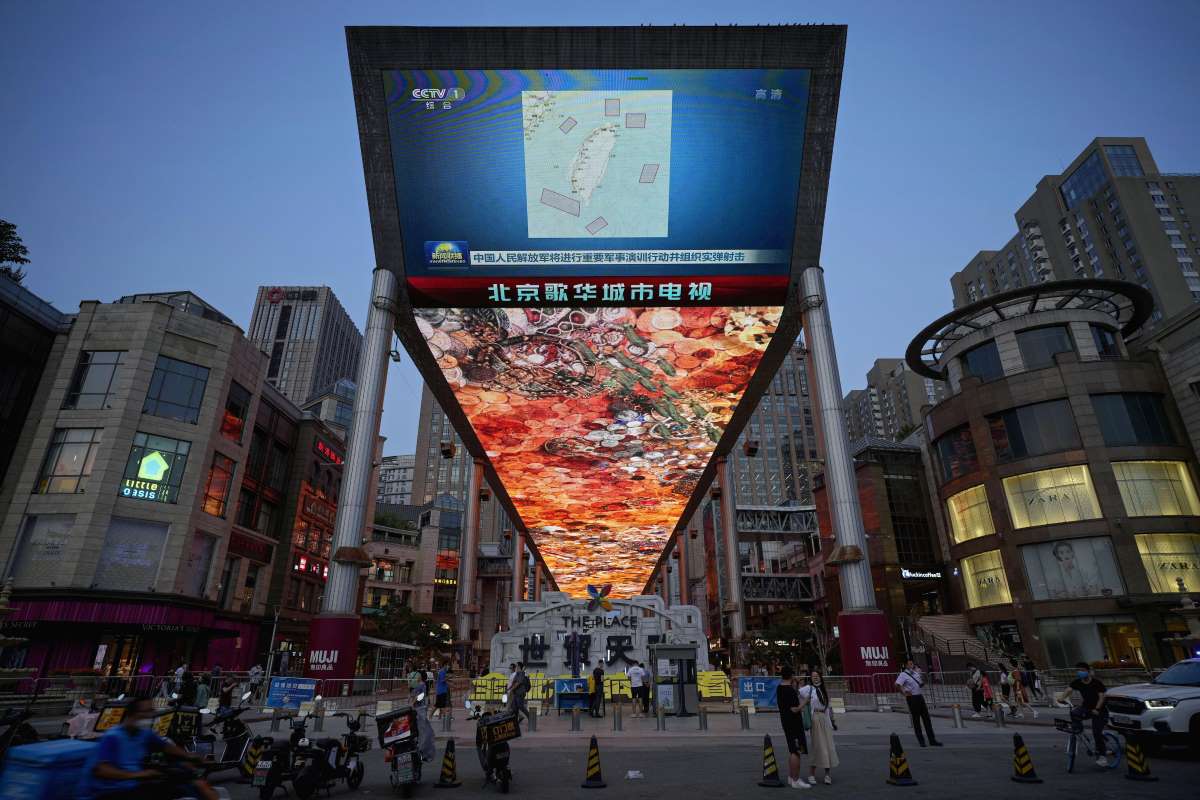 A giant screen in Beijing on August 3, 2022 broadcasts the "important military exercises" the Chinese PLA set up around Taiwan (Kyodo).

Last week I took a call from a reporter, telling me the horrifying news that Japan was under attack from China.

The journalist was from the BBC, where I used to work. She explained that five ballistic missiles had hit Japan’s exclusive economic zone. Fortunately, she added, they all landed in the sea. We agreed that although the situation was alarming, it didn’t appear to mark the imminent outbreak of war.

The journalist then invited me to take part in live broadcasts to cover the crisis. She was right to emphasize the severity of the threat. It is chilling to consider what might have happened if a Chinese missile had hit a Japanese Coast Guard vessel, or even struck an island.

Fortunately, this was not actually an “attack” by the People’s Republic of China, although it was a vivid illustration of the danger posed by the PRC, following a visit to Taiwan by the American politician, Nancy Pelosi.

Defense Minister Nobuo Kishi looked solemn when he stood before reporters in Tokyo, emphasizing that the incident was “a serious problem that affects our national security and the safety of our citizens”.

The timing was awkward for Prime Minister Fumio Kishida. Just days beforehand, he had given a speech at the United Nations in New York, in support of a treaty on the non-proliferation of nuclear weapons. He chose to cast himself as the leader of a peace-loving nation, intent on de-escalating the risk of war.

Ms Pelosi visited Tokyo on August 5th, following her trip to Taiwan and a stop off in Seoul. Mr Kishida – by that stage back from America – agreed to host her for breakfast.

At a press event afterwards, they shook hands for the cameras and there were positive words about the importance of a “free and open Indo-Pacific.”

Ms Pelosi echoed President Joe Biden by saying “the world faces a choice between democracy and autocracy” adding that “America’s determination to preserve democracy in Taiwan and around the world remains ironclad.”

For Mr Kishida, the rhetoric was familiar. After all, he leads the Liberal Democratic Party of Japan, which has much in common with democrats in the US and Taiwan.

This meant that he had little choice but to meet Ms Pelosi and wish her well. (His approach contrasted with that of South Korea’s President Yoon Suk-yeol, who avoided an encounter with Ms Pelosi in Seoul by insisting he was “on vacation”).

When the presenters on BBC TV and radio programs asked me to explain the politics, I said that Mr Yoon was trying not to upset Xi Jinping and was aiming to “sit on the fence” with regard to Taiwan. I also said I perceived a gap between Mr Kishida’s public gestures and his true feelings.

Such discrepancies are common in Japan, where people expect their leaders to present a polite front in public – known as a tatemae 建前 or “façade” – while hiding their true emotions, known as honne 本音, or “true sound”.

In my view, Mr Kishida’s real view on Ms Pelosi’s trip to Taiwan was similar to that of Joe Biden: disapproval. In July, when asked about Ms Pelosi’s trip, President Biden said: “The military thinks it’s not a good idea right now.” In other words: “She shouldn’t go but there will be all sorts of trouble if I try to ban her.”

If Mr Biden could have restrained Ms Pelosi, then I expect he would have taken that course and the same goes for Mr Kishida, although it’s not his job to stand in the way of foreigners’ travel plans to other countries.

On the other hand, as I explained on air, it could have been seen as a capitulation to China if Ms Pelosi had canceled her trip to Taiwan in the wake of threats. The US and Japan did not want to give China an excuse to feel emboldened in its intimidation of Taiwan.

China regards the island as a breakaway province, to be reunited with the motherland, peacefully if possible but by force if necessary. Neither Japan nor the United States has a formal diplomatic relationship with Taiwan.

For Defense Minister Kishi, the timing of the crisis was awful. He is clinging to his job after it emerged that he has had financial links with Korea’s Unification Church – commonly known as the Moonies.

A disgruntled relative of a member of the Moonies is under arrest for killing former Prime Minister Shinzo Abe. Mr Kishi is Mr Abe’s brother. Over the weekend, some sections of the Japanese media have been digging dirt on Mr Kishi, which suggests that his days in office are numbered.

From a security perspective, this is a shame. Japan and America have just witnessed at first hand how China behaves when it becomes angry.

Quite rightly, Japan lodged a protest through diplomatic channels and signed a G7 statement condemning the military drills.

On one level, China’s fireworks were a propaganda coup and they generated worldwide TV attention. On CGTN, missile launches were accompanied by dramatic music, although I noticed that the picture editors at the BBC muted this soundtrack in their bulletins.

Another audience was watching the display closely – spies.

They can now use fresh, pin-sharp images from satellites to study how the People’s Liberation Army operates in battle mode.

Tellingly, at his speech at the UN, Mr Kishida urged countries to “enhance transparency on their nuclear capabilities”. Perhaps China made some of its own nuclear ambitions more transparent through its drills around Taiwan.

In normal circumstances, now would be an ideal time for generals in Tokyo to brief the Defense Minister on what they have discovered and help him to appraise the risks to Japan. Yet if Mr Kishi is about to be kicked out of a job, another politician will need to be brought up to speed on the issue, after passing the highest level of security clearance.

Prime Minister Kishida remained in the public eye on Saturday August 6th, as he returned to his home city of Hiroshima to mark the the anniversary of the atomic bombing, 77 years ago.

He brought with him UN Secretary-General António Guterres, who said: “Nuclear weapons are nonsense. They guarantee no safety, only death and destruction.”

Mr Guterres added: “Crises with grave nuclear undertones are spreading fast” in the Middle East and on the Korean Peninsula. “We are one mistake, one misunderstanding, one miscalculation away from Armageddon.”

In his speech at the Hiroshima Memorial Park, Mr Kishida said: “Japan will walk its path toward a world without nuclear weapons, no matter how narrow, steep or difficult that may be.”

Mr Kishida will host a G7 meeting in Hiroshima in May 2023. He intends to deliver his non-nuclear pledge in front of the peace monument and encourage his fellow leaders “to unite to protect peace and an international order based upon the universal values of freedom and democracy.”

That is just the kind of phrase that Nancy Pelosi has been using on her trip around Asia. However, by the time of the summit next year, she’ll be safely home in California or Washington. It will then be Mr Biden’s turn to deliver a speech in front of Hiroshima’s Atomic Dome, while Japan remains – quite literally – in the firing line.