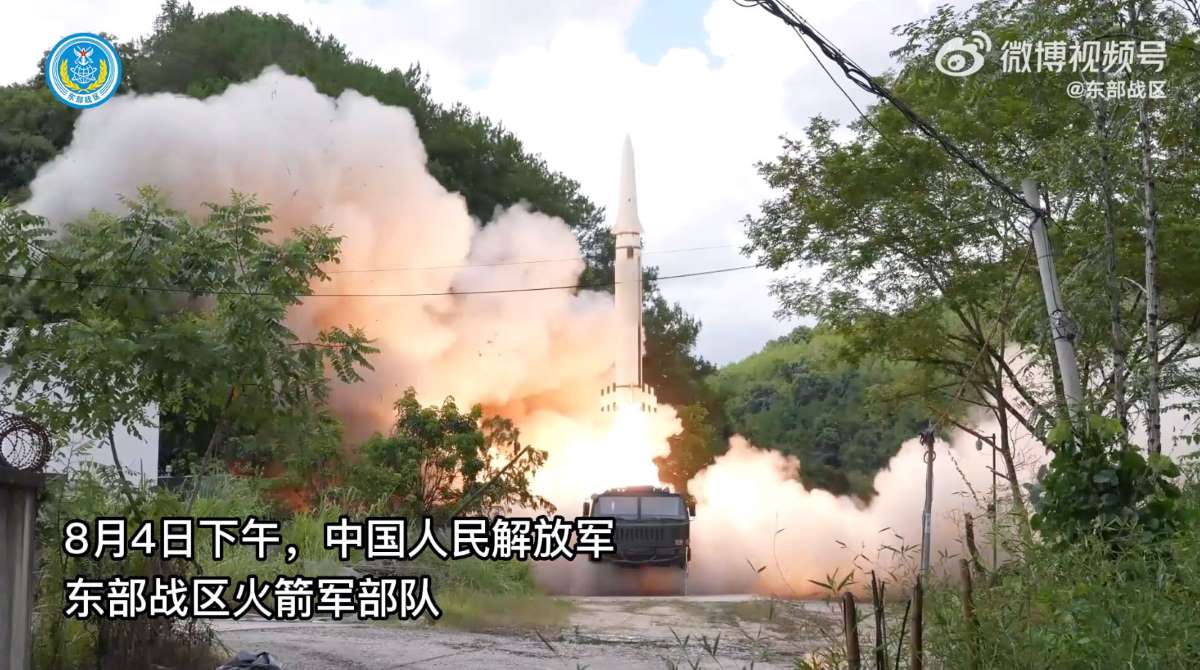 China televises the firing of ballistic missiles into "training" areas around Taiwan and in Japan's EEZ. August 4, 2022. Photo from Weibo.

On Friday, December 2, the ruling Liberal Democratic Party (LDP) and its junior partner Komeito agreed that Japan should acquire counterstrike capabilities. This would allow Japan to launch attacks on missile bases and other installations within the territory of countries threatening the Japanese homeland.

This is a crucial, historic decision that rectifies our nation’s mistaken postwar defense policy. Protecting Japan and the Japanese people, come what may, is the greatest duty of any political party. The decision by the ruling parties deserves high praise.

In the past, the Komeito has often acted as a brake on the acquisition of needed defense capabilities. Now it has joined hands with the LDP to endorse the possession of counterstrike capability. This can be viewed as the Komeito's reorientation toward true pacifism that prevents war through deterrence.

Now, based on the agreement of the two parties, acquisition of this capability must be incorporated into the three major defense documents currently being finalized. Significantly, those include the National Security Strategy. It must also see that the change is promptly reflected in equipment, operations, and training of the Self-Defense Forces.

The government has taken the position that, based on the 1956 "Unified View," it is possible to possess a counterattack capability. This is within the scope of the nonaggressive defense limitation required by Article 9 of the Constitution.

However, as a policy decision, the government did not provide the Self-Defense Forces the ability to counterattack. And up until now the situation has been so distorted that we have been totally reliant on the United States military to protect Japan should we be attacked.

China's military is expanding at a breakneck pace. And North Korea also possesses many missiles. The US military may be powerful, but whether it would launch a counterstrike at Japan’s behest remains unknown.

With Japan’s neighbors boasting about their nuclear and missile capabilities, it is imperative that Japan possess a certain amount of counterstrike capability for deterrence strength.

In September 2020 just before he left office, then-Prime Minister Shinzo Abe considered the ever more sophisticated performance capabilities of missiles developed by other nations in the region. Summing up the dangers, he said, "There is a question of whether it is possible to protect and defend the lives and the peaceful livelihoods of the Japanese people only by enhancing our interception capability."

In effect, Abe was saying that without counterstrike capability, a prime minister would not be able to defend the nation.

The implications of this statement are profound. Prime Minister Fumio Kishida and the ruling parties are at last responding to Abe's warning.

Some who argue against possessing a counterstrike capability claim it is a violation of the "exclusively self-defense" principle. But that is an irresponsible position that does nothing to protect the Japanese people.

Those opposing the possession of counterstrike weapons by hiding behind a rhetorical shield of "exclusively self-defense" that blithely ignores the immediate challenging security environment. Meanwhile, focusing solely on how to derail the new policy prevents the SDF from adequately performing its mission. In the end it promotes a fallacy that could do irreparable harm to the nation.

Disclosing the details of the timing and possible targets for use of a counterstrike capability is out of the question. That would benefit an invading force, and it is reasonable that the ruling party agreement avoided such details.

It is sufficient to explain that, in accordance with international law, preemptive strikes will be avoided. And counterstrike attacks will be limited to "military targets."