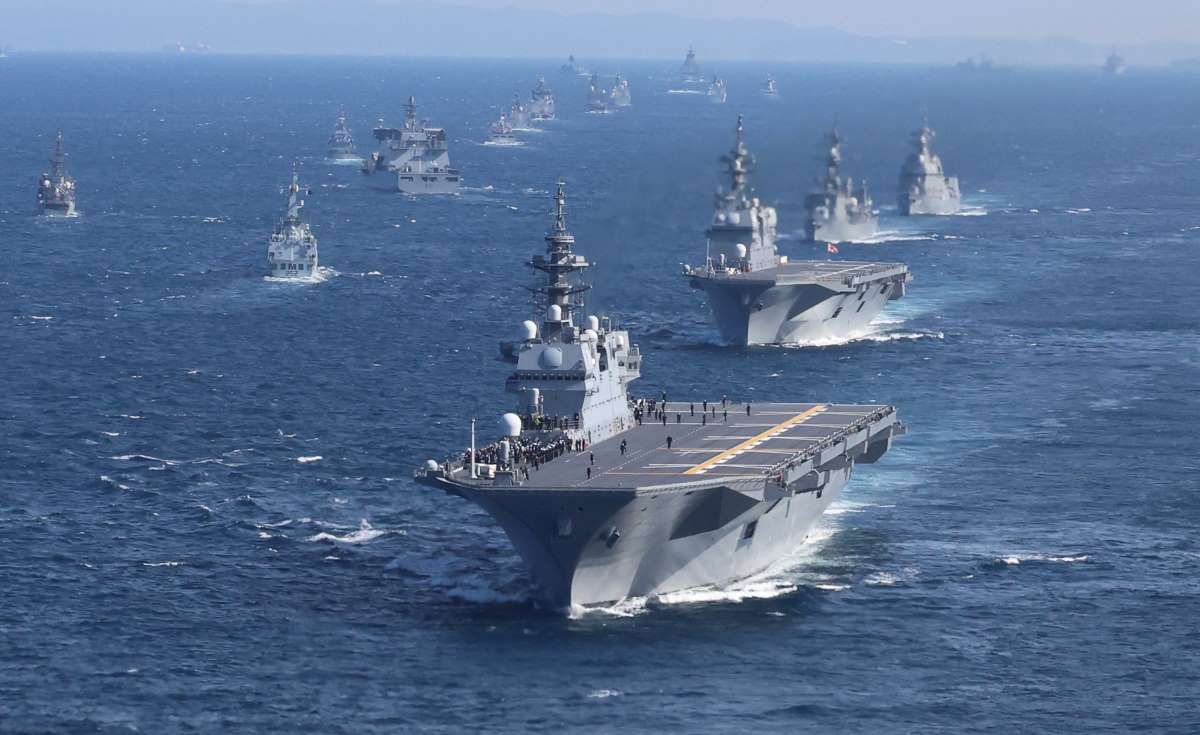 PM Fumio Kishida aboard the escort ship Izumo helicopter carrier leading the international fleet review in Sagami Bay off the coast of Kanagawa Prefecture on the morning of November 6, 2022. (© Maritime Self-Defense Force by Ataru Haruna via helicopter)

The events of the summer of 2022 only added greater definition to the security threats facing Japan. In August, Beijing, in response to Speaker Pelosi's visit to Taiwan, mounted a dress-rehearsal of a blockade strategy aimed at coercing unification.

And, in September and October 2022, Kim Jong Un went on a missile firing spree, featuring ICBM and MRBM launches. The MRBM test on October 4 flew over Japan before landing in the Pacific. It was the first such launch since 2017. Provocations on the Peninsula have continued into November.

The response in Japan has been to intensify the ongoing security debate. In 2021 during the Lower House elections, the ruling Liberal Democratic Party (LDP) campaigned on a platform calling for a 2% increase in defense spending. Following the LDP's election victory, Prime Minister Fumio Kishida committed his government to a substantial increase in defense spending over the next five years.

At the same time. The Kishida government is in the process of reviewing Japan's three national security documents. Those are the National Security Strategy, the National Defense Program Guidelines and the Mid-term Defense Plan. The process has engaged former top government officials and leading security analysis and academics.

These revised defense documents are expected to be released by the end of the year.

Going forward, the critical issue for Japan and the Japan-United States alliance will be strengthening deterrence in the face of intensifying challenges posed by North Korea and China to security in Northeast Asia, and to the rules-based order in the broader Indo-Pacific. This will require both enhancing Japan's own defense capabilities and strengthening alliance-based ties with the United States, South Korea, and Australia.

As for enhancing Japan's own defense capabilities, the political debate has overwhelmingly focused on North Korea, revolving around the need to strengthen deterrence by acquiring counterstrike capabilities.

This has been reflected in the report of the government's advisory panel, chaired by former ambassador to the United States, Kenichiro Sasae,

Options On the Table

Among the counterstrike options now being considered are the updating of Japan's Type 12 surface to ship missiles. The update would extend their range from 200 to 1000 kilometers. In addition, the acquisition of Tomahawk missiles from the United States, as well as the development of hypersonic missiles (more on hypersonics below), are being considered.

There are also reports of interest in the acquisition of attack drones. Additionally, the development of a Type 12 missile for submarine launch has been raised.

Japan's acquisition of counterstrike capabilities should be both welcomed and fully integrated into the wider US-Japan alliance-based integrated deterrence architecture.

Deterrence is also being strengthened by the recent expansion of the Japan-Australia security relationship. The relationship has been built on the Joint Declaration on Security Cooperation 2007, the Special Strategic partnership of 2014. This was expanded with the Reciprocal Access Agreement of January 6, 2022.

And now on October 22, Prime Ministers Kishida and Anthony Albanese have signed a revised version of the Joint Declaration on Security Cooperation.

The agreement commits the two governments to "strengthen exchanges of strategic assessments…and intelligence cooperation." And it calls on them to "consult with each other on contingencies that may affect our sovereignty and regional security interests, and consider measures in response."

Shared strategic interests are set out. They support a rules-based order in a free and open Indo-Pacific, the peaceful resolution of disputes, and maintenance of "a favorable strategic balance that deters aggression and behavior that undermines international rules and norms."

Complementary Policies Within the Alliance

At the same time, Japan and The United States have moved toward the alignment of their respective strategic policy documents. This strategic alignment became manifest at the 2019 Security Consultative Committee (2 plus 2) meeting. A shared commitment to support a free and open Indo-Pacific was announced at the time. More recently, in the January 2022 SCC 2 plus 2 emphasized a commitment " to constantly modernize the Alliance…by fully aligning strategies and prioritizing goals together to address evolving security challenges in an ever more integrated manner."

At the same time, Japan welcomed the AUKUS agreement. And the United States, in turn, welcomed Japan's growing security ties with Australia as reflected in their Reciprocal Access Agreement.

Strengthening deterrence is now a leitmotif of alliance-based diplomacy and security cooperation in the Indo-Pacific region.

In early November, the 2022 Malabar exercise, hosted by Japan and involving the navies of Japan, the United States, Australia, India and the United States, kicked off in waters off the Kanto region. Significantly, this year's exercise marks the third time that all Quad-based partners have participated.

Japan's Rear Admiral Izuru Ikeuchi observed "this exercise embodied the united will of the four countries toward the realization of a "Free and Open Indo-Pacific." Similarly, US Navy Rear Admiral, Michael Donnelly, commander of the Carrier Strike Group Five, commented that "Now it is more important than ever for the forward deployed Carrier Strike Group to work closely with other maritime forces and deter all who challenge a free and open Indo-Pacific."

Deterrence was again underscored in the Phnom Penh Statement on US-Japan-Republic of Korea Trilateral Partnership for the Indo-Pacific of November 13. The statement committed the parties to an "unprecedented level of trilateral coordination…in implementing "our approaches to the Indo-Pacific," and "to strengthen deterrence."

The document also expressed a strong opposition to "any unilateral attempts to change the status quo in the waters of the Indo-Pacific."

The statement is notable for the alignment of South Korea with long-standing Japan and United States strategic objectives with respect to a free and open Indo-Pacific. This policy statement follows on trilateral anti-submarine warfare exercises at the end of September. And the trilateral held ballistic-missile defense and air exercises in October.

A concluding thought. Deterrence could be further enhanced by Japan's participation in the AUKUS agreement.

Putting aside the nuclear-submarine component of AUKUS, with a boat-arrival date sometime in the coming decade at best, the present-day and immediate future impact of the agreement is the commitment to "significantly deepen cooperation on a range of security and defense capabilities."

Today, this includes cooperation in the development of hypersonic missiles and electronic-warfare capabilities. These are now under study in Japan in its defense and security review. By participating in such high-tech research efforts Japan would significantly strengthen its defense capabilities and enhance deterrence across the Indo-Pacific.

Clearly, the challenges posed by North Korea and China to a rules-based order in the Indo-Pacific are significant and accelerating. Meanwhile, expanding and enhancing deterrence is central to the maintenance of stability and security across this broad region. And Japan is now playing an important role in this process.