EDITORIAL | Destroying Artworks, Environmental Activists are No More Than Eco-Terrorists 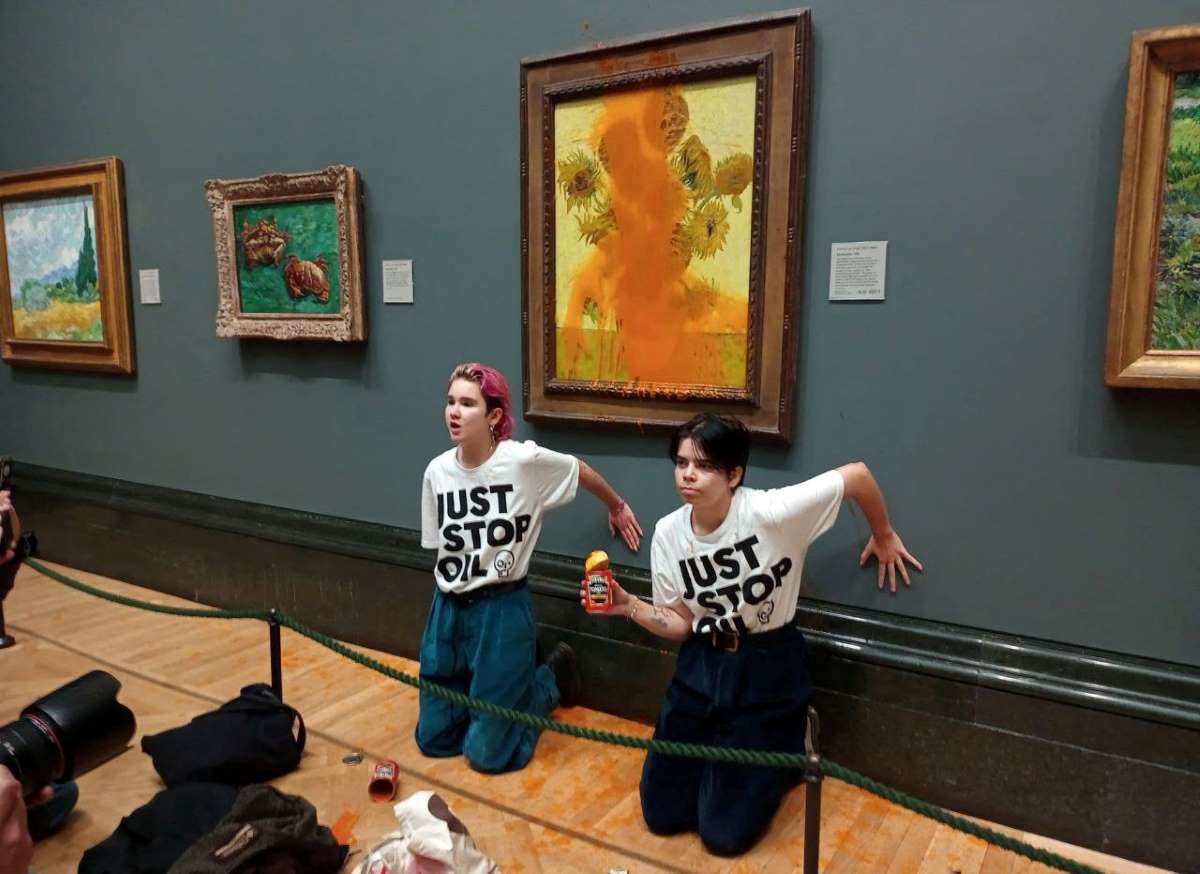 After throwing soup at a van Gogh's painting "Sunflowers" at the National Gallery in London, Britain, members of the group Just Stop Oil glue their hands to the wall. (© Just Stop Oil/Handout via REUTERS)

All these attacks have been carried out by individuals with a perverted sense of justice. Under the guise of environmental activism, they engage in destructive behavior referred to as "eco-terrorism."

Their argument is based on the rhetorical question: "Which is more important, a work of art or human lives?"

Of course, both are important. These are not things that can be superficially compared or ranked.

We cannot legitimize acts involving wanton destruction of artworks by individuals who consider environmental issues of overriding importance. Exactly the same would apply to someone who believes art to be more important — destruction of our planet would not be allowed.

Destruction of Artwork for Any Reason is Unvarnished Criminal Act

Regardless of the arguments made by those who perpetrate such destruction, their acts are unforgivable. This is clearly criminal conduct.

At the Museum Barberini in Potsdam, Germany, on October 23, climate change activists threw mashed potatoes at the painting Meules (Haystacks) by Claude Monet. Earlier, in London’s National Gallery on October 14, a separate group of activists doused Vincent van Gogh’s Sunflowers with a can of tomato soup.

Back in May 2022, Leonardo Da Vinci’s immortal Mona Lisa was attacked with a cake. And in July, two activists glued themselves to Sandro Botticelli’s Spring at the Galleria degli Uffizi in Florence.

In all these instances, the paintings escaped damage because they were covered with protective glass. Nonetheless, such actions are not acceptable. The police took the activists involved into custody on suspicion of violating various laws, including damage to property.

Should this be considered terrorism? Japan's Act on the Protection of Specially Designated Secrets defines "terrorist activities" to mean:

Activities intended to kill or injure people or destroy important facilities or other objects for the purpose of forcing a political or other principle or belief upon the State or other persons or causing fear or terror in society based on such principle or opinion.

Destructive behavior by climate activists undertaken with the intent of disseminating broadly their own ideological beliefs concerning environmental issues are unmistakeably terrorism.

Many of the destructive eco-terrorists are young people, and reportedly they have won some support on the internet.

Sympathetic conformity without sufficient thought inevitably leads to the next crime. Instead, we need to reject such barbarism in no uncertain terms.

These activists need to wake up to reality. Terrorism cannot become widely acceptable. If the activists continue, the end result must be that their ideology is marginalized by society.

If they truly are convinced of the justice and legitimacy of their beliefs, they should shun terror and fight their battle in the court of public opinion.