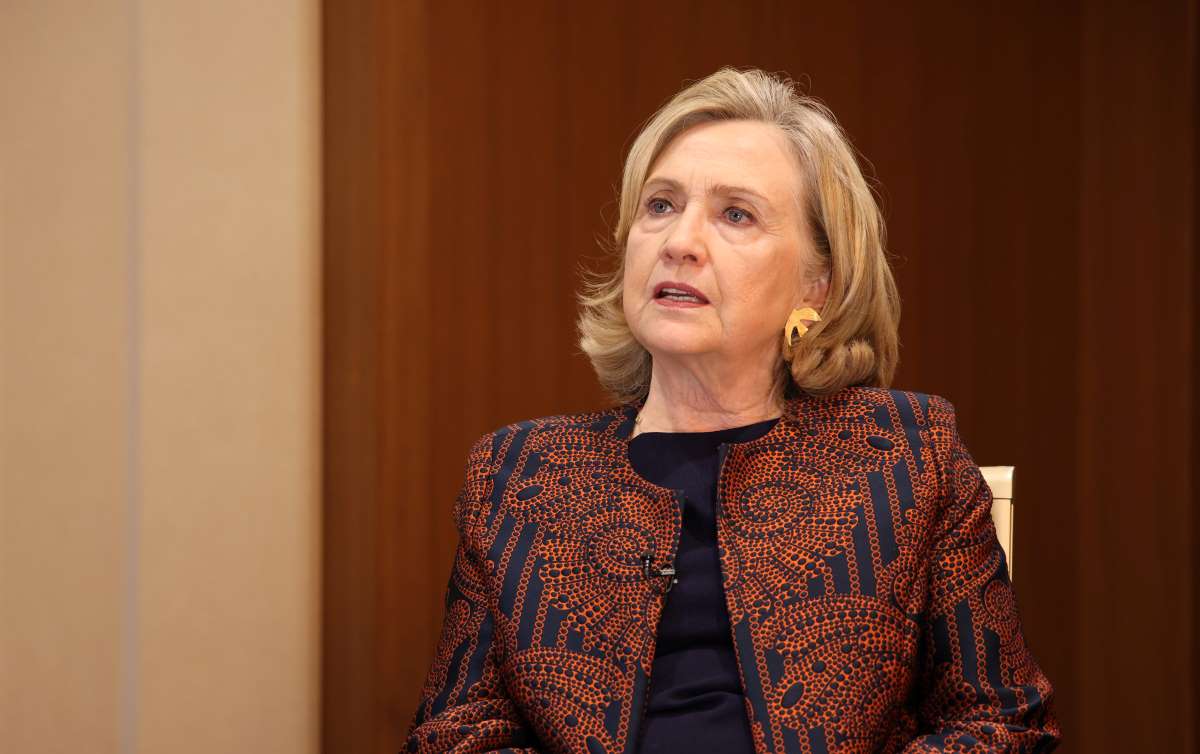 Much like the Nobel Prizes do in the Sciences, the Praemium Imperiale recognizes artists in the five disciplines of Painting, Sculpture, Architecture, Music, and Theater or Film.

In an October 20 interview with Fuji TV and The Sankei Shimbun, Secretary Clinton talks about the Praemium Imperiale, emphasizing the need to elevate the arts as a potent reminder of humanity's common values.

She also addresses protecting democracy in an increasingly unstable world, and the importance of unity in solving global problems — including climate change, the pandemic, and aggression from dictatorships. Running through the themes she discusses is a call for increased coordination between Japan and the United States to send China a clear message of solidarity.

I am so honored to be part of the process for the Praemium Imperiale. It is an extraordinarily important effort to recognize the arts and culture. And it's fair to say that it is like the Nobel Prizes for artists, and I was a little awestruck meeting some of them these [artists over the] last two days.

On the role of art

Art is always important. But it is especially important during difficult times, like what the world has been through with COVID. And now with all of the challenges with the war in Ukraine, with the aggressiveness by Russia, some of what is going on in China and other places.

The arts both help us to understand our common humanity and take us out of the moment to appreciate more universal and common values. And the artists who were chosen — painters, sculptors, and architects from Japan, who were so impressive. Film and composition. It was such a reminder that the arts are eternal.

And we have to do what we can to lift them up and share them. And that's really what the Praemium Imperiale tries to do.

On Russia's invasion of Ukraine

The response by the G7 countries, including Japan, has been exactly right. Some countries have been able to provide military equipment, and others have provided humanitarian assistance. All of them have sanctioned Russia and [President Vladimir] Putin and the people around him  because his unprovoked invasion of a neighboring country is not just about Ukraine. It's about the future of democracy in our world.

If a country in today's world ー in the 21st centuryー ー can invade a neighbor, as we saw with Russia invading Ukraine, that sends a very dangerous signal to other aggressive countries' leaders. So the G7 has been doing what it needed to do.

I'm aware that Japan will be hosting the G7 in the next meeting. I want to commend your government and the prime minister for supporting the people of Ukraine. And for understanding that even though Japan is a long way from Ukraine, what Russia is doing there has an impact on the future of democracy everywhere, including in Japan.

What can be done for Ukrainian citizens?

They need help in not only defending themselves, but in helping to support the millions of Ukrainian women and children who have left the country, as well as those who still remain. Russia is bombing hospitals, schools, daycare centers, and apartment buildings. These are not military targets. This is meant to inflict great suffering and pain on the Ukrainian people.

And as is so often the case, much of that burden falls on women and children. So even if they have left Ukraine to seek safety, they continue to need support. If they have remained inside Ukraine they need support. Individuals can go online and find groups providing food and shelter.

When I met with President [Volodymyr] Zelenskyy's wife Olena Zelenska she asked for hospital equipment for premature babies or pregnant women who are delivering. Just imagine all of the needs that a country has that has been unfairly and unprovokedly attacked. There is a lot that individual citizens can do.

How likely is a Russian nuclear strike?

I don't think they're close, but they like to threaten that. And it's important that we all stick together as we are to make it clear that, if Putin were to do that, it would have, as President [Joe] Biden has said, catastrophic consequences for Russia.

At this point, I don't think that will happen. But when you deal with a dictator, when you deal with someone who is a bully, as we have seen, it is important to make clear that there are consequences. For everything he is going to do he will be held accountable in some way.

So although I don't believe it's an immediate threat, we have to make it clear that if he thinks it has been hard because the world has been responding to support the Ukrainian people now, it will get much harder for him, for Russia, and the people around him.

On the role of the United States as a world leader

President Biden brought a very steady hand — the way that he has responded and worked with other nations. Not just in helping Ukraine and trying to hold Putin and Russia accountable, but bringing the United States back into the fight against climate change. The legislation that Congress passed and President Biden signed is the biggest financial commitment to fighting climate change that has been made. It's a very strong signal that under his presidency we take climate change seriously.

His outreach and our government's cooperation with Japan, South Korea, Australia, and India demonstrate clearly that we can have a Pacific alliance with democracies, with like-minded countries. And that sends a signal to China. That's especially important because of Taiwan.

We now have a steady, stable, experienced president. And that gives us a chance with the G7 meetings and other kinds of events to inject more stability into the international order. And to find more ways to work together, for common defense, for the fight against climate change, and to get prepared for the next pandemic. Because we should have learned a lot of lessons from this last one — all of us.

To work together to support poor countries and deal with climate change and the pandemic. I think we're on the right track. I just hope we will continue that.

I believe that the relationship between our two countries is very strong. But we need to have more coordination when it comes to military defense. And particularly, as you say, to send a message to both Russia and China through military exercises and the joint production of military hardware and equipment, that Japan and the United States are united and the US stands with and behind Japan.

It's also important that we strengthen our Pacific alliances, so that Australia, South Korea, Japan, the United States, and even India, are involved in planning for aggression by Russia and China in the Pacific.

I personally believe that the US and Japan should also be conducting military exercises to send a very strong signal to both Russia and China that the United States and Japan stand together and they will stand against any aggressiveness by either of those countries.

On China's military pressure on Taiwan

I'm very concerned about the much more aggressive rhetoric by the Chinese against Taiwan. I know how dependent Japan is on the Taiwan Strait for the delivery of everything from energy to other important materials. And again, the US, Japan, and other Asia-Pacific countries need to recognize that we have to support Taiwan. And there are a lot of ways of doing that.

We have to increase the capability of their military. We have to provide more advanced equipment and weaponry. But we also have to send a signal to China that disrupting the flow of maritime traffic, invading Taiwan, and undermining their democracy will have consequences.

I don't think it's smart to talk too much about what would be done, but again, this is an area that is very important for Japan and the United States to plan together, to coordinate together, to be ready together. To respond or try to prevent aggressive action by China against Taiwan.

On the upcoming US midterm elections

Having said that, the Democrats are working very hard to maintain our majority in both the Senate and the House. Because many of the candidates running on the Republican side are very extreme. They don't have very sensible proposals. They're quite, in my view, disconnected from the reality that we face in the world. So I'm doing what I can, and everyone else is, to try to elect Democrats. We'll see what happens on November 8.

No. I'm going to be supporting people that I believe in, that I think will do a good job, but I'm not going to run.

At this point President Biden intends to run again. If he does, he'll have my support.

(Find the related reports in Japanese here and here.)

Interview by: Fuji TV and The Sankei Shimbun