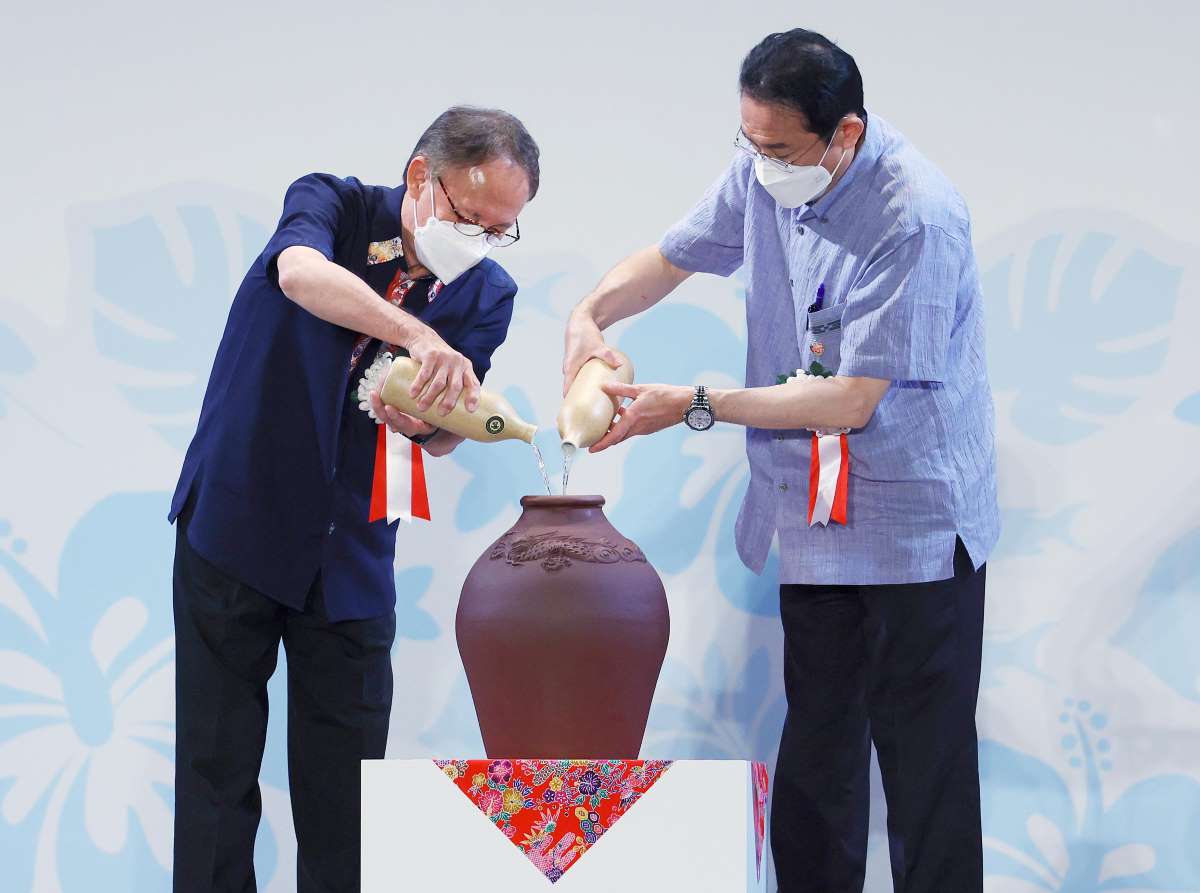 Prime Minister Fumio Kishida and Governor Denny Tamaki holding aged sake and pouring it into the same vessel in the sake ceremony marking the 50th anniversary of Okinawa's return. Ginowan City, Okinawa Prefecture on Sunday May 15, 2022. (Photo by Yasushi Notomi)

May 15 marked the 50th anniversary of Okinawa’s reversion to Japan in 1972.

RELATED: The Emperor and Okinawa: 50th Anniversary of the Reversion

While they had been under foreign rule, our people and lands were returned without a single shot fired. The significance of this can be seen in the context of the Russian invasion of Ukraine today. The whole nation should reflect on the joy of Okinawa’s return. At the same time we should examine the issues that remain today.

Many soldiers and civilians died in the Battle of Okinawa. After the war ended, the return of the United States-occupied Okinawa was not easy. There was a time when the US wanted to keep Okinawa as a United Nations trusteeship territory.

Even after the San Francisco Peace Treaty went into effect in 1952 and Japan regained sovereignty over its other islands, Okinawa was separated from the mainland and placed under United States rule.

Although Japan’s residual sovereignty over Okinawa was recognized, an article was included in the San Francisco Peace Treaty that allowed the United States to turn Okinawa into a trust territory at any time if it wished.

What prevented the invocation of this article was the passionate desire of the Okinawans to rejoin their homeland.

Before the conclusion of the Treaty of San Francisco in September 1951, 230,000 signatures were delivered from Okinawa to the Prime Minister’s Office, demanding the return of Okinawa to the mainland. Then-Prime Minister Shigeru Yoshida, in his speech accepting the peace treaty on behalf of Japan, specifically referred to the islands, telling the world, “I cannot but hope that the administration of these islands will be put back into Japanese hands in the not distant future.”

In Okinawa, the movement toward the reversion to Japan began in earnest. The movement to raise the national rising-sun flag spread throughout the prefecture, led by local school teachers. In 1960, the nonpartisan Council for the Reintegration of the Homeland was formed, and an island-wide movement was launched.

The Japanese government, too, worked in earnest on the effort.

Prime Minister Eisaku Sato, who visited Okinawa for the first time in 1965, said, “The postwar period will not end for Japan until Okinawa is returned to our country.” He went on to negotiate with the United States.

In 1969, an agreement was reached with US President Richard Nixon, which resulted in the return of the land in 1972.

Room for More Help and Improvement

We should also mention that the reversion movement has been transformed since about 1965. In 1968, a policy of “immediate and unconditional return” of the US military bases to Okinawa was formulated at the initiative of the progressive faction. This group was at odds with the conservative faction taking a more pragmatic line.

Disagreements over US military base issues still exist among the people of Okinawa. However, regardless of the remaining differences, Okinawa has made great strides since its reversion.

According to a poll of Okinawa residents conducted by Kyodo News between March and April 2022, 94% of respondents said they thought the islands’ reversion to Japan was “good.” These numbers powerfully illustrate the significance of the return.

There are unresolved issues. Per capita income is among the lowest in Japan, and building a self-sustaining economy is a long way off. Prefecture residents bear the heavy burden of noise pollution from US military bases and incidents involving US soldiers.

The Japanese and American governments have repeatedly contended that elimination of the danger of Futenma Air Station, which is surrounded by the urban area of Ginowan City, is key. Relocation of the US air station to Henoko in Nago City is the only solution. But the relocation has been delayed due to opposition from the prefectural government.

Okinawa Governor Denny Tamaki repeated his call for “abandonment of the construction of the new Henoko base” in a new petition to the Japanese and United States governments. He expressed concern about the US military bases, saying that “strengthening deterrence will instead increase tensions in the region.”

But now, 50 years after Okinawa’s reversion to Japan, China is expanding its military power next to Okinawa and trying to seize the Senkaku Islands (Ishigaki City), which are part of Okinawa Prefecture. We must recognize that Okinawa today is the front line of national defense.

Ukraine was invaded because Russia assessed it to lack adequate defenses. China’s ambitions for the Senkaku Islands will not grow less by having Japan and the United States weaken their defense measures in Okinawa. Instead, China will see any softening as an opportunity and take it.

The Self-Defense Forces and the US military are deterrents that preserve the peace. Reducing the burden of bases must be compatible with efforts to ensure the security of all of Japan, including Okinawa. Tamaki and the prefecture should withdraw their anti-base positions and allow the relocation of the Futenma base.

The 50th anniversary of the reversion of Okinawa to Japan was commemorated on Sunday, May 15, in Okinawa and Tokyo. The Emperor of Japan spoke to the people via live videolink. Prime Minister Fumio Kishida and Governor Tamaki both attended the anniversary ceremony in Okinawa.

The ceremony is a new step toward the next 50 years. Rather than 50 years of confrontation and confusion, let those be 50 years of cooperation and development.