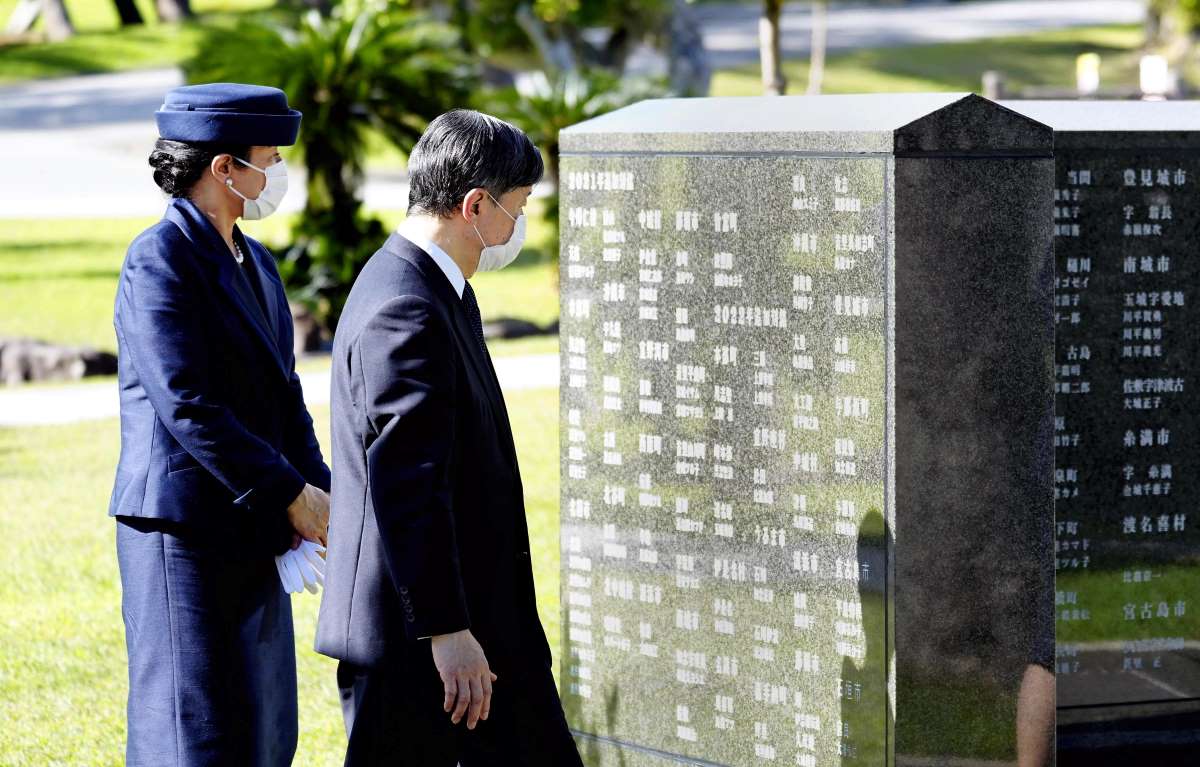 Their Majesties the Emperor and Empress of Japan look at the "Cornerstone of Peace" carved with the names of the war dead at the Peace Memorial Park in Itoman City, Okinawa Prefecture, on October 22. (Pool photo)

Theirs was a visit that reinforced our appreciation of the important place the Imperial House continues to hold in the hearts of the Japanese people. Emperor Naruhito and Empress Masako have just visited Japan's southernmost prefecture of Okinawa. It was their first time to travel to the islands since the Emperor's ascension to the throne.

Among their activities in the prefecture, the imperial couple attended the 37th National Okinawa Culture Festival-Okinawa 2022 on October 23. And on the same day they observed the grand opening ceremony of the National Disabled People's Arts and Cultural Festival.

A day earlier, the Emperor and Empress had visited the Peace Memorial Park in Itoman City, where they prayed for the many war dead buried there. The Mabuni area where the park is located saw some of the fiercest fighting of the Pacific War during the last days of the Battle of Okinawa.

Okinawa's Lesson: 'The Importance of Peace'

Reflecting on the tragedy that same evening, Emperor Naruhito said through an aide, "When I think about the tragedy of the Battle of Okinawa, and the gratitude for the peace we enjoy today, I am once again reminded of the importance of peace."

The Emperor's words are well worth remembering.

It has been 50 years since the reversion of Okinawa to Japan. The Emperor reportedly was especially eager to visit the prefecture this year to mark the anniversary. There is a legacy of Okinawa's history of hardships. That has resulted in people there having complicated feelings towards the Japanese mainland during the postwar era. The Imperial House has done much to assuage lingering resentments.

Emperor Emeritus Akihito and Empress Emeritus Michiko visited Okinawa a total of 11 times. Their trips began during the period when Akihito was crown prince, which endeared them to residents of Okinawa. The current Emperor and Empress are carrying on that tradition.

After hearing Emperor Naruhito's remarks at the Peace Memorial Park, a bereaved family member of one of the war dead said: "He has poured out his heart to Okinawa."

Many residents of the prefecture were eager to show their respect and affection for the Imperial House. People lined the roads the imperial couple traveled and waving small rising sun flags.

Whenever the limousine carrying the Emperor and Empress would slow down, it drew cheers from the crowd. There was even a welcoming parade in Naha City.

Okinawa Governor Danny Tamaki extended a warm welcome to the imperial couple on behalf of residents in the prefecture. Public opinion in Okinawa has been sharply divided on issues such as the hosting of United States military facilities. For that reason, the imperial institution is serving as a powerful force for reconciliation.

This was the first local visit involving an overnight stay for the Emperor and Empress in three years.

During a press conference immediately after his enthronement in October 2019, Emperor Naruhito had expressed his wishes. He said that he wanted to interact with as many Japanese as possible since such meetings afforded him with the opportunity to hear from his subjects directly. However, the COVID-19 pandemic unfortunately delayed those plans.

Now there are signs that the spread of the virus is finally coming to an end. It seems an environment in which the Emperor can fulfill his wish might finally be in place.

He had in fact resumed visits to local areas before going to Okinawa. On October 1 he made a day trip to Tochigi Prefecture to attend the National Athletic Festival. We can now expect to see an increase in the number of venues where the imperial couple takes part in activities.

It is a cause for joy that visits by the imperial couple serving to strengthen their ties with the Japanese people are finally in full swing again.