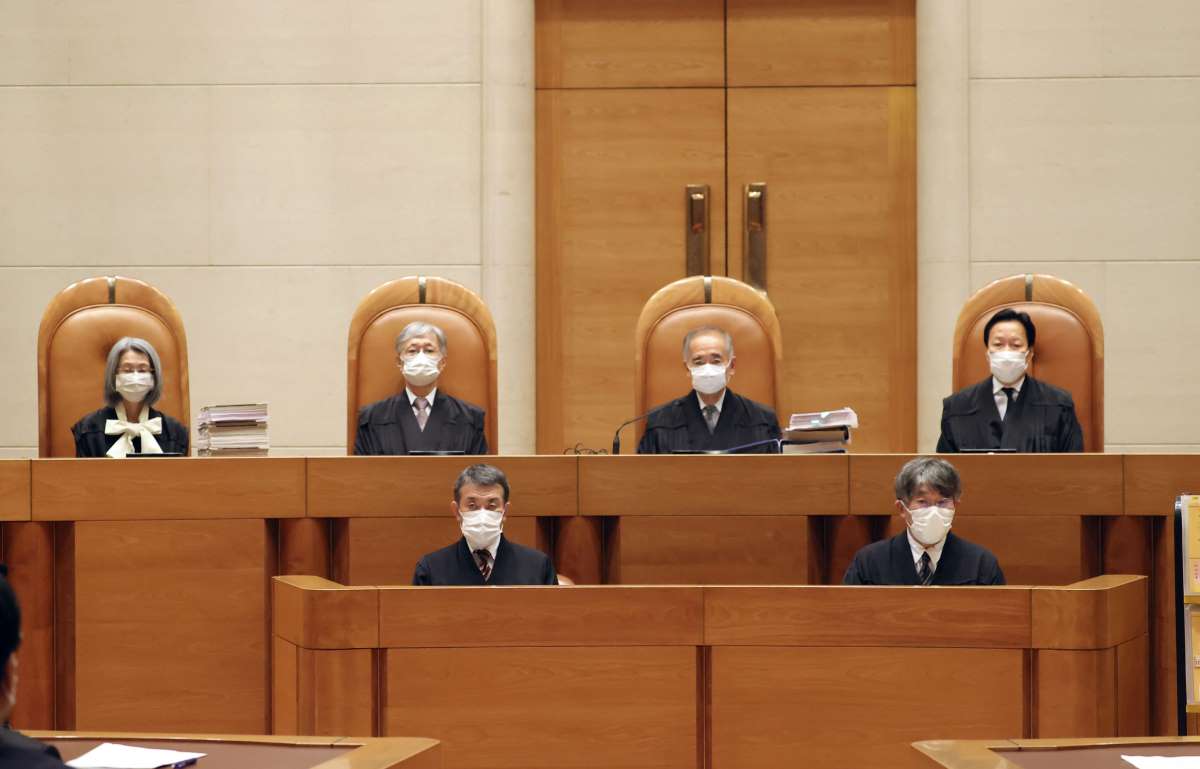 The second petty court of the Supreme Court' of Japan, which heard the appeals in four cases brought by residents evacuated due to the Fukushima nuclear accident, handed down its decision in the cases seeking compensation from the government on June 17, 2022. (Pool photo)

On June 17 the Supreme Court’s Second Petty Branch declared that the Japanese government is not responsible for damage suffered by evacuees following the 2011 disaster at the Fukushima Daiichi nuclear power plant. The ruling came in response to four class action compensation lawsuits brought against the government and the Tokyo Electric Power Company (TEPCO).

The four lawsuits in question were initiated in Fukushima, Gunma, Chiba, and Ehime prefectures, respectively. Of the earlier second-instance trials in the four cases, three had been decided in favor of the plaintiffs, while only the Tokyo High Court in the Gunma lawsuit ruled that the government does not have responsibility.

Before the four cases, 23 lower court decisions had basically split evenly on the issue of government responsibility, with 12 courts ruling that the government does have responsibility and 11 that it does not. Those results only served to cause further confusion. Hopefully, the Supreme Court’s decision will facilitate the deliberations in the cases that remain pending.

The Supreme Court trial focused on the following two questions: Was the government able to foresee the possibility of a mammoth earthquake hitting the Fukushima Daiichi power plant? And could the government have taken preventive measures?

In other words, the court had to consider whether the government had appropriately exercised its regulatory authority over TEPCO.

Among the points considered was how reliable the long-term assessment that the government’s Center for Earthquake Research Promotion issued in 2002. That report estimated that there was a 20% chance within the following 30 years of a magnitude 8-level earthquake occurring offshore in the area from the northern part of the Sanriku region on the northeastern side of Honshu to the Boso Peninsula near Tokyo.

The Supreme Court accepted the government’s contention that, because the actual size of the 2011 earthquake greatly exceeded the projection in the report, even if the government had ordered TEPCO to take further tsunami countermeasures, it would not have prevented the massive flooding of the reactors that took place at Fukushima Daiichi.

Although it won the case and does not have to pay compensation, the government would be sorely mistaken to simply breathe a sigh of relief.

The first thing to remember is that nuclear power generation is a national policy priority, although operations are privately managed. And it remains a major component in the energy sector. After all, the disaster was caused when a mammoth tsunami destroyed the nuclear power plant, triggering the release of radiation that contaminated a large area and forced so many people to evacuate.

People will now be seriously thinking about whether or not the Supreme Court ruling on lawsuits addressing things like government responsibility for paying compensation was markedly unreasonable.

And even if it was not obviously unreasonable, that does not mean that it can be fully endorsed.

The suffering caused by the Fukushima disaster continues even today. But, for Japan as a resource-poor island nation, nuclear energy remains a key energy resource indispensable to its energy security.

The national government should respond to the Supreme Court decision with humility and carefully explain to the nation why nuclear power is essential in order to increase understanding.

It must also realize that the government still bears great responsibility in ensuring the safe operation of nuclear power facilities.