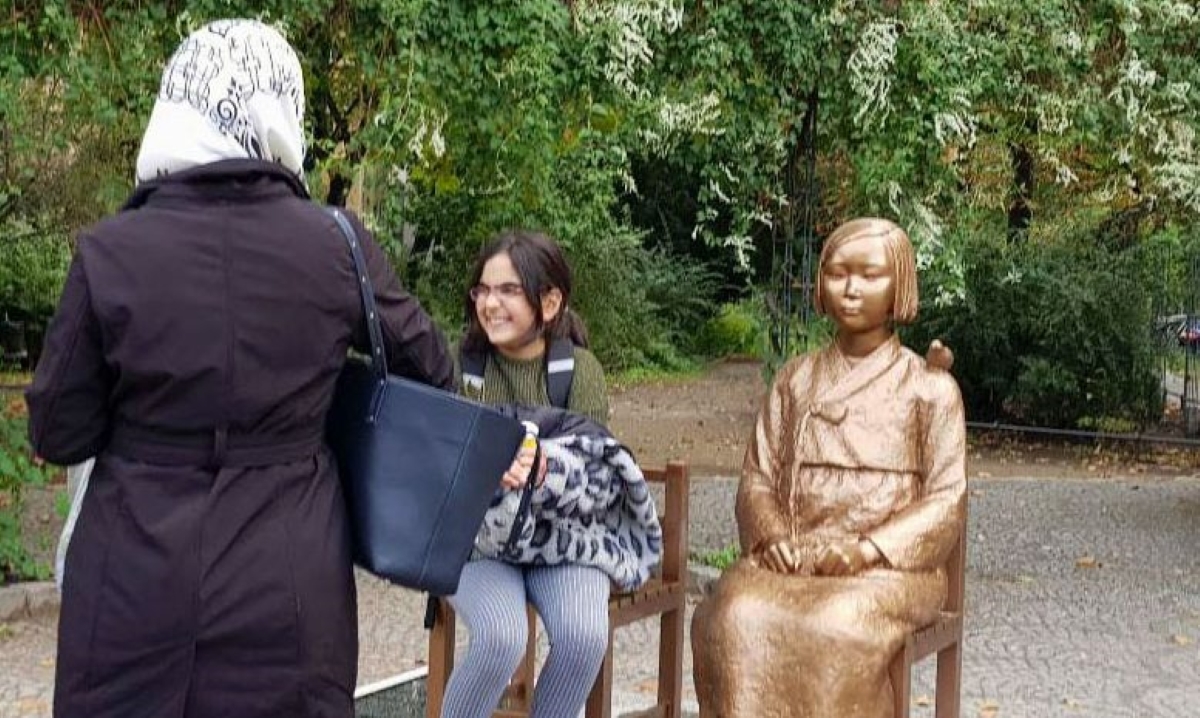 A comfort woman statue in Berlin with a false description of history on its base obstructs international relations. (Pool, via Kyodo.)

Early in June, JAPAN Forward received an email from a South Korean civic group calling itself “End Comfort Women Fraud.” The message said that the group would be visiting Germany to demand the removal of the comfort women statue installed there.

South Korea has already installed comfort women statues all over the world in its name. Yet, this South Korean civic group was planning to travel all the way to Berlin, the capital of Germany, to seek the removal of the comfort women statue there. After an interval of initial disbelief subsided, we immediately decided to hear the group’s story.

We managed to reach all four members of the group, who are scheduled to visit Germany, while they were in Seoul. They are Lee Woo-yeon, Kim Byungheon, Joo Oksoon, the head of the civic group, and an interpreter.

Joo, who is also the executive director of the YouTube channel South Korea’s Mothers Broadcasting Station, called on South Korean researchers on the comfort women issue and officially launched the group in January this year.

Lee, a co-member of the group, is a co-author of the bestseller Anti-Japanese Tribalism and a research committee member of the Naksungdae Institute of Economic Research. He has also contributed articles to JAPAN Forward in the past. Kim Byungheon is the author of Akai Suiyobi 30 Nenkan no Ianfu Waikyoku (literally, “Red Wednesday: 30 Years of Comfort Women Distortion”) and director of the Korean History Textbook Research Institute.

In a previous article, we reported that the group would visit Germany on June 25. They plan to submit statements to the Mitte City Council in Berlin, in the district where the statue is located, organize street demonstrations, and arrange a meeting with the local Korean civic group that campaigned to erect the statue there.

Responses to our article came in swiftly, with some saying that they hope the group will visit the United States as well. Others shared that they had started a fund-raising campaign to support the group.

The South Korean group says that conjecture about “comfort women hunts” and “sexual slavery” by the Japanese military are false. These lies, it argues, are the root cause of the deterioration of not only Japan-South Korea relations but also broader international relations.

It claims that these lies, which have spread globally, only incite antagonism and hatred. Healthy international relations can only be established, they say, if Korean researchers correct those lies one by one.

Meanwhile, one of the most-read trending articles on JAPAN Forward in the week of June 11 was “[Bookmark] Unifying Taiwan Begins with the Senkakus,” written by Chinese human rights activist Jennifer Zeng. She previously worked for the Development Research Center of the State Council, which is China’s policy advisory body. Now she reports on China’s internal affairs from the United States.

In the article, she lays bare the antagonism and hatred incited by such lies. By perpetuating anti-Japanese education, the Chinese Communist Party (CCP) has imbued its people with hatred toward Japan, fostering a form of nationalism that views Japan as an enemy. Chillingly, this hatred of Japan has even been used as grounds to justify launching a military attack on Japan to “flood Tokyo with blood.”

This is not unlike what is happening in Ukraine. Russia’s Putin administration has called Ukraine a “Nazi state” and fueled the public’s hatred against its neighbor. In reality, the invasion that is being spun by the Kremlin as a “defensive war” has been nothing but an accumulation of stomach-turning war crimes by Moscow.

Zeng predicts in her article that, in the event of a crisis, Beijing would similarly appeal to patriotic sentiment to mobilize civilian ships for war. She concludes that Beijing has good reason to believe that the best choice to “unify” Taiwan would be to frame the war as “fighting against Japanese neo-militarism,” because Taiwan, like China, would also like to claim the Senkaku Islands in Ishigaki, Okinawa Prefecture.

The same issue also provides the backdrop to Prime Minister Fumio Kishida’s attendance at the G7 Summit in Germany over the weekend of June 26-28, followed by the NATO summit in Spain on June 29-30. Kishida will become the first Japanese prime minister ever to attend a NATO meeting.

What kind of message does Japan want to send to the world? And the comfort women statues, which have become symbols of antagonism and hatred that spread false history — will they ever be removed?

Watch for the next issue in two weeks.

JAPAN Forward will celebrate its 5th anniversary in June with new projects on the horizon! We thank you for your continued support. For inquiries, please call 0570-033-433 (Sankei iD).