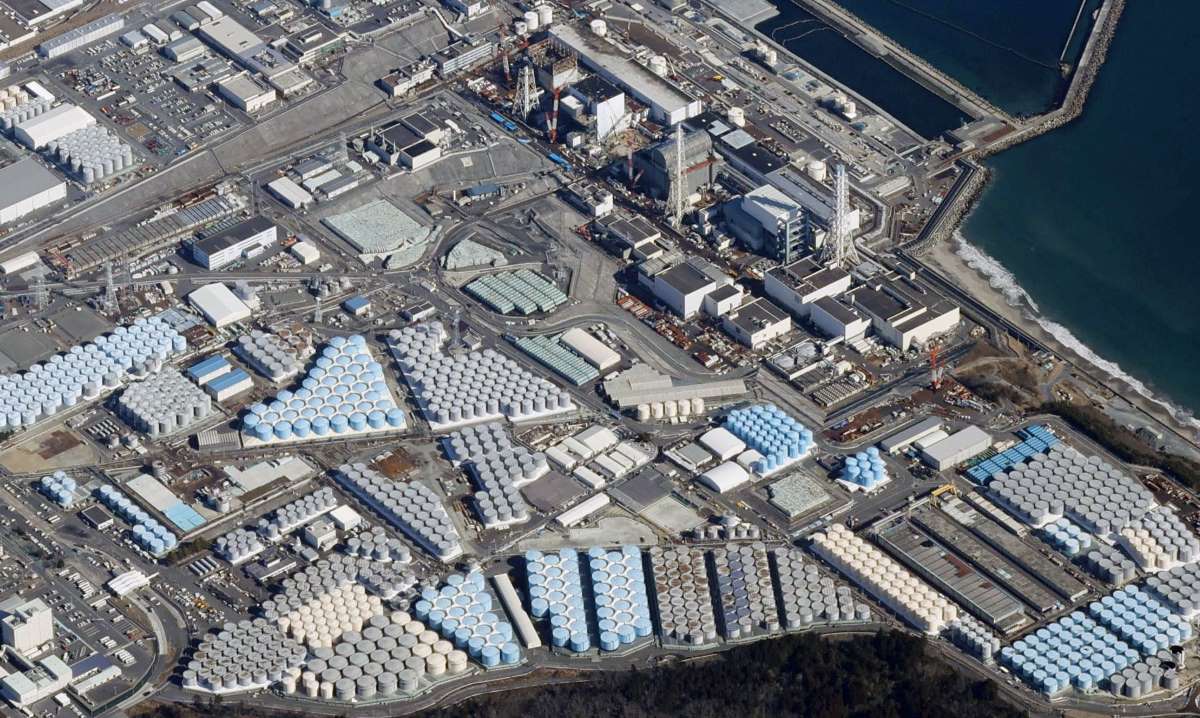 Storage tanks of treated water lined up on the premises of TEPCO's Fukushima Daiichi Nuclear Power Plant (bottom of picture) in February 2022. (Sankei)

The Tokyo Electric Power Company (TEPCO) plan for the release of treated water into the ocean from its stricken Fukushima Daiichi Nuclear Power Plant after it has been decontaminated has moved one step further towards implementation.

On May 18, the Japan Nuclear Regulatory Authority provisionally approved TEPCO’s treated water discharge plan. After a one-month period during which public comments will be solicited, the NRA is expected to give the plan its formal go-ahead. The Japanese government wants the discharge process to begin in spring 2023, and the NRA’s approval is consistent with that timeline.

A team from the International Atomic Energy Agency (IAEA) arrived in Japan in February to verify the safety of the wastewater discharge plan. Among the comments it published at the end of April was the following:

The measurements showed that the [radioactive] chemical substances [affecting people] were far below the Japanese regulatory limits set in the Water Pollution Control Law.

The TEPCO plan calls for a tunnel to be dug underwater to carry the treated water for one kilometer offshore. Only there will the highly diluted, treated water be discharged.

Even after most radioactive elements have been removed with the Advanced Liquid Processing System, the radioactive substance tritium remains. Currently there is no practical technology for separating tritium from water. Nonetheless, the plan calls for the amount of tritium in one liter of treated water that has been diluted with seawater to be only 1/40th the tritium concentration level (60,000 becquerels) allowable under Japan’s national effluent standards before it is discharged into the ocean.

In response to these efforts, other nations have been relaxing their restrictions on the import of Japanese food products that had been put in place following the earthquake-triggered Fukushima accident. The notable exceptions are China and South Korea.

Meanwhile, the moves made by Taiwan and the United Kingdom earlier in 2022 are positive signs for the discharge plan.

The water at issue is groundwater and rainwater that flowed into the damaged building where the reactor is located became radioactively contaminated. The quantity of water treated and purified from this source has continued to grow. As a result, there are now more than 1,000 large tanks full of treated water lined up on the premises of the Fukushima Daiichi Power Plant. However, space is fast running out.

There is no alternative to releasing the treated water into the sea. This also needs to be done before the decommissioning of the nuclear reactor can move forward, and is essential for the revival of Fukushima Prefecture.

Even so, deep-rooted opposition from fishing interests continues. We must remain on our guard against damage caused by unfounded rumors.

Rumors are shapeless phantoms that breed where science is shunned, which makes them difficult to counter. TEPCO, whose facility suffered the damage, cannot handle the problem on its own. Only the national government has the ability to solve the problem.

After the ocean discharge plan was approved, Toyoshi Fuketa, chairman of Japan’s regulatory authority, held a press conference in Tokyo. He told reporters that “it is scientifically and technically unthinkable that the ocean discharge could impact people’s health and marine products.”

“But since it is a matter of interest to many people, we very carefully examined the plan,” he added.

IAEA Director General Rafael Grossi also arrived in Japan on May 19 for an on-the-ground inspection at the Fukushima Daiichi Nuclear Power Plant.

Now we need Prime Minister Fumio Kishida to step up and put an end to the unsubstantiated rumors by clearly explaining the actual situation to the Japanese people. The Prime Minister needs to give his utmost effort in this regard.