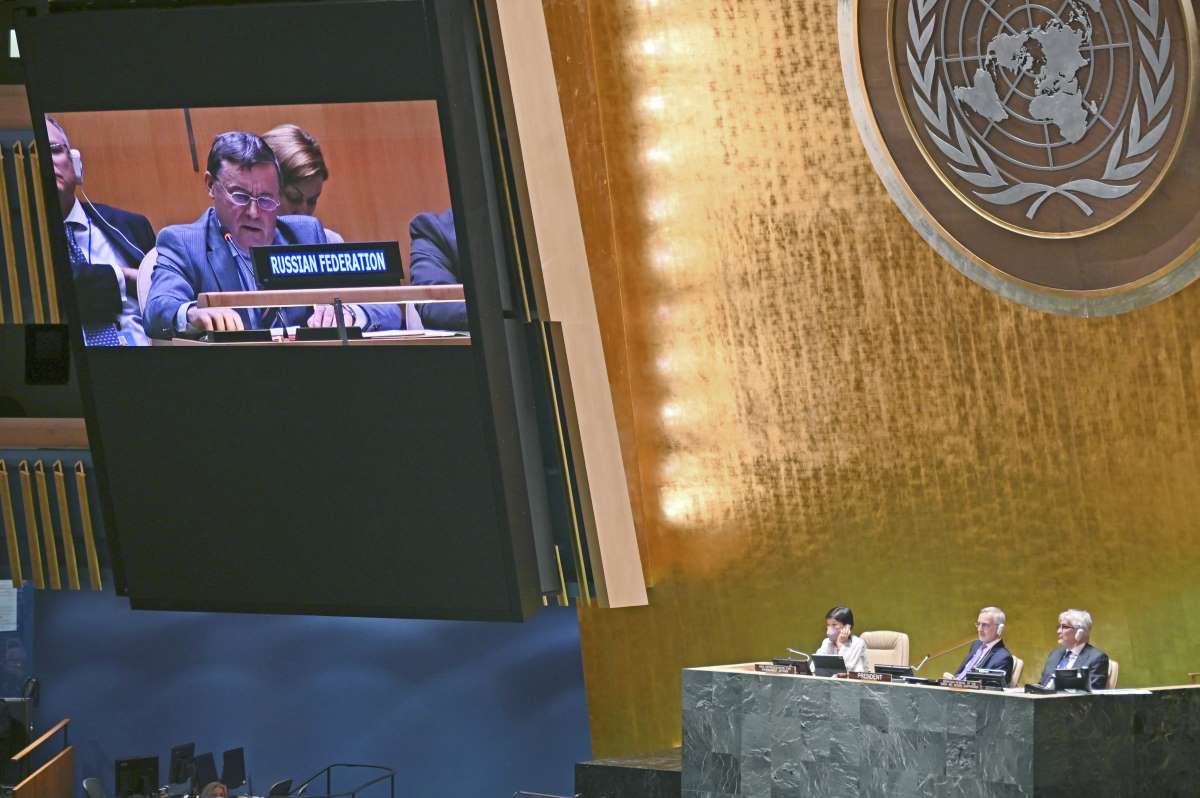 A screen showing the Russian representative speaking at the final day of the NPT Review Conference in New York on August 26, 2022. (Kyodo)

The Tenth Review Conference of the Parties to the Treaty on the Non-Proliferation of Nuclear Weapons (NPT) ended in failure at the United Nations Headquarters in New York City on August 26, when Russia refused to accept the final draft consensus report.

Russia, which is allowed to possess nuclear weapons under the NPT regime, is currently invading Ukraine and threatening the use of nuclear weapons against it. That stark reality, which has shaken the NPT regime to its core, has once again been made clear by the collapse of the disarmament meeting.

The final draft, which was torpedoed by Moscow despite being supported by all other parties, explicitly stated that it was vital that the Ukrainian authorities should control the Zaporizhzhia nuclear power plant currently occupied by the Russian military.

Ukraine gave up all nuclear weapons that were within its borders following the dissolution of the Soviet Union. In return, the country received security assurances contained in the Budapest Memorandum of 1994, signed by the United States, the United Kingdom, and Russia, all of which are nuclear powers.

Despite its international pledges, Russia went ahead and invaded Ukraine anyhow, and has gone so far as to intimidate it with the threat of using nuclear weapons.

Russia expressed vehement opposition to the final draft report at the NPT meeting. Since the conference is conducted in accordance with the principle of consensus, Moscow’s opposition doomed the acceptance of the report.


A Mockery of the Non-Proliferation Treaty

The NPT recognizes the right of countries that do not possess nuclear weapons to use nuclear energy for peaceful purposes. The occupation of the Zaporizhzhia nuclear power plant by the Russian military makes a mockery of the treaty. Russia must immediately remove its troops from all Ukrainian territory, including the Zaporizhzhia power plant.

Russia was not the only nation out to frustrate progress at the review conference. China too created its own opportunistic problems. For example, it demanded that a provision be dropped from the final report that had called for a moratorium on the production of fissile materials (FM), such as enriched uranium and plutonium that could be used in the production of nuclear weapons.

Among the five nations allowed to possess nuclear weapons under the NPT — namely the United States, Russia, the United Kingdom, France, and China — only China has not announced a moratorium on the production of FM. We must conclude that Beijing harbors the intent to expand its nuclear forces.

This year’s NPT review conference fell apart, just like the last one in 2015. Securing constructive nuclear force reduction is obviously no easy task. And there is no prospect for reform of the NPT regime.

Some countries which are dissatisfied with the NPT are looking instead for progress towards a Nuclear Weapons Convention that would ban the production and deployment of nuclear weapons. However, all five nuclear powers have rejected this approach. It is not a viable substitute to achieve progress towards nuclear disarmament.

Even while Tokyo laments the collapse of the NPT review conference, Japan is being directly threatened by the nuclear weapons of China, Russia, and North Korea.

It is Prime Minister Fumio Kishida’s responsibility to ensure there is effective deterrence in place to protect the nation of Japan and its people against nuclear attacks. In that regard, close cooperation with its ally the United States, which provides Japan’s nuclear umbrella, is essential.