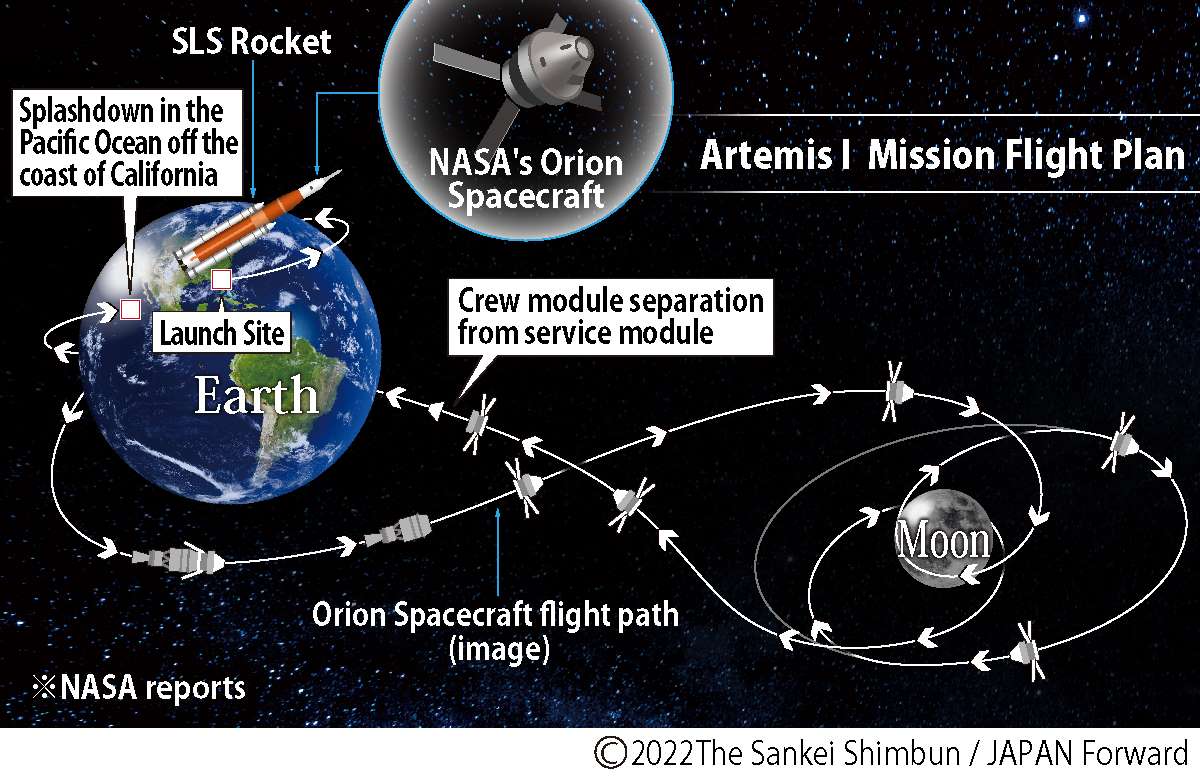 The Artemis I plan for the Orion spacecraft's mission.

The challenge of sending mankind to the moon is restarting. The United States’ National Aeronautics and Space Administration (NASA) is conducting an unmanned test flight of the new spacecraft Orion, which ultimately will be used for manned lunar landings.

Following Artemis I’s second schedule change, the space probe schedule is currently under review. Updates will be posted here, and NASA’s announcements can be checked here. The original launch date of August 29 was delayed for the resolution of technical issues, and the follow-up September 3 schedule was scrubbed to allow resolution of a fuel leak.

This will be the first step of the Artemis space program, which aims for manned exploration of the moon and Mars. It has been a half century since the Apollo 17 landing in 1972, the last time humans were on the lunar surface.

Can humans live on the moon? NASA’s fateful test flight is attracting attention.

Testing the Performance of Spacecrafts

The Artemis Program is an international project led by the United States, with Japan also participating. It aims to build a lunar base as well as a space station orbiting the moon. Named “Gateway,” the lunar base could be used as a foothold for manned exploration of Mars.

In order to bring the Artemis program to realization, NASA has been developing “Orion,” the first manned spacecraft since the space shuttle was retired in 2011, and the super-giant rocket “SLS,” which will be used for its launch. This mission, “Artemis I,” is a test flight to confirm the performance of each part.

Orion will launch unmanned from the Kennedy Space Center in Florida, United States, and then head to the moon while making adjustments to its orbit.

The unmanned spacecraft will orbit the moon twice and then return to Earth without landing on the lunar surface. When it returns, it will reenter the atmosphere at a speed of about 40,000 kilometers per hour, endure temperatures as high as 2,760 degrees Celsius, and splashdown in the Pacific Ocean off the coast of California.

The flight period will last about four to six weeks. Orion will travel the furthest distance of any spacecraft developed by mankind.

The SLS rocket that sends Orion to the moon is a two-tiered launch vehicle with length 98.3 meters and weight 2,603 tons (including fuel). With a maximum thrust of about 4,000 tons, it is the most powerful rocket in history, surpassing that of the Saturn V, which carried astronauts to the moon in the Apollo program.

Orion, which was installed near the top of the SLS, was developed at a cost of $9.3 billion USD (approximately ￥1.2 trillion JPY). It consists of a crew module for astronauts and a service module that supplies power, thrust, water and air.

The crew module has a conical shape with a height of 3.4 meters and a diameter of 5 meters, and is similar to that of the Apollo spacecraft. It can carry four people, and has a life-support system, training equipment, a heat shield, and other instruments, allowing astronauts to live for up to 21 days.

Meanwhile, the service module has been developed by the European Space Agency (ESA). In addition to 33 large and small engines, it also has backups in case of the failure of the main engine or other emergencies. The service module detaches prior to reentry into the atmosphere, and just the crew module returns.

This flight is unmanned, but three mannequin dolls will “board” the spacecraft. The moon is about 400,000 kilometers away from Earth, and it is necessary to study in detail the effects of the deep space environment on the human body in preparation for future manned flights.

The biggest health risk is exposure to cosmic radiation. Cosmic rays are mostly blocked by the Earth’s atmosphere and magnetic field, and therefore they don’t reach the ground. However, the radiation risk at the International Space Station (ISS), which has an altitude of about 400 kilometers, is 250 times that at the Earth’s surface. It is estimated that in the interplanetary medium, away from the Earth’s magnetic field, the exposure will be up to 700 times.

Sitting in the commander’s seat of Orion is the captain, “Moonikin Campos.” Clothed in the orange spacesuit worn by the astronauts in the Artemis program, it is a mannequin that imitates a human male’s body. Radiation sensors are attached to the spacesuit.

In the passenger seats are “Zohar” and “Helga,” two female figures. They are made with plastic that mimics the density of bone, soft tissue and the lungs, and are equipped with more than 5,600 radiation sensors in radiation-sensitive areas, such as the lungs and uterus. In general, female bodies are more vulnerable to radiation, and these experiments respond to the rise in female astronauts.

Only Zohar is wearing the newly-developed radiation-protection vest. The performance can be evaluated by comparing the dosage of exposure between the two bodies, leading to the development of technology to better protect the health of astronauts.

There are also experiments using small living organisms. Inside containers placed in the crew module, seed cultivation of plants, DNA repair in fungi, and gene expression of algae, among other experiments, are being researched. It is said that these findings will provide hints for future human life in deep space.

Manned exploration of the moon begins in earnest starting with Artemis I.

After landing on the moon, NASA plans to build Gateway to serve as a base for further exploration. It expects to begin full-scale lunar exploration, including searching for water, in the late 2020s. NASA Secretary Bill Nelson has indicated that he intends to achieve manned Mars exploration by 2040.

Japan plans to be in charge of the building of Gateway and the development of lunar rovers, and it is expected that Japanese astronauts will have the opportunity to land on the lunar surface by the second half of the 2020s. Currently, selective examinations for the next generation of astronauts responsible for lunar exploration are underway.

JAXA professor emeritus Yasunori Matogawa (80), who is familiar with the history of space development, said, “This unmanned test flight is the first step toward a manned mission. NASA’s technology to operate exploration probes has advanced remarkably since the era of Apollo. Planning orbits is complex, but seeing whether the Orion spacecraft can be precisely controlled using the moon’s gravity and other forces will be interesting.”