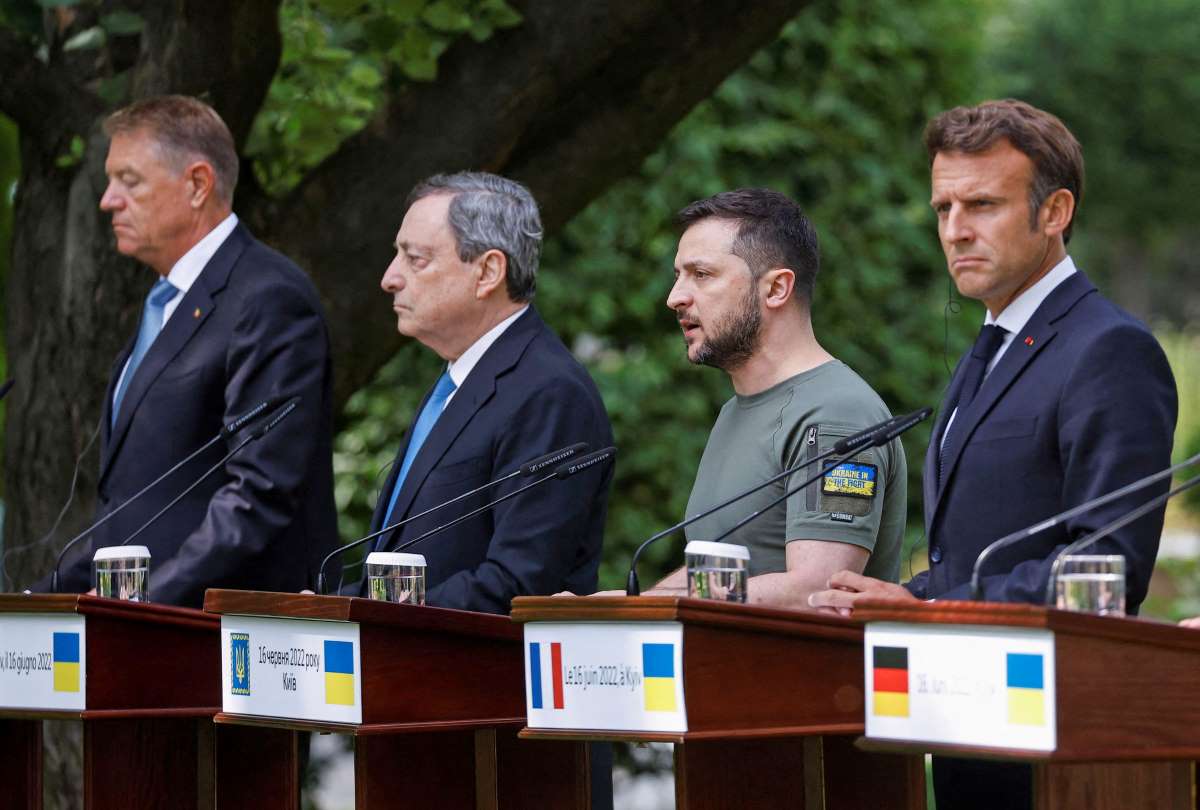 It is imperative that nations assisting Ukraine in its battle to stop the Russian invasion and war crimes, including G7 and European Union (EU) members, maintain solidarity in their support of the Ukrainian fight for independence.

Recently, the leaders of Germany, France, and Italy — all G7 members — as well as Romania visited Ukraine’s capital Kyiv, where they held talks with President Volodymyr Zelenskyy.

All four nations, which are EU members, vowed to support Ukraine’s candidacy for EU membership during their meeting with Zelenskyy. And they vowed to continue providing Ukraine with aid.

Following the four leaders’ trip, the European Commission, the EU’s executive arm, recommended Ukraine as a candidate for EU membership. An EU summit meeting will discuss the proposal on Friday and Saturday, June 24 and 25.

Speaking about the war to resist Russia’s aggression at a joint press conference following the meeting with Zelenskyy, French President Emmanuel Macron said that the EU would never demand that Ukraine make concessions to end the war. Following the visit, Macron declared that “Ukraine belongs to the European family,” and the EU will stand by Kyiv until it achieves victory.

When asked if Germany would continue to provide weapons to Ukraine, German Prime Minister Olaf Scholz told reporters, “We will continue to support Ukraine, including supplying weapons, for as long as it needs our help.”

These statements were appropriate in terms of thwarting Russia’s invasion. However, recent statements from the leaders of France, Germany, and Italy cast some doubt on their commitment to never allow “changes to the status quo by force.”

For example, Macron has stated, “We must not humiliate Russia, so that the day when fighting stops, we can build an exit ramp through diplomatic means.”

Scholz has adopted a cautious approach as far as expanding arms supplies to Ukraine. Meanwhile, he’s called on Russian President Vladimir Putin to accept a ceasefire, freezing the current situation in place.

Italian Prime Minister Mario Draghi, meanwhile, has presented a “peace proposal” to the United Nations that would “neutralize” Ukraine.

Reward Russia for its Aggression?

Russia has already occupied 20% of the sovereign territory of Ukraine, a country which is roughly 1.6 times the size of Japan. Meanwhile, the Ukraine government, even as it continues its desperate struggle to reclaim its national territory and population, has been adamant that the “total withdrawal of Russian military forces” is a precondition for a ceasefire.

The Ukrainian government reacted furiously to such indulgent statements and actions by the leaders of Germany, France, and Italy, which suggest that Russia should be allowed to keep the fruits of its unlawful aggression.

It’s fair to say that this criticism was what necessitated the trip to Kyiv by the leaders of the three countries in order to reaffirm their stance of supporting Ukraine.

More than 100 days have passed since Russia launched its invasion of Ukraine. If “assistance fatigue” leads to discord within the G7 and EU, that will inevitably give Putin momentum.

A G7 Summit is scheduled for the end of June in Germany. It is time for Japan to step up and do more to ensure continued support for Ukraine in its hour of need.