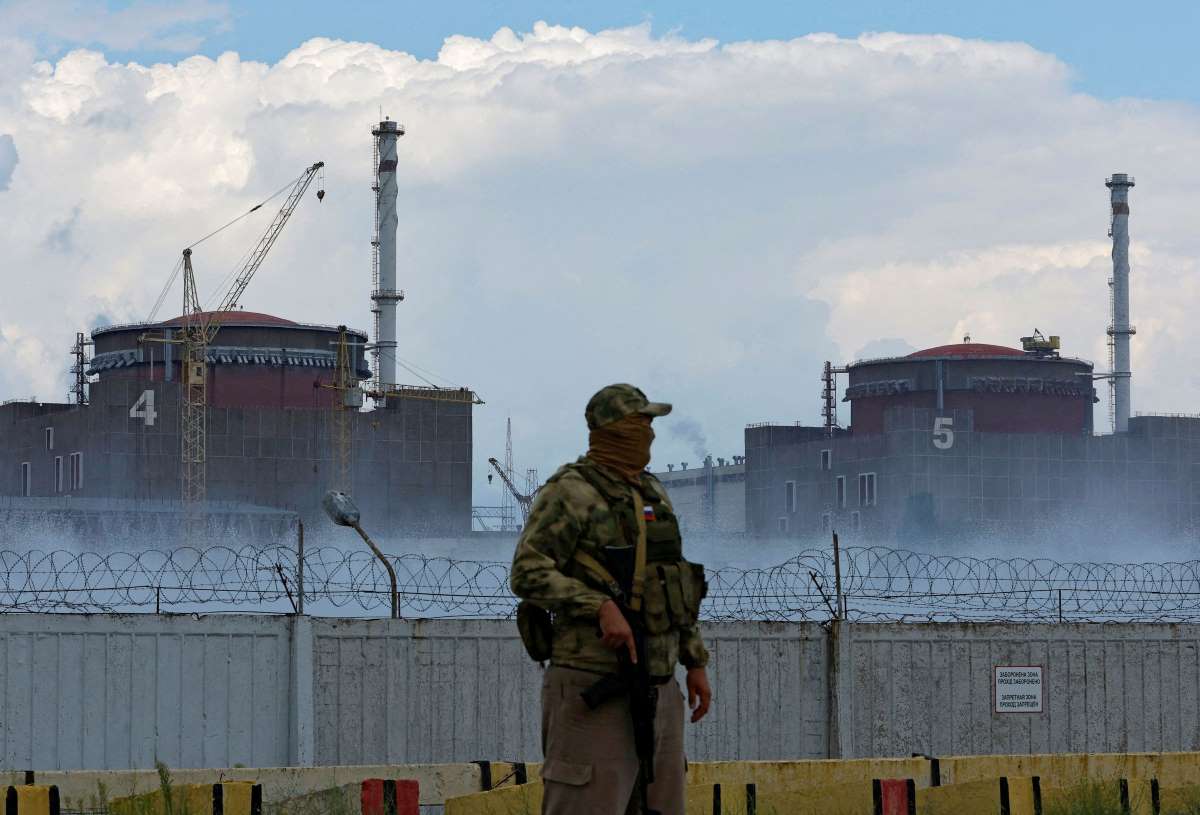 A serviceman with a Russian flag on his uniform stands guard near the Zaporizhzhia Nuclear Power Plant in the course of Ukraine-Russia conflict outside the Russian-controlled city of Enerhodar in the Zaporizhzhia region, Ukraine August 4, 2022. REUTERS/Alexander Ermochenko/File Photo

Russia is occupying the Zaporizhzhia nuclear power plant as a military base for attacking Ukraine. This is an outrageous act as the power plant is prone to a serious radioactive accident. The immediate evacuation of Russian troops should be demanded.

As fighting intensified from August 5, rockets have been fired at the Zaporizhzhia nuclear power plant in southern Ukraine, landing around the spent fuel storage facility and damaging radiation monitoring detectors. One reactor has also been forced to shut down.

If spent fuel and reactors were to be damaged, it would affect numerous countries. Has Russia learned nothing from its Chernobyl nuclear accident in Ukraine during the former Soviet era?

Russian troops, who began their invasion of Ukraine at the end of February this year, have occupied the Zaporizhzhia nuclear power plant since March 4, with a fire breaking out on the power plant premises as they broke in.


Echoes of Military Occupation of Chernobyl

The Russian military also occupied the decommissioned Chernobyl nuclear power plant for a time, but later withdrew. At the Zaporizhzhia nuclear power plant, Russian troops have reportedly brought many weapons with them into the premises and have been using it as a base for staging attacks.

This cunning and outrageous maneuver uses the nuclear power plant as a "nuclear shield" against the Ukrainian military's counterattack, even while Russia launches rockets and fires other weapons against them from the plant.

The Russian side has claimed that the Ukrainian military shelled the power plant, but is this really the case? One thing is clear: shelling would not have occurred without the Russian military’s occupation of the plant.

International Atomic Energy Agency (IAEA) Director General Rafael Mariano Grossi has expressed strong concern about the risk of a nuclear disaster, calling for access to the facility in his comments to the UN Security Council.

Adding to the danger is the ignorance of Russian soldiers. There is information that they dug up radioactive soil to build trenches and were exposed to radiation during their occupation of Chernobyl.

Article 56 of the Geneva Convention on Armed Conflict prohibits attacks on nuclear power plants. The Russian military, which entered the plant with tanks, has been in violation of the treaty since March 4.

Chances of a nuclear disaster are increasing by the minute as the Russian military amasses its forces toward southern Ukraine, where the Zaporizhzhia nuclear power plant is located.

Only the Russian president, Vladimir Putin, can avert a nuclear disaster.

(Read this editorial in Japanese at this link.)