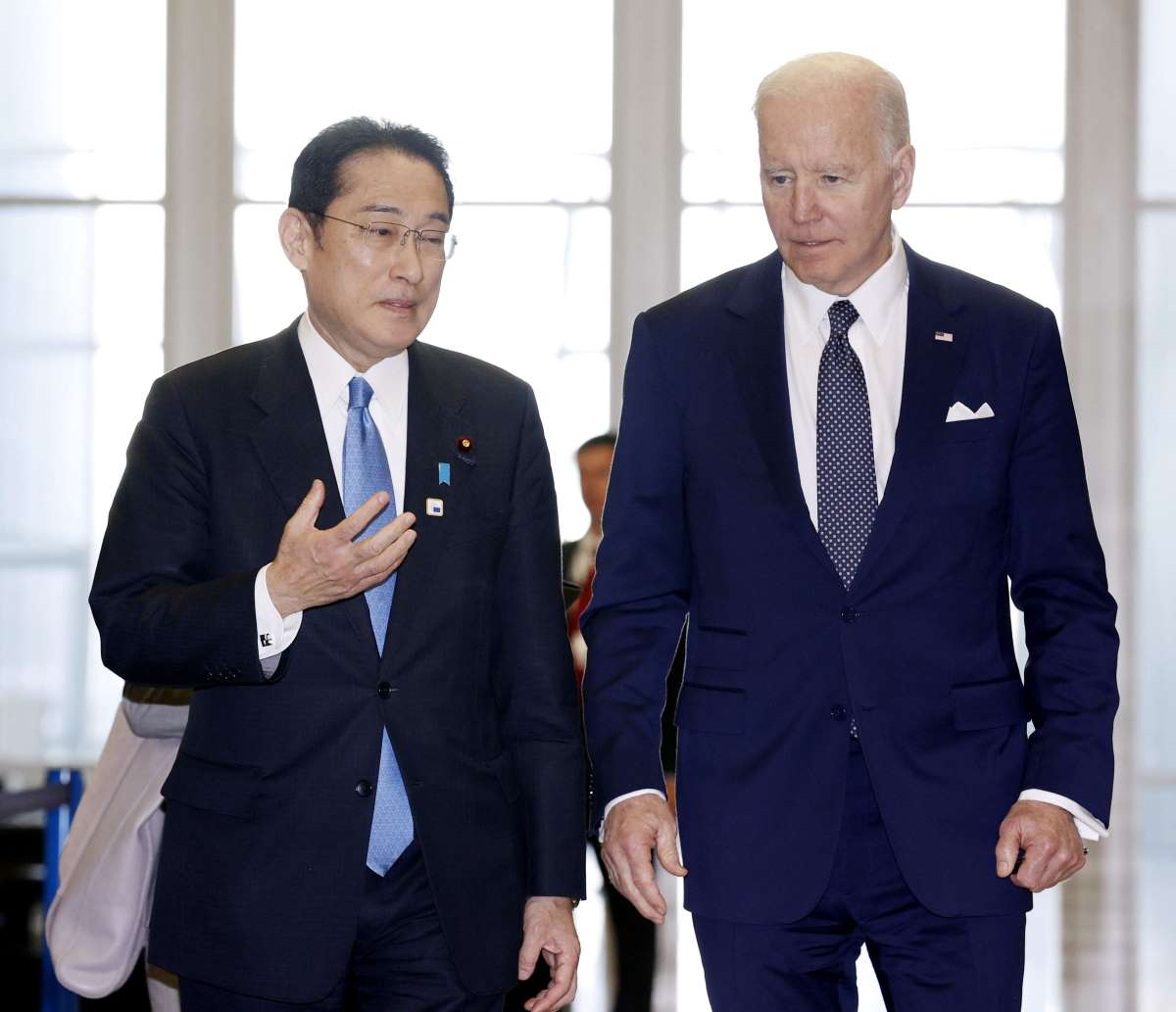 Japanese Prime Minister Fumio Kishida and US President Joe Biden at NATO headquarters in Brussels for a meeting on the Russia-Ukraine conflict on March 24, 2022.

The United States National Security advisor Jake Sullivan warned world leaders heading for emergency talks about the Ukraine crisis in Brussels that they should prepare to discuss “very weighty matters”.

This would include appraisals of the potential use of weapons of mass destruction by Russia, including nuclear weapons.

Although the minutes of the NATO meeting in Brussels were not released to the press, I believe that it was inevitable that this grim scenario was considered by national leaders who gathered for the summit. These included the heads of government of Britain and France, who have access to the launch codes for nuclear missiles.

Japan is not a member of NATO but Prime Minister Fumio Kishida attended the meeting as a guest. I have no doubt that he listened intently.

Following the talks, President Joe Biden was asked by a reporter if NATO "would respond" if Russian President Vladimir Putin uses chemical weapons in Ukraine. Mr. Biden replied that such an attack "would trigger a response in kind".

I do not know how Mr. Kishida felt when he heard this warning. Judging from his subsequent words and actions, I imagine he was shocked. He certainly seems more resolved than ever to persuade the US and Russia to cool the nuclear rhetoric.

Before he left Brussels, the prime minister gave a statement, in which he emphasized that nuclear, biological and chemical weapons should never be used. Then, immediately upon his return to Japan, Mr. Kishida accompanied the new US Ambassador Rahm Emanuel on a visit to Hiroshima, the first city ever to have suffered an atomic bomb attack.

Following a tour of the Peace Memorial Park and the museum, he gave a speech reminding his audience of the human devastation caused by nuclear weapons.

“The tragedy should never be repeated,” he said.

There has been an intense debate about the concept of a nuclear deterrent since former prime minister Shinzo Abe said in early March that Japan should consider a nuclear sharing approach involving American missiles.

While noting that the "three nonnuclear principles" of not possessing, manufacturing or permitting the introduction of nuclear weapons onto Japanese territory, Mr. Abe said: "It is only natural to discuss how to protect the independence of our people and Japan in this reality that we live in," according to the Nikkei.

The leader of Japan’s main opposition party gave his response to that idea at a webinar I attended recently. Kenta Izumi, who heads the Constitutional Democratic Party of Japan (CDU) said: “If Japan were to share nuclear weapons, its international credibility would be damaged and the impact on  a neighboring country would be enormous and the security environment in Asia will become ever more unstable.”

His words were primarily aimed at a US audience, as he was speaking at an event hosted by the Center for American Progress, a left-leaning think tank.

I interpret his comments as a warning. He implied that if Japan moves towards hosting US nuclear missiles, China or North Korea could be provoked into an aggressive military response. In a worst case scenario, they might even find justification to carry out a preemptive nuclear strike against Japan, with devastating consequences.

Some experts I have consulted have advised me not to spend too much time worrying about a nuclear-armed Japan, regarding it as a far-fetched idea. One person told me that Mr. Abe decided not to bring it up when he actually had the power to advance the idea as prime minister because he knew it would create far more security problems than it solves.

Other people have claimed that Mr. Abe’s reputation has been severely tarnished by the friendly nature of his relationship with Vladimir Putin when he was in office. They suggest he has now become something of a liability for Mr. Kishida and the LDP.

Mr. Kishida plans to revoke Russia’s most favorable nation status and is strongly supportive of the sanctions backed by the United States, the European Union and all the NATO members.

Beyond sanctions, the international response is difficult to envisage. The United States has warned that the war in Ukraine "will not end easily or rapidly” and there will be difficult days ahead for the military and civilian population. President Biden’s goal in traveling to Europe was to try to ensure that the allies stick together over the long term.

Yet no one wants to provoke the third world war. And Europe’s leaders remind America of the extreme danger of a direct conflict between NATO countries and a nuclear-armed Russia.

I expect Mr. Kishida was exhausted following his trip to Europe and tour of Hiroshima. I detected a weary tone when he spoke on Sunday at a graduation ceremony for the National Defense Academy in Yokosuka, Kanagawa Prefecture.

He said Russia's invasion of Ukraine threatens to shake the very foundation of the international order and could potentially lead the world to the greatest crisis since World War II.

His audience must have felt deep anxiety upon hearing these words. Japan seems more vulnerable than before, especially with an aggressive Russia at its borders. Let us hope the nation never faces the horrible scenarios which are preying on the mind of the prime minister.

Author Duncan Bartlett is a regular contributor to Japan Forward. He is the Editor of Asian Affairs magazine and a research associate at the SOAS China Institute, University of London. He is currently a teacher on an online course for Economist Executive Education entitled “International relations: China, the US and the Future of Geopolitics”.