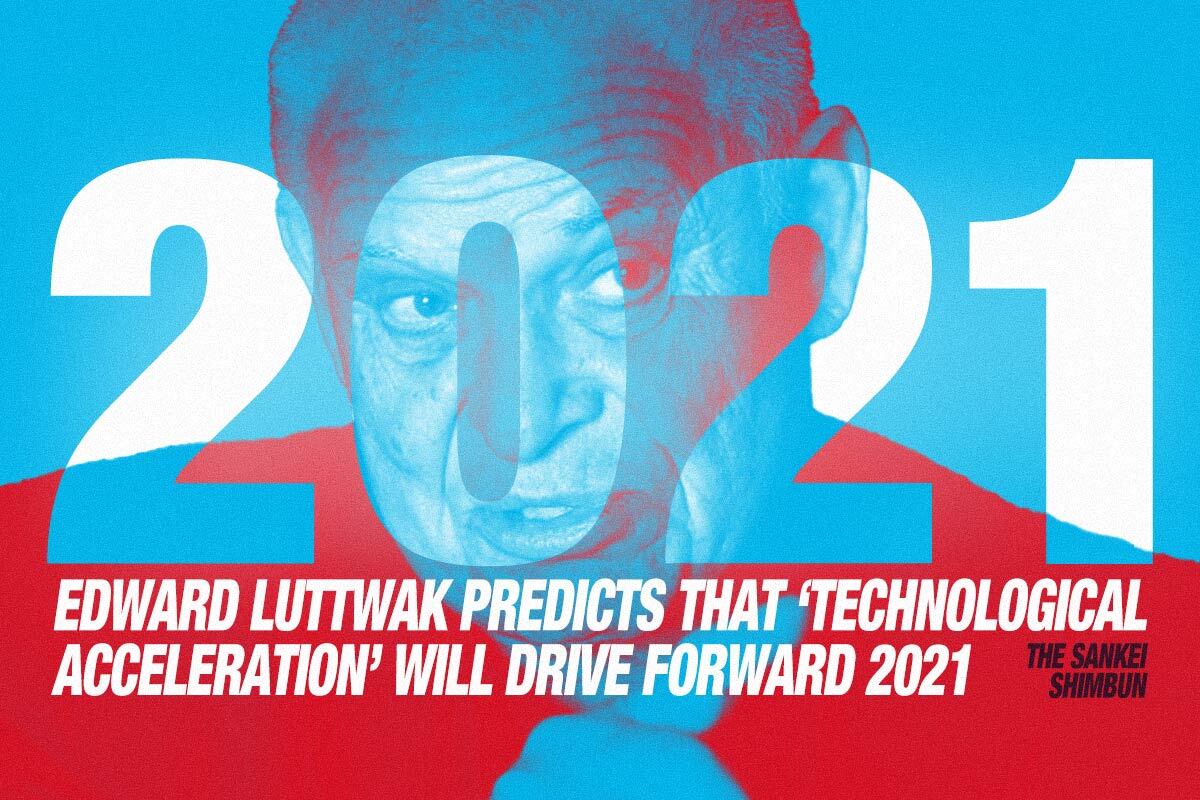 ~ Democracies are always appearing, they always seem weak, but historically they win as they correct their mistakes. ~

COVID-19 has caused us to re-evaluate the relationships among countries and people in the world. What will be the threats, and what roles will the new world order take on in the coming year? What will be the operative word of 2021?

In this installment, we share the thoughts of Edward Luttwak, who focuses on the key word “Techno Acceleration” and the role technology has acquired in our lives ー and how we must learn to control it.

What will be the key word of the coming year?

The entire world has been sitting in a cinema, watching a very bad film without being able to get up. Once the vaccine is distributed, then people will leave the cinema and go out back in their normal life.  Except, they will discover there have been many changes.

My slogan is “Techno-Acceleration”, [because] technical changes have been happening for a long time, but now it has jumped ahead.

In this techno-acceleration there is going to be some further disequilibrium generated, due to increased wealth inequality.

Geopolitically, China gained one year in the race because it was able to control the virus by using the measures a totalitarian government has and this has brought out the China threat and made it much more prominent. This China threat puts responsibilities on governments.

What message do you have for a middle power country such as Japan to fight China?

You look at the Chinese and they can do everything except strategy. For the last 1500 years there has been no Chinese government that was able to do strategy.

They started a border fight with India, they sank Vietnam ships, all of that in [the span of] ninety days. Today there is a campaign by China against Australia. The purpose is to block imports from Australia and to generate pressure by exporters on governments. This is not behavior of a great power.

The U.S., U.K., Canadians, have all offered maximum support for Australia. There is complete silence from India. A few months ago, the Chinese were pushing on India, and Australia was one of the first countries to support India.

China is a threat that Japan, India, Australia, the U.S., and France can deal with, but only if they accept that they are in the same group. We don’t need an organization like NATO, or bureaucrats, but simple understanding.

If Japan allows Australia to be humiliated and isolated, Japan’s turn will be next. I expect that the [Yoshihide] Suga government will come out with a strong statement in support of Australia.

For example, if Japan does not have a way to help Taiwan in case of an invasion, then the Chinese might take Taiwan. But if the Chinese take Taiwan, Japan would suffer a catastrophic security loss. If that is true, it follows that the Japanese government has to do something, and they can.

I don’t think China will be faced with huge economic problems or population problems. They overcame the (COVID) crisis, they will do it again. Their failure will be strategic. The reason why they make mistakes in strategy is because the emperor makes all the decisions and he doesn’t have anybody to correct him.

Do you think there will be the end of democracy?

Democracies are always appearing, they always seem weak, but historically they win as they correct their mistakes.

Do you think there could be military confrontation between the US and China?

Incidents could happen. In the Chinese system, when an officer is doing something provocative, he gets promoted. There was an incident in April 2001 when Chinese fighter aircraft hit an American patrol aircraft. He died in the incident, he became a hero in China.

Incidents are possible, but neither Washington nor Beijing will allow an incident to escalate. This is not war. This is pushing and counter-pushing. And both sides are convinced that they will win. From Xi Jinping point of view, world domination is his only way to survival of the regime.

What’s happening today right now between China and Australia is about shutting up. They want the Australian government to stop talking about Chinese responsibility in the Wuhan epidemic. They tried to make the people in Hong Kong shut up. They could not do it, so they have to control it directly.

What do you think Japan should do?

Before [Shinzo] Abe, they tried to be friendly with Beijing on the Senkaku Island issue. Just before Abe became prime minister, Japan’s defense minister was in Beijing signing many agreements with Chinese Defense agency.

Abe puts in the new organization, National Security Secretariat. And Japan starts having a foreign policy as an active country, taking responsibility. This must continue.

When Chinese now come back to Senkaku, the United States will answer, others will too, including Australia. The Canadian Pacific Fleet for the first time is active in the Pacific and took part in exercises.

The problem that we Americans see about Japan is the question of demography. The modern state has to grow its own taxpayers, with fertility treatment for women.

What are your thoughts on globalization and democracy?

Many years ago, when we had globalization spreading, there was unwanted economic change in many parts, including the United States. It caused internal change. Today we understand globalization.

What we cannot understand is how to control the technological change. A quantum computer is able to operate at 200 thousand times faster than any other computer. We know that.

However, one consequence will be that the current [systems] that enable global business through codes and computer inscription will not survive the arrival of quantum computing. This is the moment in history when the big challenge is technologies that you cannot stop.

We have institutions that are locked, and are prisoners of all technology. Japan Air Self Defense Force wants to spend a lot of money developing a new jet fighter. If you are not an expert, it’s a two engine jet fighter, it looks just the same as a 1944 German Messerschmitt. In the military area there is a lot of stubbornness, a lot of money is wasted. Israel on the other hand, is not spending on the next tank, or fighter jet.

We know that there is big technology change. But these institutions have walls, they are protected by bureaucracy and they are not responding. This could be a big problem.

Do you expect an escalation in tensions with North Korea in the transition to a Biden administration?

The current situation is terrible, but it‘s better than the alternatives. North Korea is what is called a predicament, something you don’t like but you cannot do anything about it.

What are your thoughts on large technological monopolies?

In China, Xi Jinping discovered that Alibaba is too powerful. Mr. Ma is more popular than Xi Jinping, so they are deciding to move.

What lessons do you think we will carry with us post-corona?

One of them is that if there is COVID-19, there could be COVID-20. So we really need to be serious about having machinery in place, the way South Korea had. Japan also did very well. We need more of it, America, Europe, will have to learn from this and do it.

And then for example, in certain cities of the world like Venice and Kyoto, I hope people learned that tourism has to be controlled. Before COVID, Kyoto had been destroyed by mass tourism, as had Venice, and at the same time the economy became tourist dependent. There are many countries that live on tourism which have learned tourism can disappear.

I hope that one of the things we will do is to learn from the experiences of other countries. Also, Australia did very well in controlling it with a completely different method than the Koreans, it tells us the difference between allowing technology to exist and using technology in a positive way.

I would say when we choose our politicians it would be quite useful if we allowed room for the politicians who say “I understand technology, vote for me.” That has not been a subject in politics, it should be.