Political Scientist Yuichi Hosoya: The World is Entering a ‘New Short 21st Century’ Unlike the Past 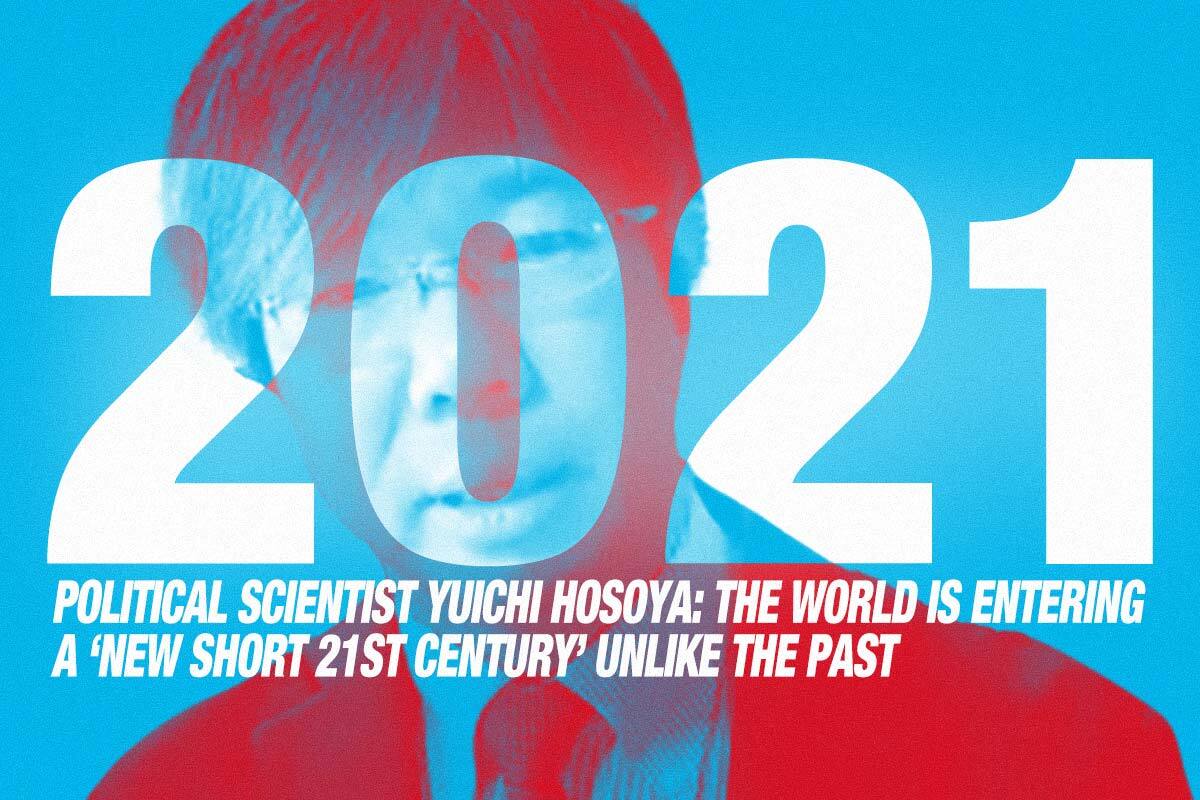 COVID-19 has caused us to re-evaluate the relationships among countries and people in the world. What will be the threats, and what roles will the new world order take on in the coming year? Will it be China’s century? And what will be the key word of 2021?

In this installment, we share the ideas and perspective of Yuichi Hosoya on a new century beginning in the aftermath of COVID-19, but not one that belongs to China. In the process, he talks about the future economy, the role of “middle powers” Japan and the EU, and the resiliency of democracy.

I think “a new century” will be a key phrase. Previously, the British historian Eric Hobsbawm said that a short century began in 1914 with the start of World War I. This time, the paradigm has shifted due to COVID-19  instead of a world war, and I think a new century will start in 2020 or 2021.

However, I don’t think this “short 21st century” will be China’s century. China will have an aging society within the next 10 years. The working-age population will shrink drastically, and China – which has insufficient social security – will be adversely affected. As a result, the country will undergo an unprecedented financial crisis, and this will probably lead to political instability. China has only 10 more “bonus” years.

Meanwhile, in 10 years’ time, I think that India will overtake China as having the world’s largest population, and the U.S. will remain extremely strong as an economic and military superpower. The extent to which the EU and Japan win back power is also important, but ultimately, I think the next 10 years

will determine the nature of the “short 21st century”.

What do you think of the earlier talk of Japan having to prepare to go it alone as a middle power?

I strongly agree with Dr. Attali’s point that Japan will have to endure going it alone. The U.S. will not always help out Japan.

Within the EU, French President Macron’s “strategic autonomy” vision is gaining emphasis, and in a similar way, I think Japan needs its own strategic autonomy, probably more than ever before.

Arguably though, Japan has already been working on strategic autonomy since about five years ago. During the first four years of the U.S. Obama administration, the U.S. tried to develop a new type of superpower relationship with China, dubbed the G2, in order to solve issues in Asia.

How did Japan respond to this reality of not always being supported by the U.S.? It created an Economic Partnership Agreement (EPA) with the EU, despite wanting to deepen its alliance with the U.S. In doing so, Japan helped form the world’s largest free-trade bloc.

In fact, Japan has cooperated with the EU over various issues in the past, such as climate change and data governance, in addition to the EPA and Strategic Partnership Agreement.

Moreover, when its relationship with the U.S. Trump administration worsened, the EU initially tried to get closer to China – but difficulties in this area meant that the EU was probably forced to strengthen its ties with Japan.

It’s likely that Japan is not that important a trading partner for the EU. However, I think that both the EU and Japan found themselves in an era in which relationship building with the U.S. and China has proved to be difficult.

Another factor worth considering is the approach to the Trans-Pacific Partnership (TPP), which took effect as the TPP-11 in December 2018. Japan went ahead with the agreement – despite the U.S. withdrawal by the Trump administration – together with countries such as Australia, New Zealand, Singapore, and Canada. This was an example of Japan exercising strategic autonomy, independent of the U.S.

As Canadian Prime Minister Trudeau pointed out, the TPP could not have been formed without Japan’s leadership. The U.S., China, India, and Russia are not involved in the TPP. To an extent, Japan took the initiative on its own, while also ensuring that its American and Chinese ties did not worsen, at a time when there was tension between the U.S. and China.

Regarding Japan-China relations, I think it is difficult to create a close France-Germany style relationship with a country like China that has different systems, and which uses historical-perception issues for political gain.

It is not impossible but it is certainly not easy. As I stated earlier, Japan’s partners, away from the U.S. and China, are democracies such as the EU, Australia, New Zealand, Canada, and India. Japan may have fought against Britain, France, Australia, and India in World War II – but it has since reconciled with all of these nations.

What do you think of the suggestion that the power balance between authoritarian states and democracies has crumbled due to COVID-19?

At this point, the “winners” have not been decided. The actions that each country takes over the next 10 years will be more important. Dr. Luttwak said that Japan needs to have a lot more babies to solve its population issue. However, I do think that each country needs to tackle its own problems to reach a higher position within the global community.

Essentially, I think that global economic and military power is divided among the U.S., China, India, Russia, Japan, and the EU. Japan is a solid ally of the U.S., making it somewhat difficult for China to get close to Japan.

Therefore, China is trying to detach Japan from the U.S. and create an Asian economic bloc centered around China. However, many Japanese people currently see China in a negative light. I think it’s very unlikely that Japan and China will form an alliance.

Japan has a good relationship with the other three democracies in this list of six. However, China has made a number of enemies. As a result, the coalition across the four democracies has become stronger. In the next 10 years, I can’t envisage democracy slipping away, and authoritarianism becoming the main form of governance in this world. The past 10 years has seen each country solving its own problems. If democratic alliances get stronger, I am sure that democracy will continue to be central across the world in the 21st century as well.

Is it possible that North Korea will be a focus again as a cause of instability in the Asia-Pacific?

I think the maxim of North Korea, South Korea, ASEAN countries, and many Middle Eastern nations is to use major powers  effectively. In other words, these countries approach certain major powers whenever they are struggling in order to benefit their own situation.

Therefore, North Korea has not had to compromise on issues such as the abduction of Japanese people, nuclear development, or its program of simultaneously developing the economy and nuclear weapons. I don’t think North Korea will change its stance after Joe Biden becomes the U.S. president. I think it’s important that Japan applies sufficient pressure on North Korea to ensure that the situation does not worsen.

Could capitalism change as a result of COVID-19?

A free flow is necessary here, but it is not controlled by the state as in China’s case. It involves independent individuals and firms deciding on a certain number of rules, and creating trust. However, this model is unlikely to catch on across the world.

I think that the post-corona world will consist of the American model, the Chinese model, and other models such as Japan – EU/TPP. I believe the way in which these three models are adopted will have a major impact on the overall global situation.

I think the most important thing is to move on from the idea of returning to how things were pre-corona. As humans, we can only go forward. It is pointless trying to return to the past.

There have been attempts to create a world free of nuclear weapons, following the atomic bombs dropped on Hiroshima and Nagasaki during World War II, but such a world has not been achieved.

The invention of nuclear weapons has led to an era of nuclear war. We have been terrified by their devastating effects on humankind. However, people have managed to cope with atomic weapons being in existence.

Earlier, I spoke about entering a “new century.” By not trying to return to the past, I think we can learn to somehow live positively in the age of COVID-19, in a similar way to the age of nuclear deterrents and nuclear war.

COVID-19 has changed history that much?

Humans have lost many things over the past thousands of years. For example, the Hapsburg dynasty, the Bourbon dynasty, the Qing dynasty, the Empire of Japan, and the Meiji constitution have all come and gone. However, we adjust to new eras.

Similarly, we need to move on from the before-corona era, and adjust to the with-corona and after-corona eras. This adjustment might take time. But I think that the people and countries who adjust to this change quickly will end up leading the new global era.

Yuichi Hosoya, PhD. is a professor at Keio University in Japan. Previously, he was part of the “Prime Minister’s Advisory Panel on National Security and Defense Capabilities” under the Shinzo Abe administration. Originally from Chiba Prefecture, he is a specialist in British diplomatic history and European international political history. His most recent book is titled, Atarashii Chiseigaku (published by Toyo Keizai Inc., 2020).