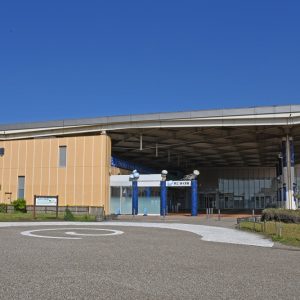 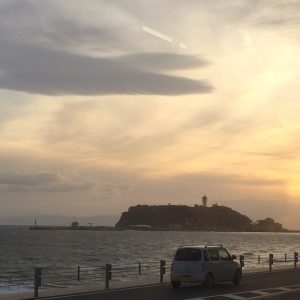 My company, which was founded close to 67 years ago, is in the business of planning and operating public aquariums. Times change and we have entered an era where people have become increasingly aware of the irreplaceability of the environment of our planet and feel acutely the value of living creatures within that environment.

Our company firmly believes that in order to address these concerns it is our mission to offer an innovative form of aquarium exhibits and programs through our “edutainment” (education + entertainment) facilities.

Our core holding is the Enoshima Aquarium (Shin Enoshima Suizokukan or “Enosui” for short). This privately-operated aquarium was established in 2004 within the Shonan Kaigan Prefectural Park in Kanagawa Prefecture. It was the result of a private sector financial initiative (PFI), a method for channeling private capital to projects for social investment.

Actually, the Enoshima area was already well-known since it was here that the famous Harvard University zoologist and amateur archaeologist Dr. Edward Sylvester Morse established Japan’s first marine research lab in 1877. He had journeyed all the way to Japan from the United States during the early Meiji period, having heard that Sagami Bay, which Enoshima faces, was a treasure trove of marine life.

This pioneering coastal facility for marine research was where scientific study of marine life in Japan really began.

This was also the site where the original Enoshima Aquarium was built in 1954. It was the precursor of today’s “New” Enoshima aquarium, and was dubbed “Japan’s first modern aquarium” because it was the country’s first aquarium building that has installations of display tanks equipped with life support systems such as water circulation through filtration. It also attracted many visitors as the source of the latest findings and locus of study in the field of marine biology. Ikusaku Amemiya, the aquarium’s first director, could also trace his academic lineage directly back to Dr. Morse.

Later, in 1957, the Marineland was built next to the aquarium. It was there that the first real shows featuring dolphins and other cetaceans started and these beautiful animals had the opportunity to display their amazing abilities. That was the inception of the tradition of cetacean shows at Enoshima that continues to this day.

At that time the animals on display were bottlenose dolphins and Risso’s dolphins captured by fishermen based in Futo Harbor on the Izu Peninsula. The dolphins were transported by land from the Izu Peninsula over the mountains via the Hakone Pass to Enoshima, where they were released in the Marineland pools.

In other words, our aquarium began its tradition in cetacean shows through close collaboration with fishermen.

For more than six decades since, these shows have been an indispensable part of our work at the aquarium and the dolphins continue to be cherished by our visitors.

A Natural Love Of Dolphins and Other Cetaceans

The ocean surrounds Japan on four sides, which means that familiarity with the sea is an integral part of the Japanese national character. It’s perhaps not surprising then that Japan devotes a proportionately large amount of land to sites for aquariums.

In fact, there are roughly 100 aquariums nationwide, of which about 40 are raising bottlenose dolphins, pacific white-sided dolphins, false killer whales, finless porpoises, or other cetaceans. The dolphin shows staged by these facilities are the direct result of the good relations of aquariums and fisherman who capture these various cetacean species.

In April 2015, WAZA notified its Japanese counterpart JAZA that the acquisition by aquariums of cetaceans which had been caught by “drive” fisheries methods violated the WAZA code of ethics and animal welfare. It then suspended JAZA’s membership in the world body.

JAZA acceded to WAZA’s unreasonable demand in this regard, and in June 2015 JAZA adopted a measure prohibiting member aquariums from acquiring cetaceans captured by drives. As a result, it was reinstated into the international organization.

However, Japanese aquariums belonging to JAZA could no longer acquire cetaceans from fisherman who had captured them in the wild. Instead they needed to be sourced by captive breeding.

In response to this order from JAZA, Enosui made its own decision to leave JAZA effective at the end of March 2017. Our reason for doing so was not that we needed to immediately acquire dolphins from ocean; rather it was because we concluded that preservation of the existing trilateral relationship — the government(Fisheries Agency), fishermen, and aquariums — was fundamental of aquariums who exhibit cetaceans in their facility.

These triangular ties represent a symbiotic relationship that was forged before JAZA ever became a member of WAZA. They were developed through a process of constructing unbroken ties of mutual trust. This historical background needs to be kept in mind when considering Enosui’s exhibition of dolphins.

A justification for the owning of wild marine animals by aquariums is their mission to “preserve species.” But at the same time the public has great expectations from them as facilities that can facilitate “sustainable use of marine animal resources” based on the scientific basis established by the government (Fisheries Agency).

As I noted earlier, if it had not been for the fishermen who provided cetaceans they had captured, our aquarium would never have been able to display these animals. That is how we started out. For that reason, we were strongly resolved not to be the party that destroyed this triangular relationship, which left us no choice but to part ways with JAZA.

Of course, we fully realize that “species preservation” is another core reason for our activities. This is evidenced by the fact that we have sought to utilize a variety of techniques in our research on cetacean breeding.

It is further demonstrated by the fact that in 1959 Enoshima Aquarium, as it existed then, became the first facility in Japan to successfully breed bottlenose dolphins in captivity.

Building on this earlier research, Enosui  in 2012 became the first facility worldwide to breed a fifth generation of bottlenose dolphins in captivity. This shows that, as a matter of course, we are doing as much as we can to allow marine animals to carry on in their existing environment — in other words, to “preserve the species.”

The most important consideration for our aquarium is to maintain a balance in our work. That includes finding a balance between the promotion of research concerning breeding these marine animals and ensuring continuation of the productive triangular relationship. We firmly believe that is what our aquarium is all about.

(Follow this link to read more about Japan and the history of whales and humans.)