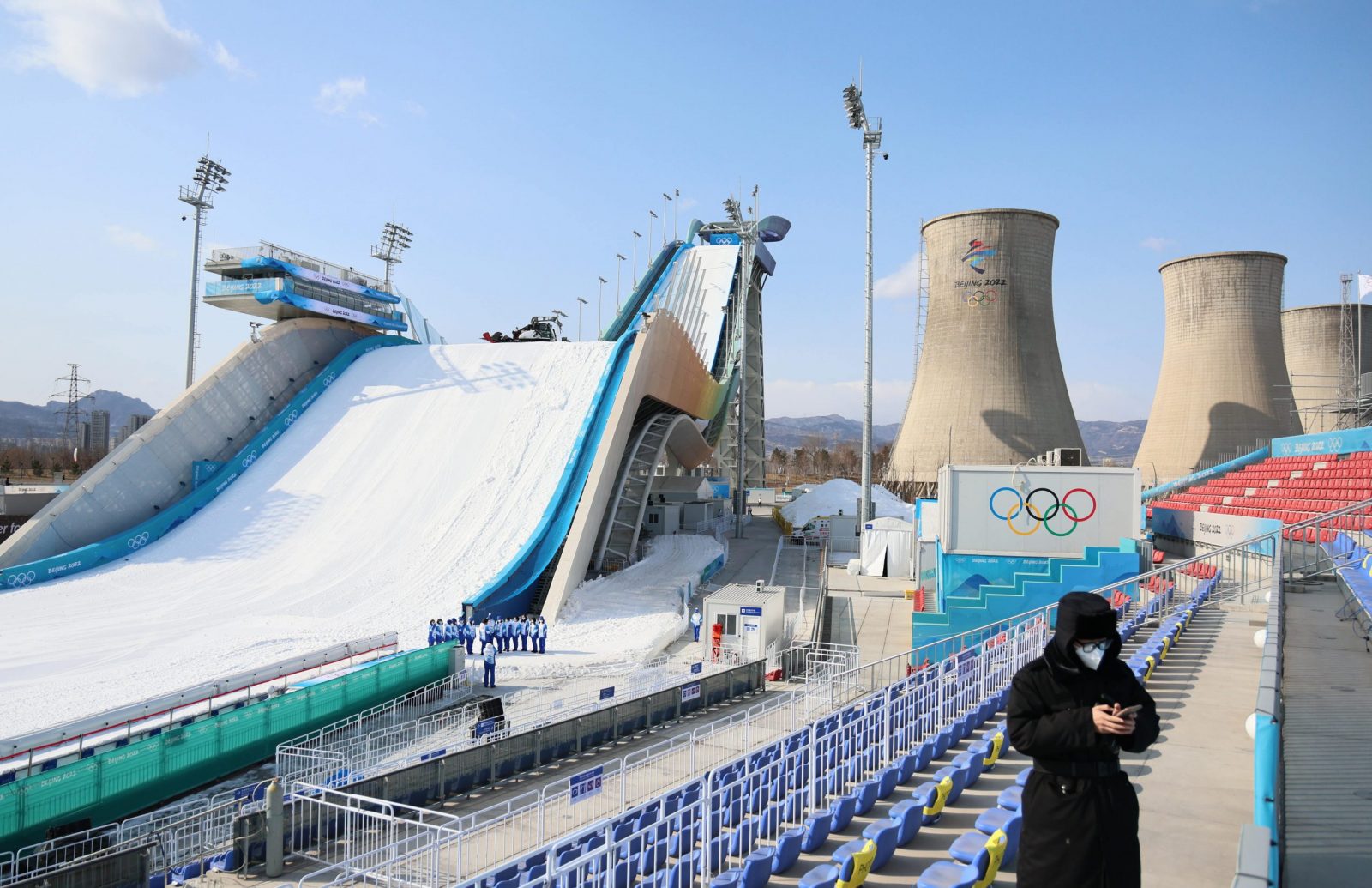 As the Beijing 2022 Winter Olympics approaches the closing ceremony on February 20, many have noticed that the host city isn’t exactly a natural winter holiday destination.

Despite having cold temperatures, Beijing gets very little snow in an average year.

The Zhangjiakou area, about 200 kilometers from Beijing, is home to four Olympic venues, including the National Ski Jumping Centre, and the Genting Snow Park (used for the mogul, halfpipe etc). Yet, it’s in one of the driest areas of the country due to industrial development and climate change.

Many of us watched on February 11 as the women’s Super-G competition took place on an artificial snow-covered course that was eerily surrounded by stark, brown, snow-less earth.

It’s just one of the signs of Beijing’s status as the first Winter Olympics host city to be almost completely reliant on artificial snow. We look at some of the logistics — and risks — involved.

Artificial snow was first used at the Winter Olympics in Lake Placid, New York, in 1980 to supplement the area’s natural snow.

Indeed, the technology has increasingly played a role in elite competitions and in the snow sports business to reduce reliance on the erratic fall of natural snow.

What are some of the logistics in having artificial snow?

The first hurdle is procuring such a vast quantity of water.

For the Games, the International Olympics Committee (IOC) estimated that they would need about 2 million cubic meters of water — the equivalent of the contents of approximately 800 Olympics pools.

The IOC has said that this would not interfere with the supply of water locally, and that the water was sourced from rainfall and recycled. Beijing has also argued that all the energy to make artificial snow is sourced from renewable energy production, and that the redirection of resources from agriculture to tourism would make up for the changed landscape in the area.

The fact remains, however, that it’s a very energy-intensive process. There are the logistics and environmental impacts in transporting the water, usually uphill, requiring energy to pump the water forward, as well as depletion of water at the source.

Once it arrives, there can be loss of water of up to 40% due to evaporation and strong winds. There are the challenges of having the artificial snow stick to the arid ground of the region around Beijing, and then getting rid of the water afterwards.

In fact, the IOC, in its evaluation of the host cities for the 2022 Winter Games, found that China had been optimistic in its estimates for the need of snow: “The Commission considers Beijing 2022 has underestimated the amount of water that would be needed for snowmaking for the Games but believes adequate water for Games needs could be supplied.”

The findings also stated that China had probably overestimated the capacity of recapturing snow.

The same report admitted the ethical concerns of developing an area which is so arid, as “it is extremely difficult to reconcile such anticipated high levels of economic development with the continuing effects of climate change and increasing aridity across the region.”

Organizers have said “no” to this on the Olympics official page, explaining that the flexibility in the making of the man-made snow allows for adapting the snow to the needs of the competition.

Some athletes say they prefer the hard consistency of artificial snow, claiming it provides for better performance.

Others, however, have pointed out that the artificial snow landscape, which is more compact, can be more dangerous for athletes.

Estonian Olympic biathlete Johanna Taliharm told the Associated Press in January that artificial snow was “faster and more dangerous” because of the icing.

Several experts in geography and environment at Canada’s University of Waterloo, among others, collected anonymous surveys of over 300 athletes and coaches from 20 countries on the safety of artificial snow.

They found that, under the current climate trends, unfair-unsafe conditions had increased over the last 50 years across the 21 Olympic Winter Games host locations.

Is this a sustainable model?

The pool of locations that are eligible to host large events such as the Winter Olympics is becoming smaller, and one of the reasons Beijing was selected as a host city in the first place.

Producing artificial snow can take up to half the energy costs of a ski location, according to a report released by NPO Protect Our Winters and National Resource Defense Council (NRDC).

On this front, there is another study by several experts, including Dr. Madeleine Orr of Loughborough University, titled “Slippery Slopes: How Climate Change is Threatening the 2022 Winter Olympics.”

In the report experts highlight how the snow at the Beijing Games requires eight water cooling towers, 130 fan-drive snow generators, 300 snowmaking guns, and three pumping stations at different altitudes to feed the snow guns. The amount of energy resources required to drive them is not given.

This is all to make approximately 1.2 million cubic meters of snow, with an estimated cost of $3 USD per cubic meter.

The cost of sustaining snow sports in China is set to balloon, considering that the country has pledged to achieve a target of 300 million nationals involved in winter sports in a country which does not have the natural features normally associated with such sports. It is likely achievable only through the extensive use of artificial snow.

The financial costs and environmental sustainability of such infrastructure are becoming topics of discussion, and may explain why cities are increasingly reluctant to pitch their bid to host the Olympic Games.

For the Winter Olympics and Paralympics in 2022 only two cities had entered their name in the pool of candidate hosts: Almaty in Kazakhstan, and Beijing in China.

The next Winter Games are set to take place in Milano Cortina, Italy, in 2026. The question will be if the hosts can demonstrate ways of making these winter sports competitions more sustainable for future generations.