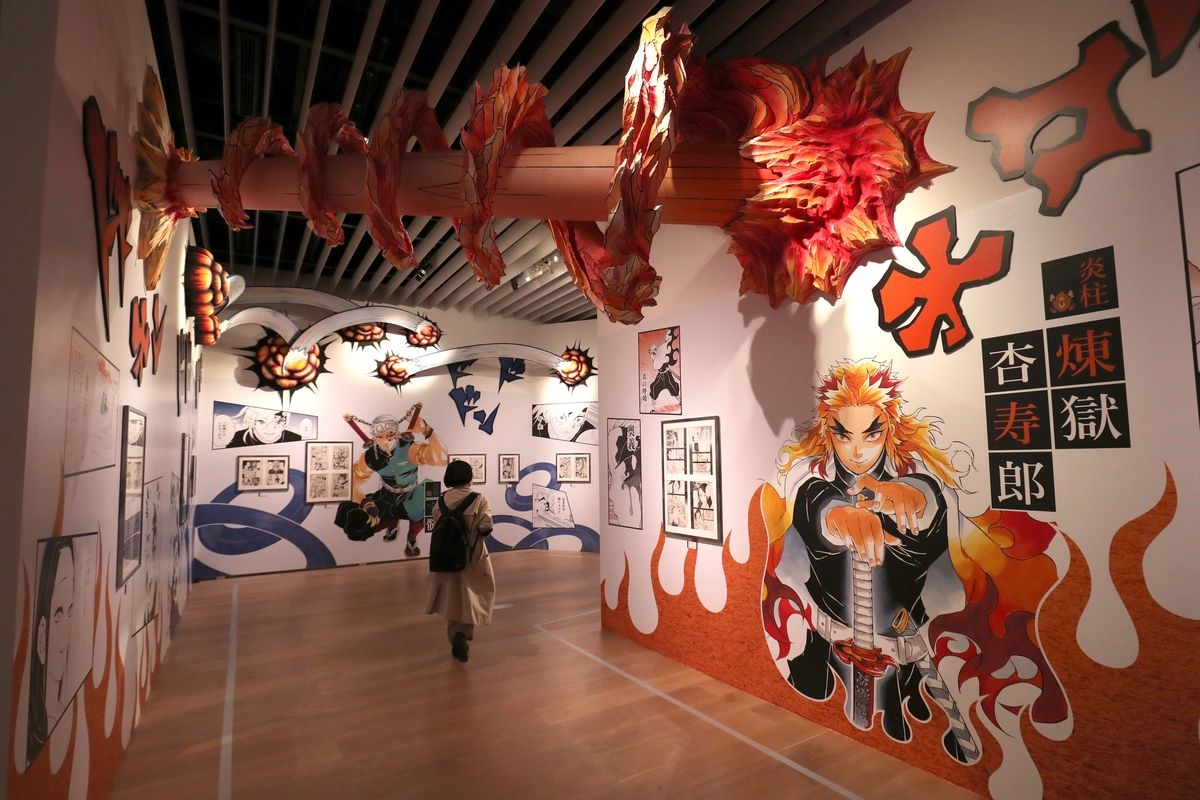 The first exhibition of author Koyoharu Gotouge’s original drawings of in the long lasting manga series "Kimetsu no Yaiba” (Demon Slayer), is underway at the Mori Arts Center Gallery in Minato-ku, Tokyo, until December 12.

While the artist’s identity remains a mystery, many believe she is a woman. In today's digitally dominated manga world, Ms. Gotouge stands out for using the traditional method of drawing with pen and paper. The original drawings show the unique movement and evolution of her lines.

The plot follows the protagonist Kamado Tanjiro who becomes a demon slayer after his family was massacred by a demon. The plot follows his life as he is determined to avenge his family’s death and save his younger sister Nezuko, who has been turned into a demon. Although the manga series has ended, the story remains extremely popular.

This exhibition in Minato-ku is divided into five main zones, with more than 450 original drawings depicting Tanjiro’s journey as he meets his friends, interacts with senior “leading” swordsmen, fights with enemy demons, and faces the final battle.

Nine illustrations will also be shown for the first time, including one depicting the real face of Sakonji Urokodaki, Tanjiro’ master whose face has been hidden behind a tengu (red-faced, long-nosed goblin) mask.

In addition to the good dialogue and skillfully detailed strokes, one feels the power in the original graphics which the artist herself selected for the exhibition. There is also an interesting panel, which shows some of the famous dialogue and scenes of Tanjiro and other characters.

As the serialized story progresses, the drawings become more elaborate and persuasive. One can imagine the extreme physical and mental demands the artist must have experienced to meet the weekly series deadline, and one can see how the lines were drawn and polished up in a short time.

As the final battle approaches, the visitor can feel something fierce, even spine chilling in the images. The male characters are drawn with powerful lines, while women tend to be represented with gentler strokes. What is also impressive is that there are few traces of corrections.

The manga has continued to sell, even after the series ended in May 2020, and the cumulative circulation (including the digital version) has exceeded 150 million copies.

The box office revenue of the animated movie Demon Slayer -The Infinity Train (original title: Kimetsu no Yaiba: Mugen Ressha) (Ufotable), released in October 2020 surpassed ￥40 billion JPY (about $350 million USD), and became the most-watched anime movie of all time. It is currently being broadcast on Fuji TV and other channels.

People's feelings create immortal bonds. Tanjiro continues to fight, thinking of his family, friends, and mentors. This message dominates Gotouge’s work and also appears in the key visuals of the exhibition.

Anyone who visits this exhibition and comes face to face for the first time with this work will be amazed and moved.

In Osaka: At the Grand Front Osaka complex, Kita-ku, Osaka

Entry: All tickets must be purchased in advance for entry by the specified date/time. No tickets will be sold onsite.

Price: Tickets for the general public vary from ￥2,000 ($ 17.30 USD) down to ￥700 JPY ($6 USD), depending on age and day of the week (weekends are more expensive). Specific price information and the link to purchase tickets can be found here.

Website and additional information can be found at this link.