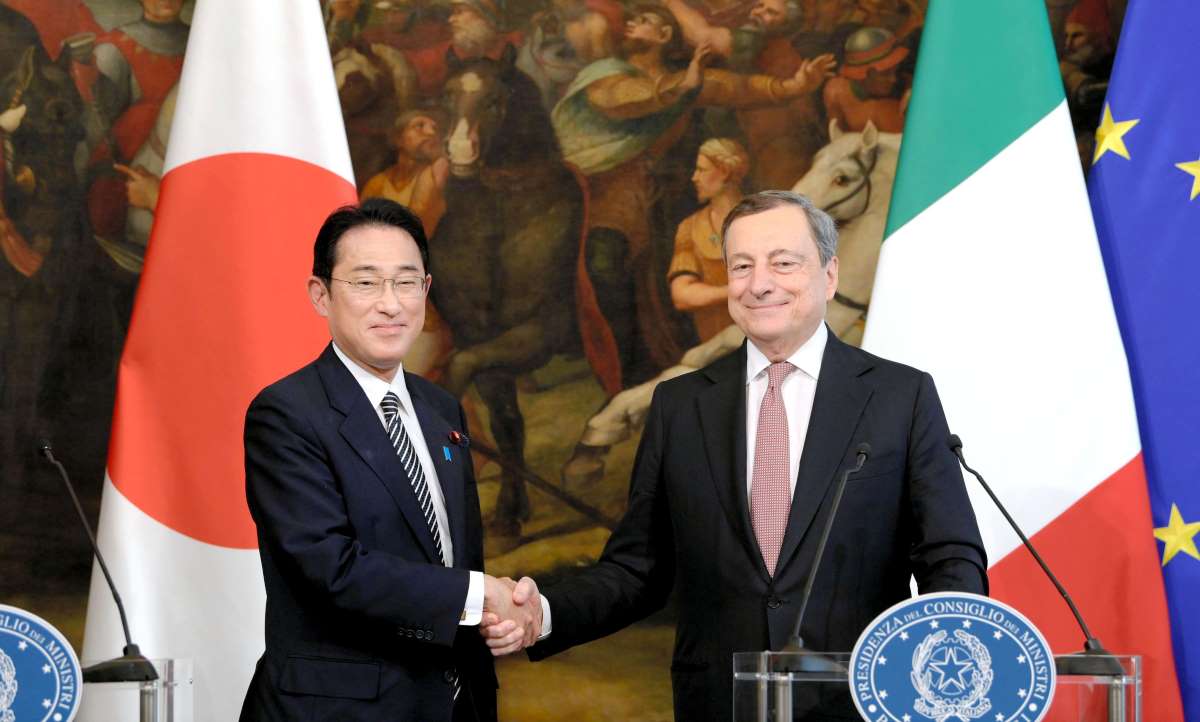 For the first time since 2019, on May 4 the Prime Minister of Japan headed to Italy for an in-person summit with his Italian counterpart.

The meeting between the two heads of state was key for both countries, as it shows once more how geopolitics has taken center stage in bilateral relations around the world in the wake of the war in Ukraine.

In fact, the two leaders reaffirmed their “condemnation of the Russian invasion of Ukraine” and wish to strengthen sanctions on Russia, along with support for Ukraine.

“Japan and Italy are working hard so that a truce is reached as soon as possible, even on a local level, to allow the evacuation of civilians and promote peace negotiations,” said PM Draghi in Palazzo Chigi in Rome, referring to a joint statement of the leaders.

“We stand at a crossroad” said Kishida, continuing and echoing the sentiments expressed by Draghi:

“It’s important that the international community, starting from the G7, responds resolutely to the current aggression, […] and that our countries have a common responsibility to sustain the government and the people of Ukraine with all our might.”

It’s significant that Kishida visited Italy first on this European trip, as Draghi has been calling for European leaders to rally more strongly in support of Ukraine. Most recently on May 3, he called upon the European Parliament in Strasbourg to change its treaties due to the challenges since the start of the war.

In a continued mosaic of international visits, Chancellor Olaf Scholz had picked Japan as his first Asian country to visit since becoming Germany’s leader on a trip, making the journey from April 26-28.

Kishida, before arriving in Italy, had made stops in Southeast Asia, where he visited leaders of Indonesia, Vietnam and Thailand.

Italy Thanks Japan on the Energy Front

Prime Minister Draghi was quick to thank Kishida for “accepting with incredible swiftness the suggestion that [Japan’s supply of] LNG gas could be redirected to Europe, when it was previously destined to third countries,” a move which Japan carried out shortly after the start of the conflict in Ukraine in February.

The two countries are, as Draghi put it, “allies in dealing with the war-related emergencies, including the emergency of securing enough energy.”

Japan has pledged to phase out the imports of Russian coal and diversify its energy sources. Russian imports account for just under 10 percent of Japan’s natural gas, and although Japan has temporarily redirected natural gas to Europe, Japan has yet to address its own long term energy needs.

Italy up to now has been reliant on Russia for almost 40 percent of its imported natural gas. Since the war in Ukraine, it has been engaged in bilateral talks with several countries such as Algeria, Congo and Angola to secure alternative sources.

In the wider field of economics, the two countries also showed resoluteness in working together in sectors such as “renewable energy, biotechnology, pharmaceuticals, robotics and aeronautical technologies,” iterated Draghi.

Japan is after all the third largest economy in the world. And for Italy, Japan represents the second largest trading partner in Asia.

For his part, Japan’s Kishida pointed out that “cooperation between companies in our two countries has already started in the sector of hydrogen energy and railway technology.” He stressed the importance of reinforcing cooperation in “renewable energy and connectivity.”

The Geopolitical Situation in Asia

Draghi confirmed that Italy, the European Union and Japan shared the idea of “the importance of the stability in the Indo-Pacific.”

However, a key point this time was that they have a “shared preoccupation” with the intercontinental ballistic missile tests by North Korea, the most recent one on the day of their meeting, May 4.

Draghi said: “We need to stay united and resolute in defending the international rules-based order, also with regards to the [East and South] Chinese Seas and the [Taiwan] Strait.”

This is itself a point of departure from even the most recent bilateral summit between the two countries in 2019. At that time the stress was on the Indo-Pacific, and less on the threats that needed to be addressed in the region.

Kishida for his part pointed out the “tense geopolitical situation in East Asia” and the “strengthening of coastal powers which was both quick and not transparent,” looking at maritime operations in the South and East China Sea.

Earlier in the day, Kishida met with Pope Francis in the Vatican. The last time that the Japanese prime minister visited the Pope at the Vatican was in 2014.

The Pope and Kishida agreed on the aim of achieving a world without nuclear weapons, with Japan being the only country to have suffered the effects of a nuclear bomb. This renewed the emphasis to the beliefs of both parties as previously expressed in 2019.

This time it was expressed in the context of a rising international fear that Russian leader Vladimir Putin might make use of nuclear weapons in the war in Ukraine, threatening global security.

The meeting came in time for the 80th anniversary since the establishment of bilateral relations between Japan and the Holy See.

Their respective meetings with the various parties are expected to set the stage for the G7 meeting in Germany in June.