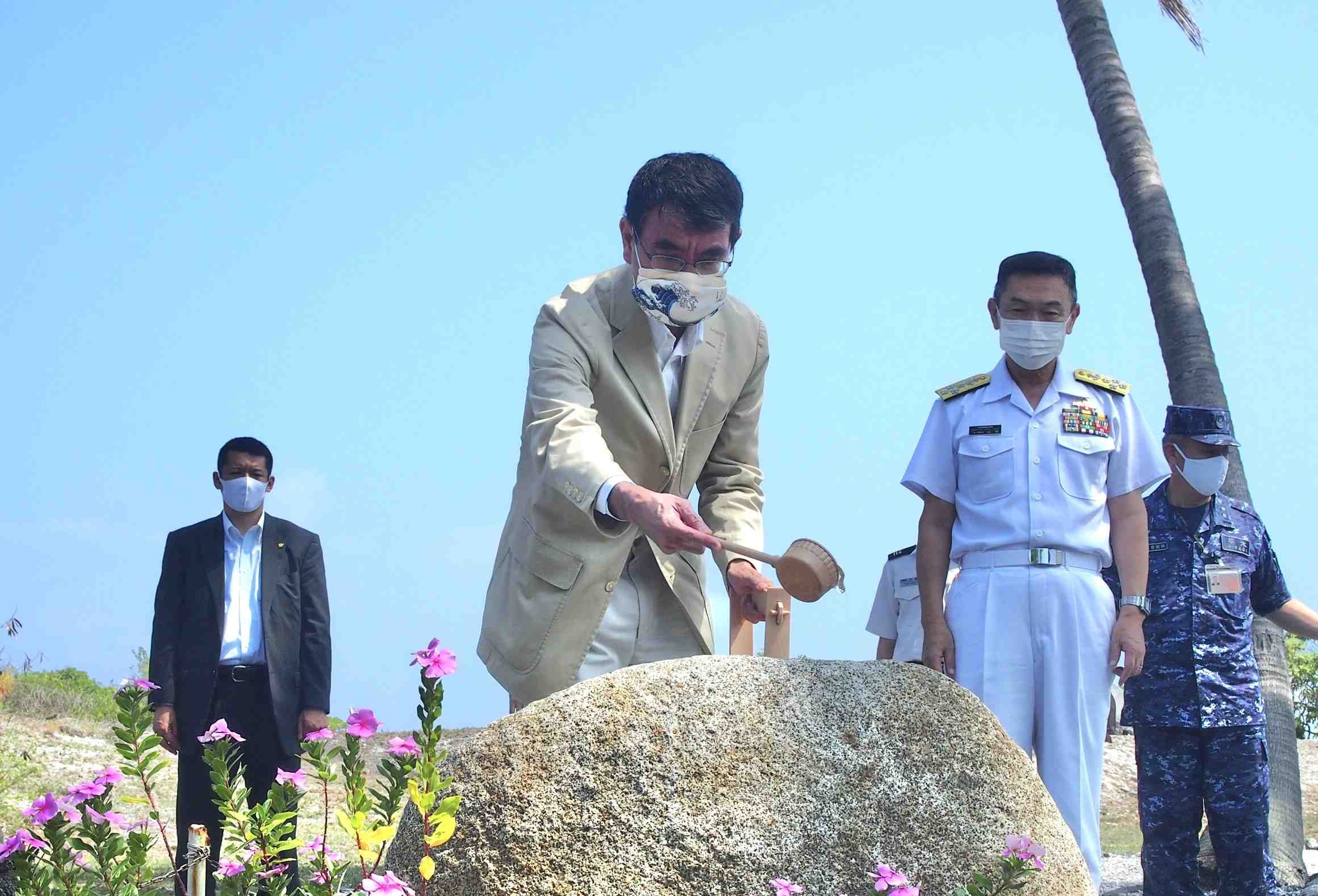 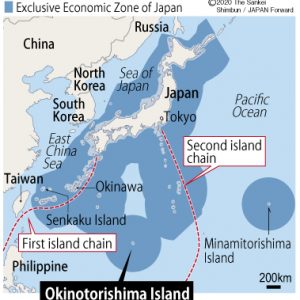 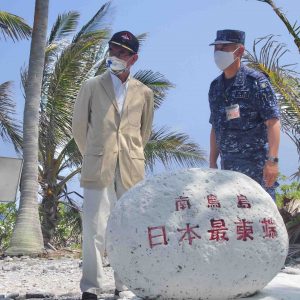 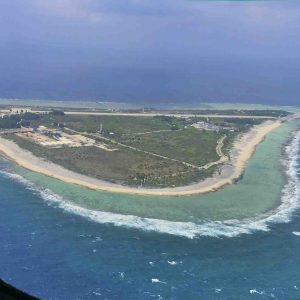 Minamitorishima, the easternmost tip of Japan, floats in the Pacific Ocean about 1800 kilometers away from the main island of Honshu.

The small island, surrounded by abundant maritime resources and home to a twelve-person Japan Maritime Self Defense Force (JMSDF) team known as the Minamitorishima Air Dispatch unit, takes about an hour to walk around. It is a part of Ogasawara municipality of the Tokyo Metropolitan Government.

On July 11, I accompanied Defense Minister Taro Kono on a visit to the island.

Living on the Island is a Mission of its Own

After about four hours of flight aboard an MSDF plane from Atsugi Air Base in Kanagawa prefecture, a straight white line appeared on the surface of the cobalt blue sea stretching out before the aircraft’s front window. It was the silhouette of the island. Because of its flat topography on a base of coral, the island looks like a white line when seen from a distance.

We landed on the island’s runway, to find temperatures of 32 degrees C waiting for us. Measuring 1,370 meters long and 45 meters wide, the runway, built by the former Imperial Japanese Navy in 1936, is in good condition with no significant cracks. Today, its maintenance and management and refueling of SDF aircraft that land there are carried out by the JMSDF air dispatch unit.

The Hinomaru (Japan’s national flag) was hoisted high in front of the administrative building besides the runaway. The water, calm with no fishing boats visible on the open sea, was a short walk from the building.

A total of 191 people lost their lives on Minamitorishima in the Pacific War due to the U.S. military’s air raids, naval bombardment and other reasons.

The wreckage of light tanks and cannons of the former Imperial Japanese Army, as well as other scars of the war such as concrete “pillboxes,” haven’t been removedーeven 75 years after the end of the war. Weeds wrap around the brown wedges of the old structures.

Behind the wreckage was an expansive landscape of a paradise consisting of white coral sand beaches and an emerald green sea. The contrast between the wreckage and beautiful landscape was truly impressive.

In addition to the 12 member MSDF dispatch unit, 20-odd officials from the Japan Meteorological Agency and the Land, Infrastructure, Transport and Tourism Ministry live on Minamitorishima. There is no private plane or passenger ship service, and no tourists.

MSDF lieutenant commander Kenso Mitsusue, who assumed the post of captain of the air dispatch unit in April, described their mission in an interview with The Sankei Shimbun.

“I see living here to maintain the functioning of the facilities (including the runaway) as an important mission,” he said. “It’s a small island at the easternmost edge of Japan, but it is surrounded by a huge exclusive economic zone (EEZ).” He added, “We remind our members that the duties they perform here are part of a lofty mission.”

An EEZ is the sea area over which a country has economic rights over fishery and seabed resources. It can be set up to 200 nautical miles (about 370 kilometers) off the shores of a coastal state.

Japan has an EEZ of around 430,000 square kilometers in the Pacific Ocean, bigger than the entire land mass of the Japanese archipelago, in part thanks to the 1.5 square kilometers of Minamitorishima. Rare earths used for high-tech products have been confirmed to exist in the area on the EEZ’s deep sea floor. 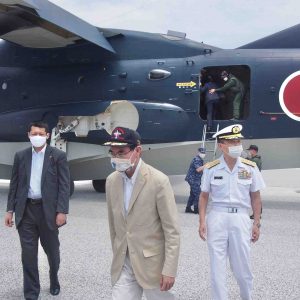 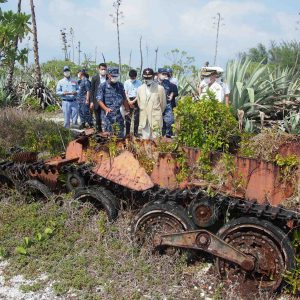 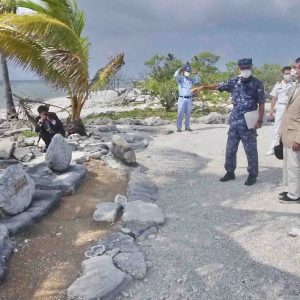 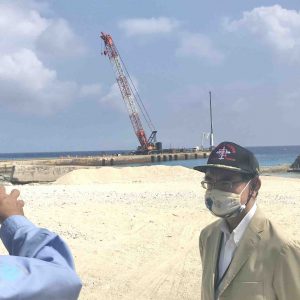 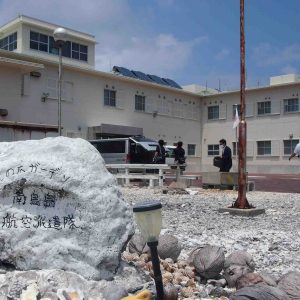 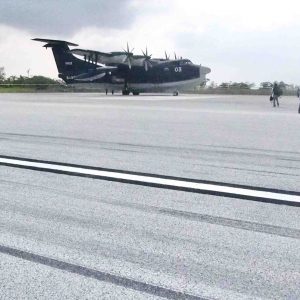 Life on the island has many inconveniences. Food is airlifted weekly by Air Self-Defense Force planes, and mobile phone service through SoftBank has only been connected to the island for a few years. Internet service is almost inaccessible, and TV service is available through broadcast satellite (BS) only. Hobbies on the island consist of physical training, sunbathing, and fishing, for the most part.

There is no doctor. Since it takes four hours to reach Japan’s main island of Honshu where medical institutions are available, careful attention is paid to safety in order to prevent an injury that might become fatal.

The lieutenant commander’s assignment on the island is for one year, while rank-and-file members are rotated in and out every two months.

Defense Minister Kono, after hearing the status of the mission from unit members during his inspection tour, said, “I would like to see an effort made to improve the work environment, even a little.”

We also visited battlefields on the island, a war memorial to the dead, and the construction site for a quay where marine research ships will be moored. The 160-meter-long quay, scheduled for completion in fiscal year 2022, is a construction project of the Ministry of Land, Infrastructure, Transport and Tourism.

“Amid the situation in which Chinese naval vessels and aircraft have been ramping up activities in the Pacific Ocean, we have to seriously consider defending the Pacific Ocean,” Kono said after completing his inspection of the island.

The Defense Ministry’s 2020 annual white paper warns of the Chinese military’s advancement into the Pacific, saying that China is likely to become even more active in the future.

As things stand now, Minamitorishima has not been exposed to direct external pressure. However, in July near Okinotorishima, the southernmost tip of Japan on the Pacific side, a Chinese marine research vessel intruded into Japan’s EEZ and carried out survey activities without prior consent from Japan. There are concerns for similar intrusions in Japanese waters around Minamitorishima, where rare earth minerals lie.

Japan ranks 61st in terms of land area, but it’s EEZ is the sixth largest in the world. As a maritime nation, Japan is sustained by the MSDF members and other Japanese nationals who hoist the rising-sun flag on the solitary island far off in the ocean. They are the ones who manage the unusual living environment and maintain the island’s infrastructure, including the runway. But it is not an easy life.

Although my stay in Minamitorishima was limited to just over two hours, I was able to catch a glimpse of that reality.

(Read the article in Japanese, here.)