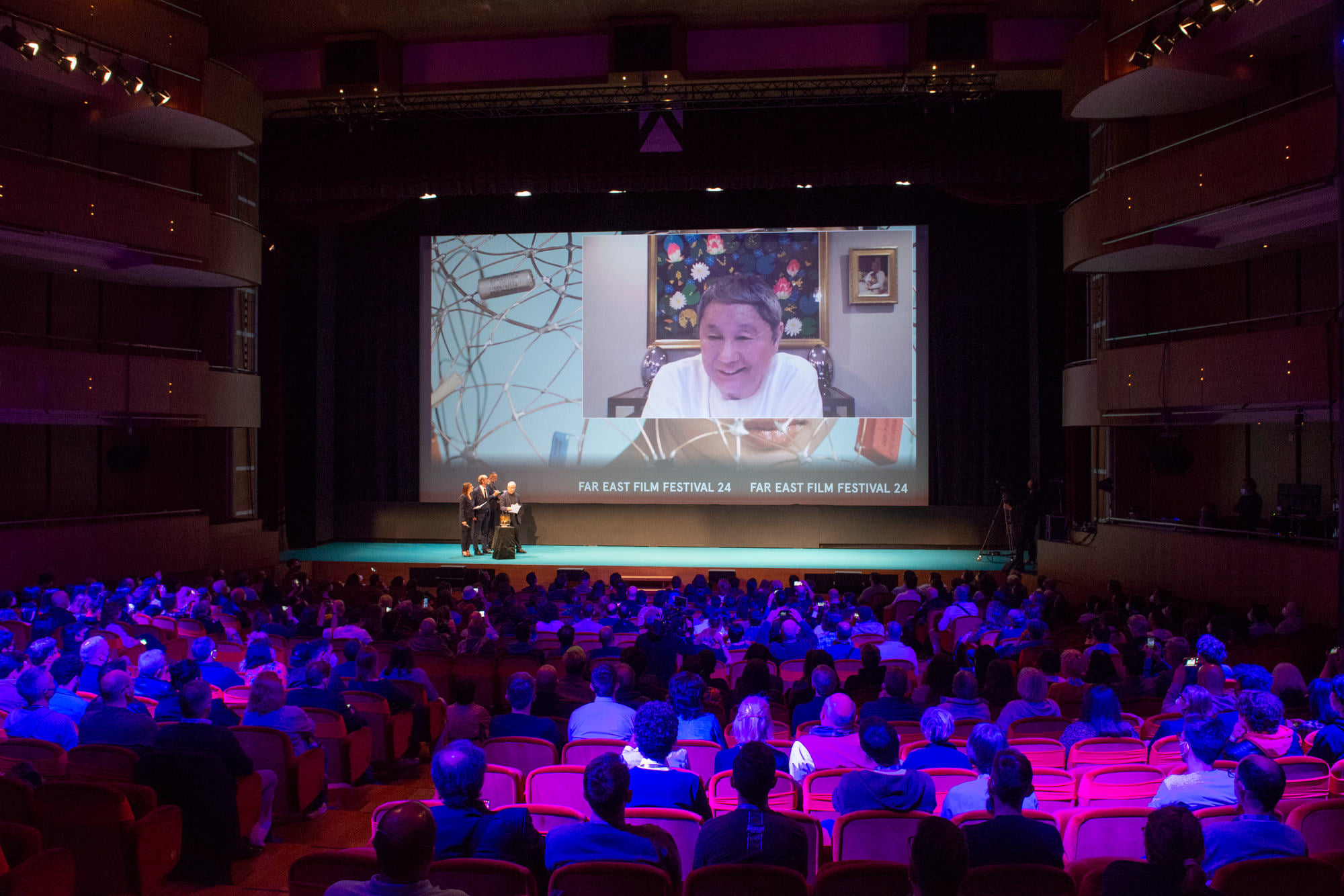 Takeshi Kitano tunes in from Japan to receive the Golden Mulberry Award for Lifetime Achievement on April 29, at the Teatro Nuovo in Udine, Italy. (Credit: Far East Film Festival)

The event, called FEFF by many, is a cinema festival which focuses on East Asian films from Japan, South Korea, China, the Philippines and many other countries. It has taken place far away, however, in Italy’s northeastern city of Udine since 1999.

A “Kitano Day” was organized by the festival on April 29, along with a gala event to honor the Japanese film director. The gala featured a showing of the film Sonatine (1993), one of the most famous films by Kitano, where the main character ー a tormented yakuza ー gets entangled in a gang war.

Sonatine is just one of many films that Kitano has produced over his career spanning more than 30 years. Others among them: household titles such as Battle Royale (2000) and Kikujiro (1999).

Kitano received the Golden Lion in the Venice International Film Festival for Hana-bi (Fireworks) in 1997.

Tuning In from Tokyo

Tuning in virtually from Japan at 2 AM JST, Kitano – with his characteristic twisted smile – thanked the audience warmly.

Kitano was scheduled for the ceremony in person. But then on April 28 the announcement came suddenly that the director would not be attending the ceremony.

Appearing visibly apologetic, Kitano explained in his April 29 online speech that he had prepared everything to attend the ceremony, until almost the very last minute.

I had the PCR test, I had gotten my last shot of the vaccine, and had even bought a suit. But then the situation in Ukraine, the length of the journey, I am also a certain age. Therefore, I decided that it was best not to come.

I am in the midst of putting together my new film. Hopefully I will be able to attend the ceremony in person and present my film next year, I’ll absolutely come next time, commented Kitano.

Almost dejectedly, he added: “Especially due to the situation in Ukraine, I wanted to stand up for freedom of expression and show the importance of cinema. So I am really sorry not to be able to be present.”

Celebrating In His Absence

Despite the absence of the maestro in the Teatro Nuovo di Udine, the atmosphere in the theater was electric. Kitano fans could be seen wearing matching t-shirts and sporting banners reading, “Takeshi Kitano is the God of Film.”

As the Far East Film Festival president and artistic director Sabrina Baraccetti explained during the ceremony “People in Italy have grown up with maestro Kitano’s films. Italy is the place that has the most fan clubs for Kitano. There is even the Kitano religion!”

A gala attendee Alberto Fantozzi (27) told JAPAN Forward how special it was to see Kitano, even if virtually at the event: “You really feel the commitment that Kitano has to his art. And to making films.”

Popular Around the World

This is only a small part of Kitano’s appeal around the world, as the multi-faceted actor has found ways of touching the heartstrings of people everywhere.

“As an artist, Kitano is such an interesting character. You never know what he will do next,” explained filmmaker Yves Montmayeur, in an exclusive interview on April 30. Montmayeur is the director of a documentary on Kitano’s life, Citizen K (2021).

“I think that is his strength,” he continued, “and what makes him an incredible artist all around the world.”