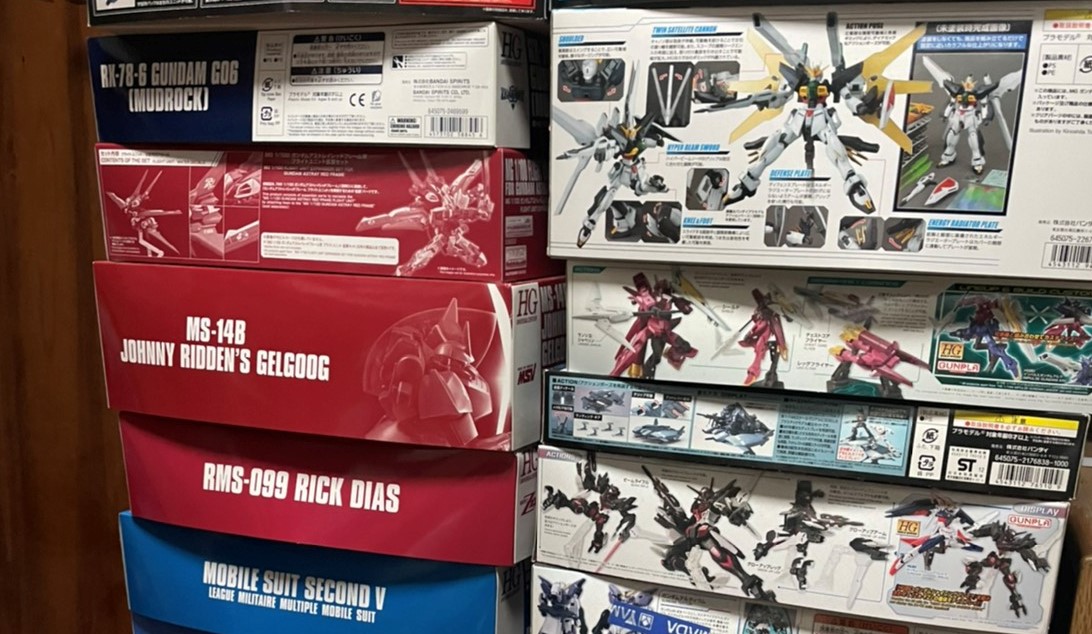 'Gunpla' goods: boxes of Gundam plastic model kits that have recently become a popular hoarding item for hustlers looking to resell them quickly for big money.

The anime series Mobile Suit Gundam celebrated its 40th anniversary in 2019. Ever since first airing in 1979, it has earned immense popularity and become one of Japan’s leading subculture exports. Gundam plastic model kits of the robots (“Gunpla”) from its many series and spin-offs enjoy worldwide popularity, even today.

Collectors frantically compete with each other over these popular model kits whenever a new model is released. Recently, however, the Gundam market has been devastated by the widespread prevalence of hustlers on flea market sites such as Mercari, who buy up all the models and then resell them at exorbitant prices.

The situation worsened following the postponed release of the movie Mobile Suit Gundam Hathaway -the latest installment in the series- due to the COVID-19 pandemic. Originally scheduled for May 7 release, it finally hit movie theaters on June 11.

As the delays continued, however, some Gunpla goods were reportedly being sold for more than double their retail value, at ￥40,000 JPY ($367 USD).

The COVID-19 emergency declarations led to “nesting” at home by people of all ages in Japan. The restrictions on shopping and closure of stores played a role in the activities of hustlers, who stepped into the gap. In addition, housewives, grandparents, junior high and high school students, not just the traditional Gundam model fans, became interested and contributed to the overheated market.

The Inside Dynamics of the Gundam Boom

As an academic researcher, I have followed the interplay from a cultural and sociological perspective and want to explain just how it developed.

The recent market has far exceeded the Gundam boom of the 1980s. Characterized by a chronic scarcity of products, shortages of Gundam goods are becoming the norm for stores. Even if Bandai Namco builds a new factory, it cannot keep up with orders from mass retailers, internet shopping sites, and wholesalers.

Although there have always been many resellers who sell both rare and limited-edition Gunpla, increasingly hustlers are dominating the market, taking advantage of customers and traditional resellers who stayed at home due to the pandemic, and causing Gundam-related sales to soar.

What separates these hustlers from the traditional resellers is an extensive communication network, including sharing information by SNS such as Instagram and Twitter on where Gundam stock can be found. These networks even include video sharing sites with “how-to” videos, such as “The 5 Skills of Gunpla Hustling”, adding to the level of professionalism.

Not only do these hustlers target the in-store launch dates of new Gundam goods, they even target reproductions and models that have hardly shifted for years. They flood websites as soon as orders open, causing servers to crash.

Early in the morning on the day of a release, they form massive queues outside electronics stores and shopping malls where Gundam goods are often sold at a 20% discount off list price. Then, within a few hours, they start reselling them on flea market websites at about 20-30% above list price, with the difference becoming their earnings.

This has angered collectors, who can’t get their hands on Gundam goods because of these hustlers who flock to stores with no regard for avoiding the spread of COVID-19, and buy up all the model sets. It is also apparent from the online comments of these hustlers ー such as “Today’s Gunpla mass GET,” and “Easy victory www,” that they do not have the slightest interest in or appreciation of Gunpla. That has made it even more infuriating for collectors.

Delay of the latest movie, Mobile Suit Gundam Hathaway, spurred competition for related Gunpla goods, such as the most recent hot item ー the mobile suit Gunpla from the new movie. These collectables were difficult to find as soon as orders opened, which has created further resentment.

Even those models for which there was originally a surplus, such as the expensive set of the hero and his rival, which cost ￥17,000 JPY ($156 USD), have become extremely rare. Yet, immediately after release, they were being resold on various websites, sometimes for more than ￥40,000 JPY ($367 USD).

Impact on the Gundam Subculture

The phenomenon has forced many old shops and small businesses to close down. These small shops have always relied heavily on the sales of Gundam goods, but they have been unable to restock due to the malicious role of the hustlers.

Originally, collectors sought the models and collectables for their personal enjoyment and value as toys, and in their view, hustlers who have no nostalgic attachment or sentimental appreciation of these qualities should not be involved in the market.

It has been like an extension of the hoarding observed in 2020, when toilet paper and masks were snatched up and resold at exorbitant prices. The same phenomenon has been seen whenever there has been an oil crisis, earthquake or other natural disaster. And the market for newer toys, like Nintendo DS, Wii, and Sony’s PlayStation 5, among others, has not been immune.

Compared to these bigger-name electronic toys and household goods, though, Gunpla was a minor hobby until the last few years. Hustlers took notice of the increased popularity, and for that reason the heated market is likely to continue.

The battle between Gundam fans and hustlers will carry on, but is it a peculiar phenomenon because of the recent special circumstances, or is it a universal trend to some extent? Watch for continued reporting on the Gunpla market as it develops.