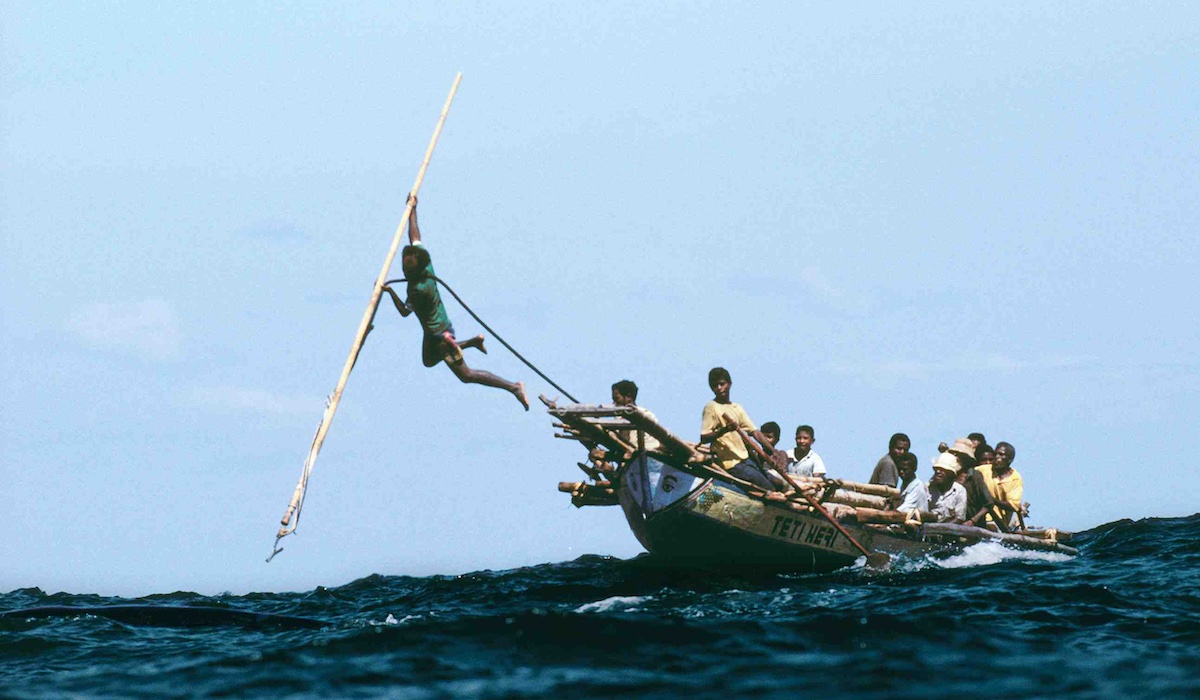 A low-slung wooden boat glides through the ocean, crewed by a score of men in T-shirts and bathing suits. All look out into the waves, and several stand aloft to better scan the horizon. The boat itself peers out from beneath the men, through painted eyes to ward off evil.

The men are searching for sperm whales, and when they spot one the crew cut their outboard engine and dig in with small paddles. The harpooner stands and stares intently at the water, until at last a massive whale appears just a body-length away.

As the whale’s giant pupil glides by underwater, the man steadies himself and shifts his gaze, because locking eyes with a whale is the surest way to lose your nerve.

In the documentary film Lamafa ー Japanese title Kujirabito, or “The Whale People” ー Director Bon Ishikawa whisks us to the seaside village of Lamalera, a tiny whaling community in Indonesia. We meet the grizzled “lamafa” whalers and the children that aspire to follow them to sea, their wives and widows, and the priests and shamans that bless their hunts.

But most impressively, we get to ride along on their sleek wooden boats as the men come eye-to-eye with the leviathans, and then, with astounding courage, launch themselves into the water to drive their harpoons home.

Isihikawa is a professional photographer who has been capturing images and video in Lamafa for nearly 30 years. His book of pictures on the town, “The Last Whale Hunters,” was published in 1997.

He has a photographer’s eye for the symbiosis between man and whale, and in the film this manifests in the act of seeing itself. The trust he has built up in the community gives him access to even the most private affairs in town, and allows us to observe touching scenes of family life: quiet dinners and wailing funerals, the local market where goods are exchanged instead of money, nervous whalers before they depart to sea.

“Seeing is an important part of the film,” Ishikawa told moviegoers after a showing earlier this week in Yokohama. “I decided not to add narration to the film, because I wanted the scenes to speak for themselves.”

The Lamalerans hunt whales from boats they build from scratch, using hand-forged harpoons, and even rope they braid themselves. Ishikawa documents the entire process. For the incredible whaling scenes he employs a host of modern technologies, including steady cams for the boats as they are smashed by angry whales, drones for overhead shots, and underwater cameras and microphones to capture the fray from the whales’ point of view.

“In the old days you could only shoot from the boats by hand, which gives you the point of view of the whalers,” he said. “But with drones you can capture the whole scene, the unique drama of the struggle.”

Lamafa’s preservation of its old traditions has long made it a draw for science reporters, whaling historians, and anthropologists, who have produced a string of mainstream and academic works about the town. Most recently, in 2018, journalist and photographer Doug Bock Clark published The Last Whalers: Three Years in the Far Pacific With a Courageous Tribe and a Vanishing Way of Life, (Little, Brown and Company, 2019), a deep dive into the community and its changing culture.

But no such works have captured the hunts to the raw, dramatic degree of Lamafa.

Ishikawa independently financed the film, and spent years waiting in vain for the chance to film a successful hunt, to the point that villagers began to think his presence was hurting their luck. He finally got the opportunity at the tail end of a long trip, on the last day before his visa ran out.

“I didn’t depend on big sponsors and refused to compromise, using all the time that was necessary for production,” he said. That he was able to film a hunt “was nothing short of a miracle. God had planned an amazing spectacle, and I was able to capture footage that will astound the world.”

Ishikawa’s first film was The Most Beautiful Village in the World, which he created to support Nepal in the aftermath of a major earthquake in 2015. He produced the film almost entirely on his own, receiving high praise within the film industry.

While his latest movie is about whaling, it avoids the usual controversy that comes with the topic. Instead, he focuses on the town of just 2,000 residents and their simple way of life.

Commercial whaling is banned internationally for adherents to the International Convention for the Regulation of Whaling (ICRW), but exceptions are granted for traditional whaling by indigenous peoples. Indonesia is not a part of the convention, and the local hunts are permitted under domestic law. Villagers also hunt other large sea life, including manta rays, dolphins, and whale sharks.

Lamafa is currently showing in theaters across Japan, after several delays due to the current epidemic. The film has received strong commendation from local critics for capturing the picturesque scenery of Lamalera, as well as incredible footage from the whale hunts. An English subtitled version has been prepared for overseas distribution in the future.

The film offers a stark contrast to the dominant images of whaling today – those of industrial whaling, in which explosive harpoons are fired down at the sea from fleets of steel ships equipped with powerful engines.

The town’s whalers, who must meet the gaze of the animals they hunt, represent a whaling time capsule, their methods remarkably similar to those of pre-industrial societies around the world.

“It is just a matter of time before this primitive form of whaling dies out. Whaling in Lamalera has many similarities to whaling in Japan during the Edo period, and I want this film to serve as a record for future generations,” Ishikawa said.

Photographer and nonfiction author Bon Ishikawa was born in 1960 in Oita Prefecture, Japan. Since 1990, after working as a photographer for the French news agency AFP, he has worked as a freelance photojournalist. His work has taken him to more than 60 countries around the world for photography on the theme of the symbiosis between nature and humans.

Ishikawa’s literary books and photo books include The Last Whale Hunters (Shinchosha, 1997), Inori No Daichi (Iwanami Shoten, 2014) and The Days After: Higashi Nihon Daishinsai No Kioku (Asuka Shinsha, 2011). He directed the film, The Most Beautiful Village in the World, which premiered in 2017.