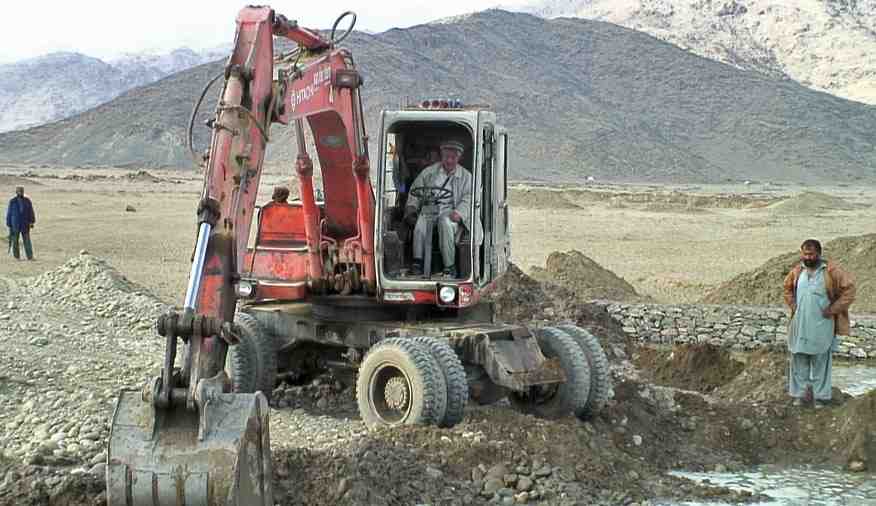 This is Afghanistan. Shown here, a humanitarian project to develop water sources in the country before the Taliban takeover (2019).

On August 31, 2021, the United States of America ended its near-20-year tenure of nation building within Afghanistan. The final withdrawal was carried out from the capital Kabul while under Taliban control, as the United States’ sponsored Afghan administration was unable to even survive the departure of the final American troops.

The following day, U.S. President Jose Biden cemented the well-known reputation of Afghanistan as the graveyard of empires by announcing that the era of nation building by the U.S. was over.

American nation building within Afghanistan was an outgrowth of the counter-terrorism operation to eliminate the threat of the Osama Bin Laden-led terrorist group al-Qaeda, which had carried out the attacks of September 11, 2001. It was championed by former President George W. Bush.

When explaining why the program would result in a libertarian, democratic, U.S.-friendly Afghanistan, President Bush routinely referenced the precedent of postwar Japan. If a nation as divergent and unique as Japan could be agreeably transformed through U.S. occupation, his reasoning went, any nation could.

The former president’s understanding of Japanese history was both shallow and poor. It included two critical misperceptions. The first is that Japan presently stands within the Western alliance as a result of transition from dictatorship to U.S.-gifted democracy. The second is that Japan was never an ally of the West prior to its defeat and occupation.

World War II-era Japan is often simplistically thought to have been under the control of the “dictator” Hideki Tojo, who led the government at the time. A dictator, however, does not typically step down from the position of national leadership before attending to the demands of his garden in the suburbs of the capital, as was the fate of this infamous wartime leader.

In reality, Japan has been a democracy for around 140 years, even during the course of the Asia-Pacific War. The foundations of Japanese democracy can be sourced to 1879, and a constitutional government with national elections commencing in 1890. A comprehensive form of male suffrage has existed since 1925 — 16 years before the attack at Pearl Harbor. Tojo was not a dictator, but prime minister, appointed in October 1941 and replaced in July 1944, a full year before the conclusion of the war.

To be sure, prewar Japanese democracy was immature, while during the war, it all but failed to function. In the general election of 1937, the electorate of Japan delivered a stinging rebuke to the militarist block — a “thumping” that counted for nothing. Over the course of the 1930s, structural flaws within the Japanese democratic system had become more than wide enough for the militarist clique to bypass the will of the people.

Party politics were then curtailed in 1940 when the political parties of Japan were swallowed up into the Imperial Rule Assistance Association: an amalgamation of the parties into a form of single party government. With the addition of threats and intimidation, the militarists were able to cower the moderates into submission. The structures of democracy, however, were never dismantled.

Accordingly, the Potsdam Declaration, the surrender demand that was presented to Japan in July of 1945, prescribed the revival, not adoption, of democracy, and that is what ultimately occurred.

Following the surrender of Japan in August 1945, the Cabinet of Prime Minister Kantaro Suzuki quietly dissolved, to be replaced by one headed by Prince Higashikuni, an uncle of then- emperor Hirohito. Douglas MacArthur toyed with the idea of a military government, but ultimately the Japanese parliamentary system didn’t stop functioning and was never even suspended. The political parties then reemerged from within the defunct Imperial Rule Assistance Association to provide the foundation for postwar party politics.

Prewar Japan was a weak democracy and unable to resist the militarist scourge of the war era, but it was nevertheless a constitutional democracy whose experience should serve as a warning to ostensibly mature democracies of the present day.

More to the point, Japan does not provide a useful comparison for the American venture to bring democracy to Afghanistan, despite the comments of former President Bush. Afghanistan’s experience with democratic institutions better paralleled the Japan of the early- to mid-19th century, before the foundations were laid for its constitutional government.

Cognizance of relations between Japan and the West is similarly far from complete. Japan is a natural ally of the West. The United States of America and Japan have had a constructive working relationship that stretches back to the late-19th century, and have never been in substantive policy disagreement concerning Asia, even during the Asia-Pacific War itself.

August 15, 1945, the date when the Japanese consented to unconditional surrender, was not the final occasion on which Japanese armaments were shouldered with intent. The moment the surrender was announced, the Japanese and American forces on mainland China went into a collaboration in which Japanese army units held the communists back from the cities they controlled while America airlifted in the troops of Nationalist leader Chiang Kai-shek.

America and Japan were both staunch anti-communist nations that sought to be the guiding hand behind an anti-communist Chinese regime. The Asia-Pacific War was fundamentally a battle to determine which of them would secure that right. Following defeat, Japan willingly cooperated with America so that its own primary goal of a non-communist China might still be met. It was acting in its own best interests, an interest America shared.

The heritage of shared military and geo-political aims between the United States and Japan can be traced back more than four decades prior to the raid at Pearl Harbor.

At the turn of the 20th century, a coalition of imperial nations marched on Beijing to put down the Boxer Rebellion, an uprising of Chinese peasants. Two main groups formed within the international force during the campaign. The first comprised soldiers from the continental nations headed by France, Germany, and Russia. The second contained the Americans and British (including a small detachment from the Australian colonies), in concert with the Japanese.

The resultant goodwill between England, America, and Japan provided a springboard for years of close cooperation.

A military alliance was concluded between Britain and Japan in 1902 (largely felt to have unofficially been a triple alliance including the U.S.) as Japan and Tsarist Russia were moving inexorably towards war over Manchuria and Korea. The United States was the first nation to recognize Japan’s subsequent claim over Korea, once the war had been fought and won.

Japan lived up to its treaty obligations during World War I by escorting the Australian and New Zealand Army Corps (ANZACs) to Europe and fighting against German detachments in the Pacific.

Shortly after the armistice was signed, America, Japan, and Britain formed the backbone of the Siberian Intervention: the ill-advised and little-remembered campaign against the Bolsheviks in Russia.

Relations became more workmanlike during the 1920s and 1930s, yet not to the extent of breaching the unity of the British-led alliance of imperial powers that continued to have its way upon the landmass of China until the start of the Asia-Pacific War. It was not until the late 1930s that relations between Japan and the West came under a decisive level of strain.

Unlike Afghanistan, Japan was an aspiring or fully fledged Western-leaning modern industrial state for all but a famous four of the 20th century’s 100 years.

There is nothing surprising about its present-day allegiances. On this issue again, using Japan as a precedent for nation building in Afghanistan was highly inapplicable.

In 2017, I published a book titled Remembering Santayana, the Lessons Unlearnt from the War Against Japan. The book cautions that the postwar transformation of Japan was a wholly inappropriate model for a 21st century nation building in Afghanistan and Iraq.

The title refers to the adage of Spanish-born philosopher George Santayana that “those who cannot remember the past are condemned to repeat it.” Those who fail to learn the lessons of history are doomed to reprise the errors of the past.

The relevant lessons had been expounded before. In Japan: The Story of a Nation (Charles Tuttle Publishers, 1974, updated several times), Edwin O. Reischauer, U.S. ambassador to Japan from 1961 to 1966, made note that the presumed “lack of democratic foundations” within Japan made the American reform program appear “radical,” while their “presence made it successful.” He saw that when attempting to build democracies in less-developed nations than Japan, nations under the grip of an “assertive new nationalism,” nations populated by those less willing to accept guidance than the “exhausted,” “disillusioned” postwar Japanese, U.S. planners were shocked to discover they had lost their “magic touch.”

Will the lessons ever be learned? Will the strong similarities between prewar Japan and the West be broadly acknowledged? Will the inapplicability of the Japanese postwar transformation model for anything other than a comprehensively defeated recalcitrant First World nation, with a solid grounding in democratic processes, ever be accepted?

In one sense, it matters not. If the United States has genuinely forgone its desire to build nations, the lessons can safely be ignored.

One would hope, however, that as the U.S. Senate committees examine the embarrassing withdrawal of the United States from Kabul, seeking to apportion blame, as will inevitably be their focus, they might also look anew at the primary precedent used for America’s approach to rebuilding Afghanistan. That is the precedent so passionately and misguidedly promoted by President George W. Bush, the self proclaimed “decider”: the post-surrender U.S.-led transformation of Japan.

Find other articles by the author at this link.

Find other articles on the history of the region at this link.