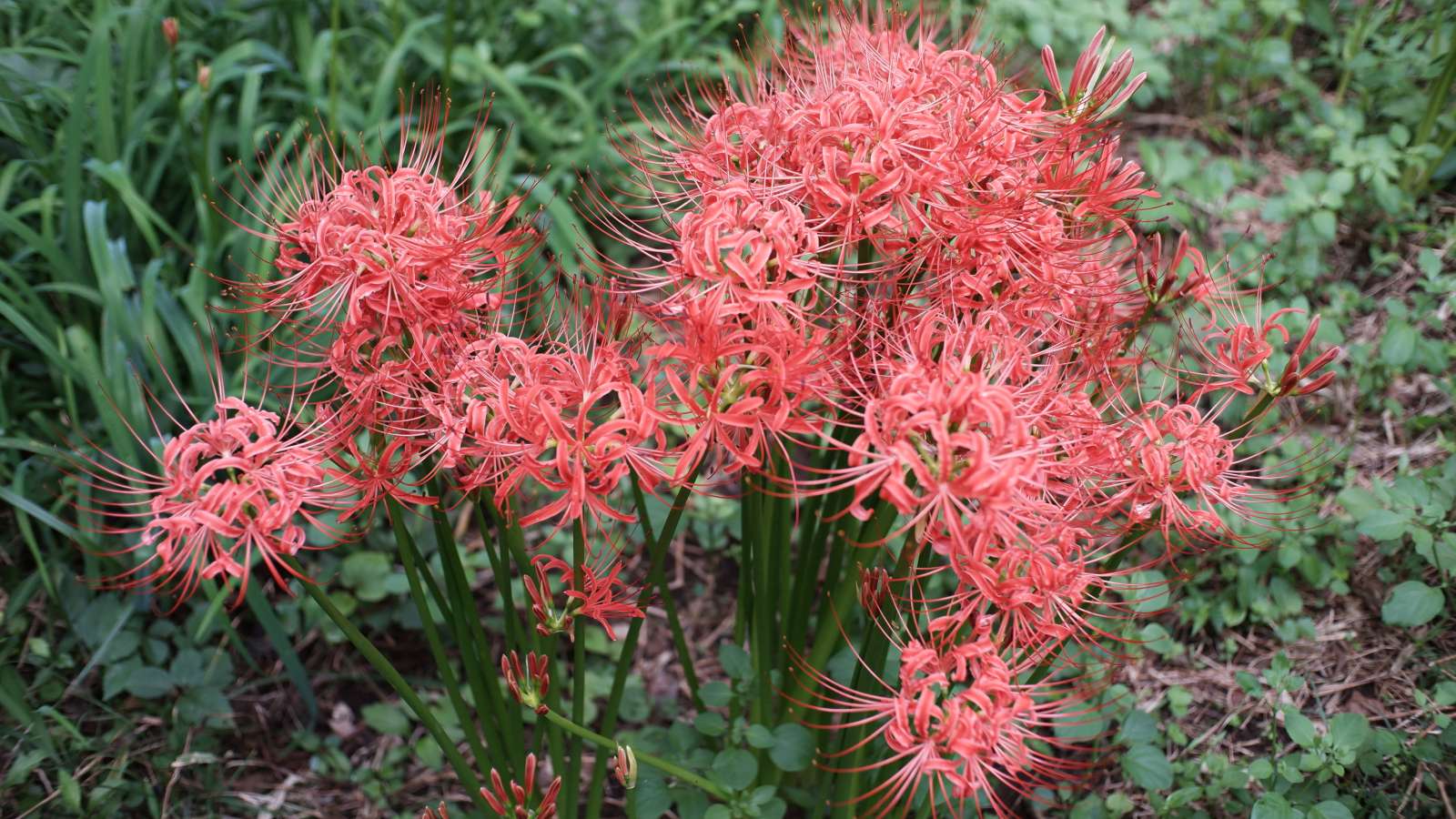 Japan has two public holidays keyed to seasonal change.  Vernal Equinox Day (春分の日, Shunbun no Hi)  is usually March 20 or 21, when days are becoming longer and the period of light and dark are equal.

Autumnal Equinox Day (秋分の日, Shūbun no Hi) is a public holiday in Japan that usually occurs on September 22 or 23, when days are growing shorter and the period of light and dark are equal.

As with the better known Japanese Obon celebration, both of the equinox holidays may involve visits to ancestral grave sites and ceremonies to remember departed ancestors.

The equinox holidays differ from Obon in that they are national holidays. Obon is customary, and its dates and associated customs vary by region within Japan.

The Autumnal Equinox is distinctive in that it is associated with the brilliantly tinted flowers of higanbana (spider lilies) that usually burst into bloom shortly before the equinox. Their colorful show begins after the first heavy rain in autumn at a point when there is a transition from the very humid summer weather in Japan to the much drier and more pleasant autumn weather.

Autumn Beauty by Many Names

Higanbana are also known as Manjushage or Manjusaka, meaning “the flower blooming in heaven” in Sanskrit. There are also many regional names for the flower as well as variants coming from their association with death. One Japanese language site lists more than a thousand different dialect names.

The common English name is red spider lily, lycoris or cluster amaryllis. The latter name reflects the fact that while lone plants with a single flower at the end of a single stem can be found, clusters of plants in a one meter or less radius are far more common.

A distinctive aspect of higanbana is that the flowers appear before the leaves, something that I had not noticed until I began reading about them this year.

While cycling, I have frequently seen higanbana along river embankments (levees) and the dykes separating rice fields. I had assumed that this was because this placement provided congenial growing conditions for the plant.

As it turns out, higanbana are found on embankments because they were planted there because the roots are poisonous and deter burrowing animals that might otherwise weaken the embankments.

This is also said to be the reason the flowers can be found around ancient grave sites. While cremation is now ubiquitous in Japan, even mandated, that was not always the case. Planting higanbana around burial sites was a method for keeping burrowing animals away from the corpses.

The poison is sufficiently strong that it can kill humans, although more typically it produces vomiting. It can be removed, however, and in times of famine higanbana have been detoxified and eaten.

Again, while cycling I had noted what seemed to be random patches of higanbana in fields. I had assumed that seeds had been blown by the wind or deposited by animals.

Instead, because the plants are poisonous, animals do not eat them and the plants have no seeds to be blown by the wind.

Rather, Higanbana are propagated from bulbs. This means that every cluster of plants that one sees is the result of human activity.

Straight rows of higanbana are clearly the result of intentional planting.

Other more random occurrences are probably the result of bulbs being included in soil that was moved from one place to another.

In photographing higanbana at Mizumoto Park and Koishikawa Botanical Garden, I also realized that my idea that the flowers prefer sunny slopes was wrong.

While hills covered with bright red higanbana are the attraction of some of the most famous viewing sites ー and appear in numerous travel promotion advertisements ー the plants seem to be capable of flourishing even in places that receive little sunlight.

Similarly, I had always thought of higanbana as being red and red only.  While red flowers are most common in the Kanto area, and are predominant overall in Japan, white and yellow higanbana exist, and are all the more striking because of their contrast with the more common red variety.

While photographing white and yellow higanbana, I heard others commenting about how unusual they were, with some saying they had never seen them before.

While photographing one planting of white higanbana at Mizumoto Koen, an elderly man asked me for confirmation that the flowers were indeed higanbana. Fortunately, I had done enough background reading before coming that I could do so.

While I have photographed higanbana in years past, this was simply casual scenic photography.  Since retirement in 2017, I have spent more time walking and cycling and photographing the many different wild flowers to be seen cycling and even more those found in what I call street gardens, something I took up in my article “In Tokyo Neighborhoods, Floral Beauty Amid the Beastly Pandemic.”

Recently I invested in a lens for closeup and bokeh effects, and have just started using software that performs flower and plant identification.

Google Lens for Android and IOs is free and appears to be reasonably good at identifying flowers and bugs. There is also commercial software for horticultural identification that I will be trying soon.

Although flower photography started off as something I did casually as a result of having a smartphone with a high quality camera, it has turned into a learning experience for me both as a (retired) social historian and a geek since my high school years.

Even without my somewhat peculiar background in which I went from electrical engineering to the social history of Japan, there is unlimited enjoyment to be found in tracking nature in Japan, whether it is in great public spaces and gardens or in rather generic residential neighborhoods.