In Tokyo Neighborhoods, Floral Beauty Amid the Beastly Pandemic 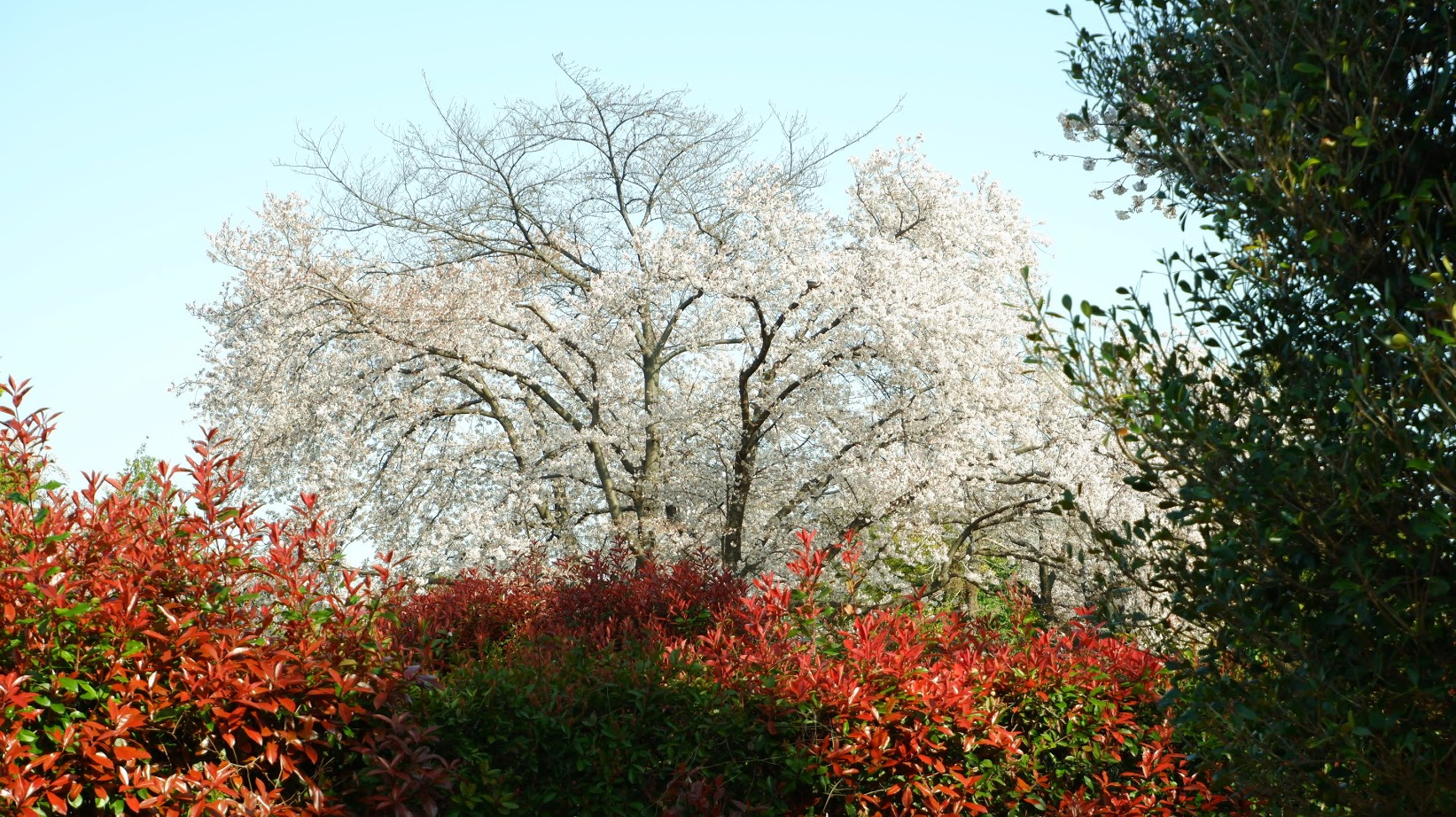 Spring in Japan is usually a season for flower viewing. It’s a seasonal activity that attracts Japanese, foreign residents, and tourists to well-known sites for picnics, festivals, or just strolling to admire the often breathtakingly beautiful displays put on by cherry and plum trees, as well as fields and hillsides covered with tulips and other flowers.

This year the cherry blossom viewing season in the Kanto region (Tokyo-Kawasaki-Yokohama and nearby areas) was greatly curtailed by two unforeseen events: the COVID-19 pandemic and a highly unusual late March snowfall in Tokyo.

As something of a substitute for coverage of the beauty of cherry blossom season in Japan that JAPAN Forward had hoped for, I offer here some personal impressions and photographs of the blossom viewing season, as observed within easy walking or cycling distance from my base in Tokyo’s Kita-ku (Kita Ward). 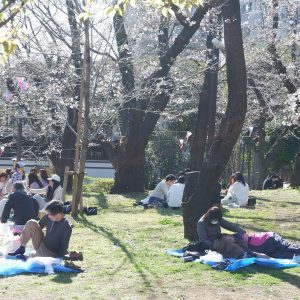 Even before the state of emergency, Asukayama Koen with few revelers for cherry blossom season 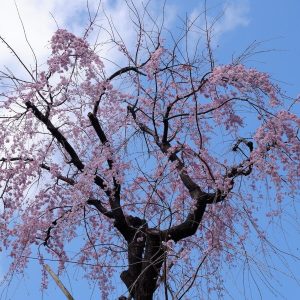 Asukayama Koen cherry trees blossom with few to see them 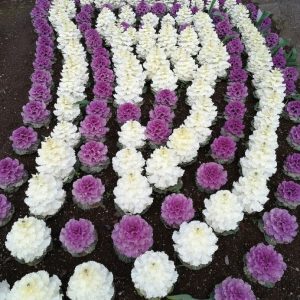 Asukayama Koen’s floral displays are not limited to cherry blossoms

Asukayama Koen is a well-known cherry blossom site that, in normal years, attracts television news crews who come to record scenes of almost the entire surface of the park under the trees covered with revelers viewing the blossoms while eating and drinking.

Even with news of the pandemic becoming more intense, park authorities initially appear to have expected much the same thing this year. When I visited the park in mid-March it was dotted with extra rubbish bins. But, even without strong governmental requests, people were already exercising self-restraint and the few picnic parties kept themselves well separated.

Concrete-covered areas that would have been filled with picnickers unable to claim a grassy spot were nearly deserted. The result was that I was able to enjoy the cherry blossoms, and other floral displays in near solitude, without worrying that I was standing where someone wanted to take a commemorative photograph. 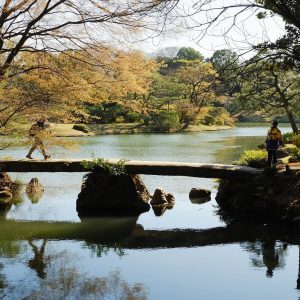 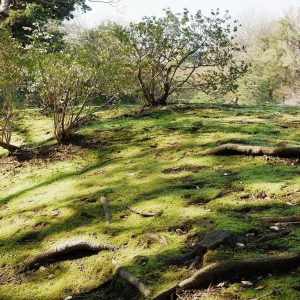 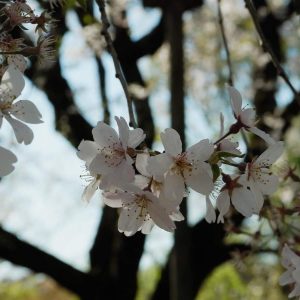 Other famous spots with walking/cycling distance of my SOHO did, however, attract crowds. I had planned to visit Rikugien, but when I saw the queue waiting for admission, I decided discretion was the better part of valor.

I did, however, visit Rikugien later in the week when it was nearly deserted. Overall, Rikugien does not have that many flowering cherry trees, but it does have one very old and very famous tree.  Rikugien also offers  moss and the bridge-over-pond settings that are an essential part of classical Japanese gardens. 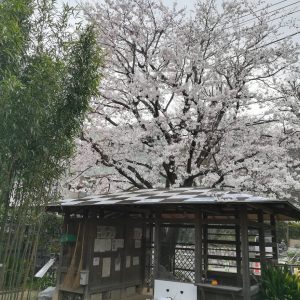 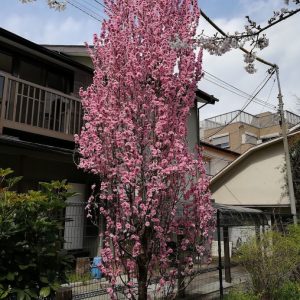 A peach tree at its peak in Somei Reien 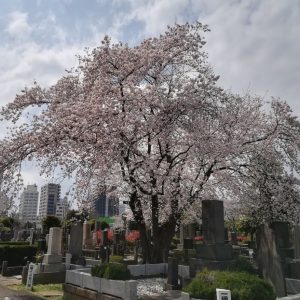 After giving up on my first attempt to visit Rikugien, I started cycling toward Somei Reien (Somei Cemetery), which I described in an April 2018 JAPAN Forward article. Before I got there, I noticed a small park and had a long conversation with the gardener who maintains it. Aside from the cherry tree at the entrance, he is especially proud of a peach tree that was at its peak.

As in past years, the cherry trees in the cemetery were putting on a dramatic display but only a few people wandered through to view them. 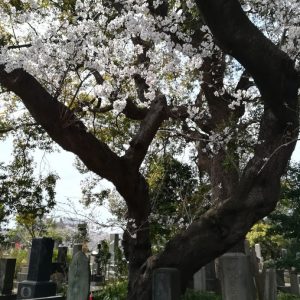 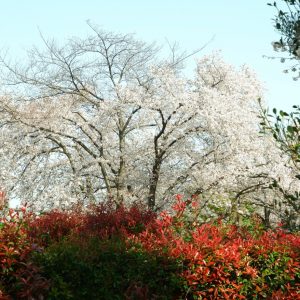 Cherry Blossoms and and new foliage at Somei Reien cemetery 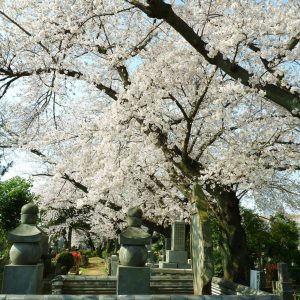 The cemetery among cherry blossoms at Somei Rien

Later in March, my wife, older son, and I visited Koganei, which houses the Edo-Tokyo Open Air Architectural Museum, the subject of an April 2018 JAPAN Forward article. During that visit, the grassy areas were almost entirely occupied by picnic groups.

This year the large grassy area fronting the museum entrance was largely empty, save for a few scattered groups of mothers with small children. 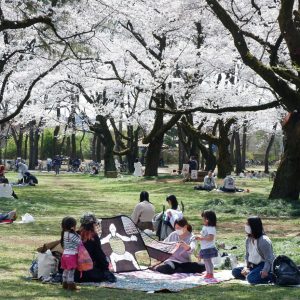 Koganei Koen with mothers and children 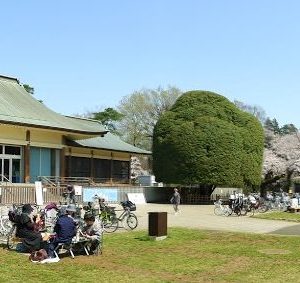 The situation was quite different at Inokashira Koen. It presented the kind of scene that has led many foreign commentators to claim that neither the Japanese government nor the Japanese people are taking the COVID-19 pandemic seriously, although anyone familiar with the cherry blossom scene in Tokyo would recognize that there were fewer people than usual and they were maintaining physical distancing. 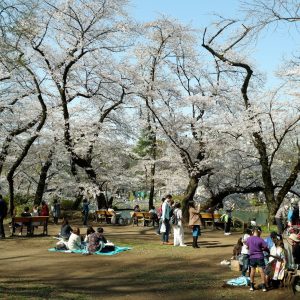 Inokashira Koen with far fewer visitors than a normal year 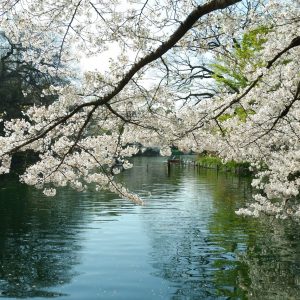 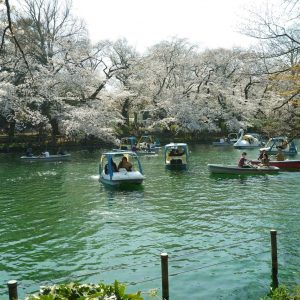 Inokashira Koen with far fewer visitors than a normal year

Shakuji-gawa Blossoms in the Snow

Tokyo weather had been balmy through much of March, but on the 29th it changed abruptly and we had a moderately heavy snowfall. My older son braved the cold and the snow to take a series of photos of cherry blossoms along the Shakuji River just west of Oji. 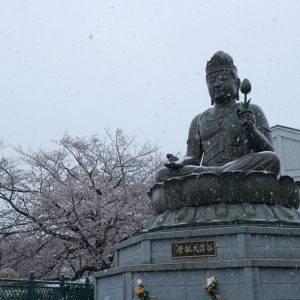 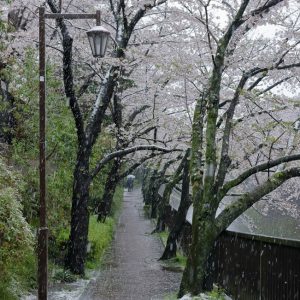 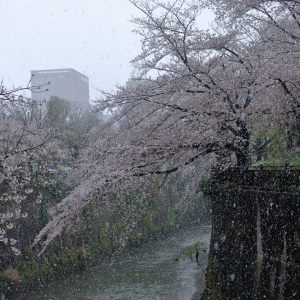 Here is the same general area without the snow. 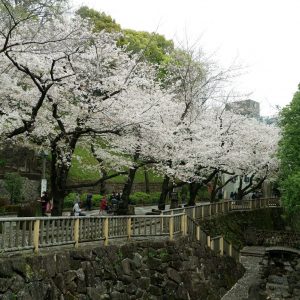 On October 12, 2019, the exceptionally powerful typhoon Hagibis made landfall in the Kanto region and the next day, October 13, saw nearly continual torrential rain. As intended, the Arakawa spilled out of its usual course and filled the overflow area between the levees on either side of the river, washing away the recreational facilities in the overflow area and putting the cycling course under several meters of water. I described this in a two-part JAPAN Forward article.

Even now damage from the typhoon is still apparent. One golf course is still waterlogged, and some athletic fields are still being repaired. The full cycling course was, however, usable within a week or so after the typhoon. My wife, my sons, and I have used it to go south from Oji to Kasai Rinkai Koen and north to Arakawa Saiko Lake.

Blossoms in the Hood

Because relatively few parks in Tokyo have been or can be locked down or cordoned off, people are still congregating in them, although in my area people generally seem to be maintaining physical distance. Nonetheless, I have been avoiding the numerous parks in my area, walking the nearly-deserted streets of residential areas for exercise and blossom viewing.

On Saturday, May 2, I did one of my walkabouts, accompanied by my wife. Her goal was exercise and a break from preparing materials for remote Japanese language teaching. My goal was exercise and photographs for this article showing the potential for blossom viewing in generic Japanese residential neighborhoods in Tokyo.

Within the 23 wards of Tokyo relatively few homeowners have even micro-sized gardens, but many still find ways to nurture flowering plants that put on an impressive spring display. Fence top flowers are quite common. 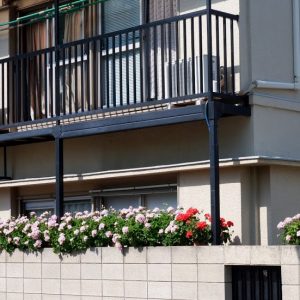 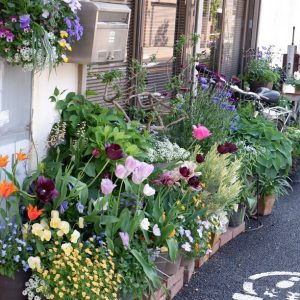 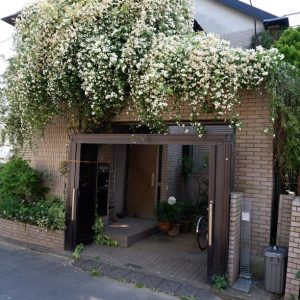 Some houses are covered in flowers

Some make use of the small space between their house and the curb. Others claim a portion of the street for their floral gardens. Others let a flowering plant spread over their whole house.  And, in some cases, the neighborhood is made greener by plants colonizing the empty houses and apartments that have received so much exaggerated foreign coverage.

Whether the blossom viewing season in Japan in 2021 will be free of the constraints imposed by the COVID-19 pandemic remains to be seen. In the meantime, the photographs here are a reminder of what can be seen, not just at noted viewing sites, but in ordinary, generic Tokyo neighborhoods.