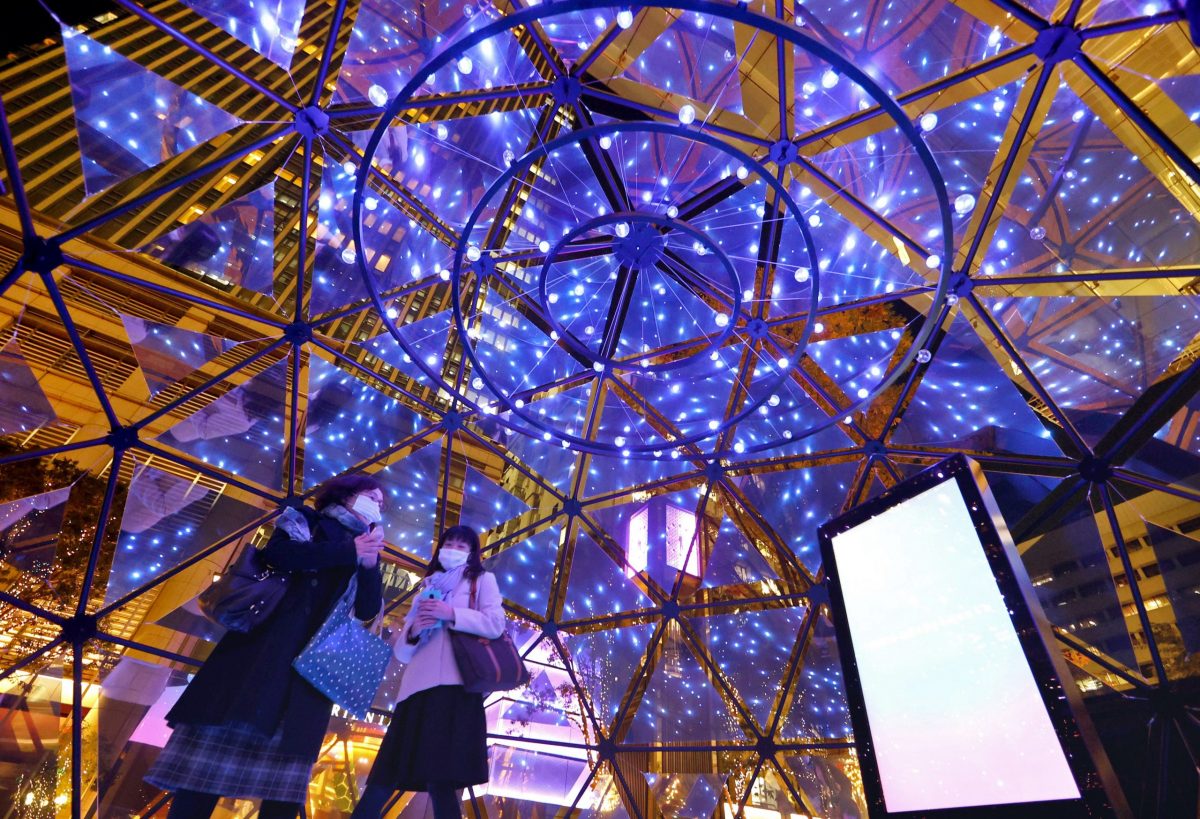 Many might think that it might be difficult to get into the Christmas spirit come the end of the year because Japan is not a predominantly Christian country.

But Japan makes up for its short history celebrating the holiday with an abundance of creativity and array of winter illuminations, both in Tokyo and around Japan.

Here is our pick of some of the most interesting and imaginative installations for you to enjoy going forward into the Christmas season.

One caution for this year, with the COVID-19 infections going up in Japan, it is recommended that visitors avoid the sites if social distancing cannot be preserved, or if there are large crowds or other high infection risk situations.

With that in mind, we hope you enjoy the Christmas season cheer!

1.  Step Into Space With ”Meteor Illuminations” in Nihonbashi, Tokyo

As the year end approaches, a Tokyo neighborhood has been adorned by something very special. It’s called “The illuminated town of KIBO” where kibou means “hope” in Japanese.

There is a semi-circular dome-shaped “Meteor Cupola“ that has been mounted in the COREDO Muromachi Terrace in Nihonbashi, a shopping and entertainment complex located in Tokyo historic commerce and mercantile neighborhood.

The particularity of the cupola is that it’s linked with an actual meteor, and therefore has the unique feature of shining at the same time as the actual object. Illuminations start when meteors are detected at one of Japan’s six observatories, where they are measured every 15 minutes.

In addition, in keeping with the theme of “hope”, visitors by using a QR code can also make a wish, and when a meteor or shooting star is detected, it will come up as an illumination for all spectators to enjoy. This makes the experience extra interactive for children and adults to enjoy!

This space-themed illumination experience comes at an appropriate time when Japanese public interest in space-related technology has risen.

In addition, the asteroid explorer “Hayabusa2” returned to earth with a sample of materials from a space rock on December 6.

The chandelier-type illumination “Ginza Chandelier” on the outside wall of the Mitsukoshi Department Store, in the shopping district of Ginza is highlighting the Christmas mood.

Since November a large chandelier has been glittering outside the historical department store. According to the company’s spokesperson, the illumination is about 22 meters long and 12 meters wide. It has been lit up everyday since the end of November, and will continue to be lit from 4:30 P.M. to midnight until December 25.

The observatory on the 7th floor of the main Mitsukoshi building, which also contains the upper part of the chandelier, will be opened from December 22.

“The view from above (about 25 meters above the ground) is a novelty, unlike what you usually see from below,” said Yuko Sugamoto, a 33-year old woman who lives in the same neighborhood and was visiting the department store with her family.

At the large-scale “Shibuya Stream” complex in Tokyo’s youth-oriented Shibuya neighborhood, passers-by can do more than simply enjoy illumination for technology lovers. They can actually interact with the feature and change the colors of the illumination from their smartphone.

An arch decorated with lanterns has been installed on the big staircase of the complex. When one reads the QR code on the stairs and selects a word or color on the special internet website, the illumination changes colors from red green, or blue. It has been called “Light of Wish”.

This is a Christmas project initiated by Tokyu Corporation, which operates train lines and department stores, and the Shibuya Stream complex near Shibuya Station. The event will go on until December 25.

The lanterns are intended to convey the image of different foreign countries such as the United States or China, and to underline the importance of connecting with people at a time when traveling abroad has become difficult due to the COVID-19 pandemic.

LUMINE EST Shinjuku (Tokyo), a leading developer of multi-purpose shopping malls in Tokyo, has installed a Christmas tree with illuminations in the square outside the Shinjuku Station East Exit. The trees will be on exhibit until December 27, 2020.

LUMINE Co., Ltd. and East Japan Railway Company have been jointly involved in making the area in front of Shinjuku East Exit Station more beautiful. As part of this effort, they appointed Tomokazu Matsuyama, a contemporary artist who works in both the U.S. and Japan, to work on the appearance of the square in July this year.

This project to make the Shinjuku East Exit station square more beautiful will be Lumine’s first initiative. It is the company’s intention to create a space “where we can tell a story.” Lumine was looking for a better way to coexist with the local community and make the entire plaza an art space.

With its completion, the area in front of Shinjuku East Exit Station – the busiest train station in Japan – will serve as a community space for the local residents as well as a landmark for visitors to Shinjuku from home and abroad.

Off the Beaten Track Outside Tokyo

5. Tottori Flower Park Has More than 1 Million Bulbs, With Themes for All Four Seasons of the Year

“Flower Illuminations” and the “Hydrangea tunnel” were unveiled for the press at Tottori Hanakairo (Tottori Prefectural Flower Park) in Nambu, Saihaku-gun,Tottori Prefecture on the evening of December 11.

In the 80,000 square meter garden, there is a “hydrangea tunnel” where blue light shines overhead, and a “light flower field” where red and pink lights represent salvia and daisies.

“This year, the park was temporarily closed from April to May because of the new coronavirus,” according to the spokesperson. “We displayed the flowers of each season, hoping the public will enjoy it throughout the year next year.”

6. Blue Illuminations: Wish for the end of COVID-19 at Meiwa Gakuen Junior College in Gunma Prefecture

When members of the Student Union played “Kiyoshiko no Yoru” (“Silent Night”) with handbells, blue Christmas tree-shaped bulbs lit up from the entrance door to the fifth-floor window of the building. It was the students’ way of expressing their hope for the end of the new coronavirus pandemic, as well as their gratitude to the medical staff on the frontline.

This year, all events such as school festivals were canceled as a measure to prevent the spread of COVID-19.

As Yuna Takahashi (22), the chairman of the Student Union said, “I don’t know if we can hold a graduation ceremony this [coming] year so we planned this as something we could remember.”

The illumination ceremony was held on November 24 at Meiwa Gakuen Junior College in Maebashi City, Gunma Prefecture, and the illuminations continue until December 25.

The students took a commemorative photo and enjoyed their creation.

7. ‘Jidai Matsuri’ Drawn by Illuminations on the Grand Staircase of Kyoto Station

Kyoto too is doing its part to add to the year-end decorations.

The grand staircase of JR Kyoto Station in Shimogyo-ku, has been decked with 15,000 LEDs bulbs depicting historical characters of the Jidai Matsuri.

This is a traditional festival that in most years is held until October 22. Commonly known as the “Festival of Ages” it depicts various periods in Japanese history and famous historical figures to celebrate the anniversary of Kyoto’s founding.

This year because of the COVID-19 pandemic, Kyoto City canceled the procession at the annual Jidai Matsuri. Instead, on November 17 spectators pointed their cameras at the colorful illuminations on the steps of the station.

On 125 of the 171 steps of the grand staircase, in a space which is 29.5 meters high and 15 meters wide, colorful lights depicting parades of historical figures such as Masashige Kusunoki, a warlord in the Kamakura Era (1192 to 1333), joins soldiers in the Meiji Restoration period (1868 onwards) and other historical portable shrines.

As one visitor, Tomoya Narasaki (57) from Himeji City, Hyogo Prefecture, said, “I was very disappointed [because of the cancelation of the festival] this year. But the beautiful illuminations made me feel better.”