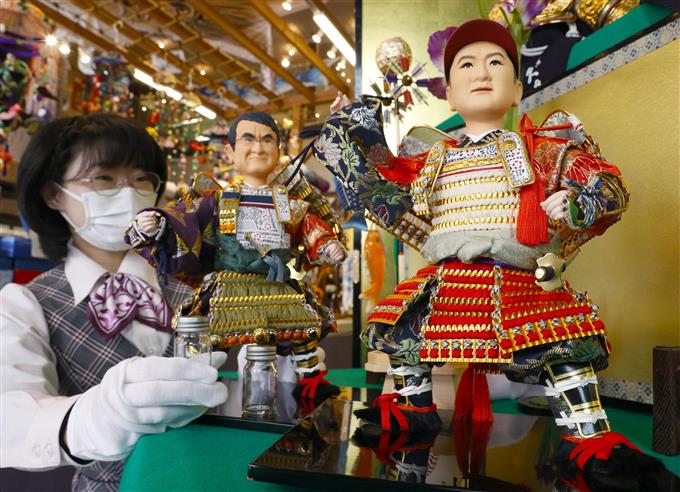 The Boy’s Festival happens in the beginning of May. The festivity calls for specific decorations, which are traditional samurai-armour themed decorations, for the well-wishing of all young boys around Japan.

One dollmaker shop in Taito Ward, Yokote, is getting ready in their own unique way. Every year, they design dolls representing one or two people they believe will be key protagonists in the coming year and dress them in a traditional samurai general’s uniform for the occasion.

And on March 25, this year’s two generals were unveiled. Moreover, they reflect the uniqueness of 2021.

The first is none other than Taro Kono, the minister in charge of the vaccination program in Japan. The second is the hugely popular baseball player Masahiro Tanaka, who, after playing for the New York Yankees, returned to the Tohoku Rakuten Golden Eagles just as Tohoku approached the tenth anniversary from the Great East Earthquake of 2011.

The dolls are about 30 centimeters high, and the images are spot on compared to the real people. Kono is shown with a shrewd expression, and Tanaka has a baseball hat and manages to convey an athletic dynamism, even in traditional Japanese samurai armor.

“Originally, dolls are talismans. I think everyone has a hard time with COVID-19, I would like for it to become a world where these two protagonists can play an active role in society.”

Yokote’s Tokyo branch is located near the JR Asakusa-bashi station. It will be displaying the dolls until March 26.

Shops in Aichi, Osaka and Fukuoka will be progressively exhibiting the dolls in the coming days.