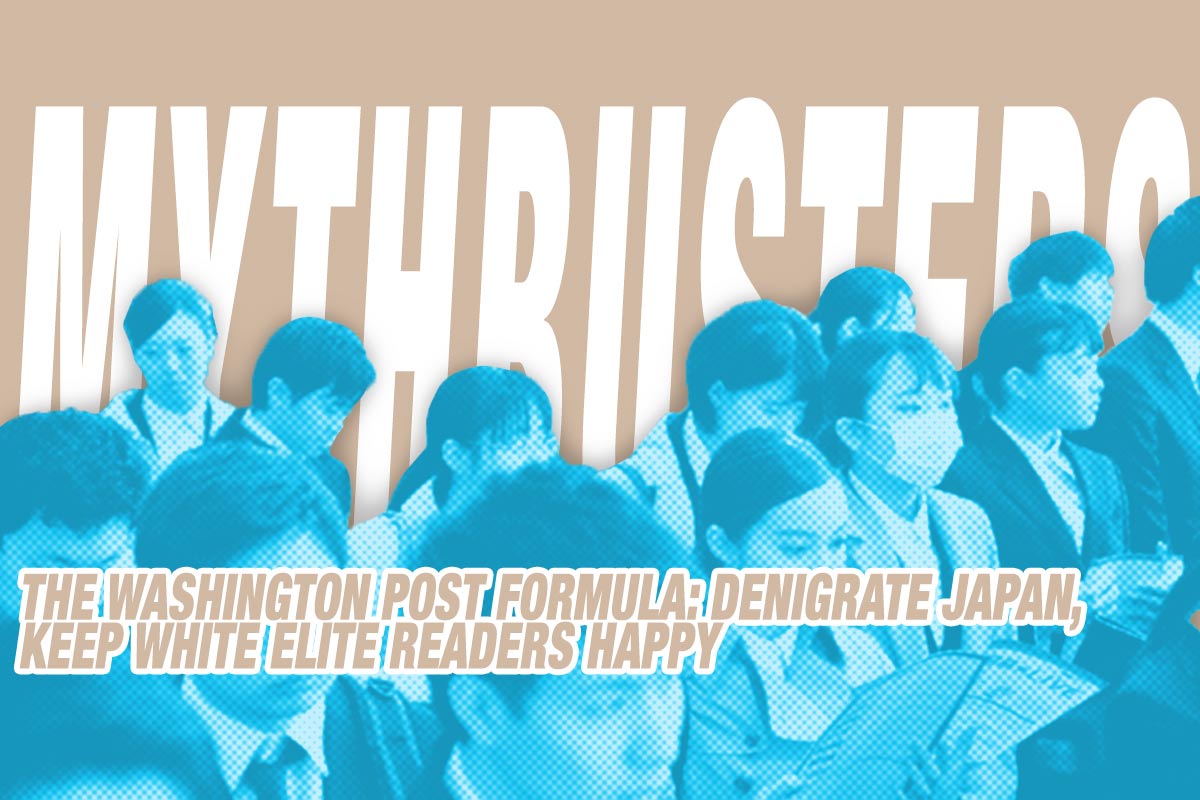 For nearly two decades, I taught a course called “Japan in the Foreign Imagination” at various universities in Japan, including Keio University and Saitama University. In doing so, I came to realize that most English-language coverage of Japan was intended to make foreign readers feel that their country was superior to Japan and that they themselves were superior to the Japanese.

A recent article in the Washington Post is a blatant example of this. Entitled “Black hair, white underwear: A battle resumes over Japan’s bizarre school rules,” it was published on March 14, 2021, under the byline of Simon Denyer and Julia Mio Inuma.

The content is nothing more than a rehash of other previously published reports about a former student who won a lawsuit for damages after she “was hounded out of high school because her hair wasn’t black enough” and a story that “in the city of Nagasaki, nearly 60 percent of 238 public schools demand that pupils wear white underwear.”

Essentially the same story has been reported by pop culture sites, the New York Times, and other news media.

The real significance of this article in terms of media coverage of Japan is in the demographics of the WaPo readership and the attitudes toward Japan/Japanese expressed in the comments.

The Comments It Allows

Each WaPo article that allows comments (not all do) has this notification:

This conversation is moderated according to The Post‘s community rules. Please read the rules before joining the discussion.

We don’t allow comments that degrade others on the basis of gender, race, class, ethnicity, political beliefs, national origin, religion, sexual orientation, disability or other classifications.

Nonetheless, you see numerous comments similar to the following:

Let’s face facts. Japan as a country has historically been intensely racist and unaccepting of any but ethnic Japanese…. To the extent that the practices cited in this article continue to occur it’s an indictment of the Japanese’s ultra-conforming mindset and attitude. This is just one repulsive example; there are many more examples to be found in their business world as well. (S_M_L_49)

Japan is still the feudal, racist society it has been for centuries…. The way children are raised in Japan should really be recognized as some form of crimes against humanity, because the repressive militaristic social system destroys the very soul of every child from very early age starting in Kindergarten.  (Blue-Lotus)

If comments such as these and many others saying much the same thing are in conformity with WaPo guidelines and have passed through WaPo moderation, I hate to think of what might appear without moderation and guidelines.

To be sure, there were comments pointing out that similar school rules could be found in other countries, especially parochial schools. Others related personal experiences with very restrictive rules in the United States and Canadian schools.

Some provided links to articles dealing with U.S. lawsuits based on the suspension or expulsion of American children, usually Black, for having hair styles that went against school codes. Others pointed out that some U.S. schools do in fact try to regulate student underwear, most commonly brassieres.

I was unable to find any data about the racial or ethnic makeup of WaPo readership, but claims about the income and education levels of its readers and the properties featured in its real estate listings strongly suggest that the readership is very affluent white elites.

There is not much in the WaPo, especially in its international news, that would be of any interest to blue collar workers of any race or ethnicity. It is hard to imagine, for example, bus drivers anywhere in the U.S. being interested in whether the Japanese use fax machines, a subject taken up by Simon Denyer in an article in which he questioned the intelligence of the Japanese people.

Who is Simon Denyer?

The lead author for this article is Simon Denyer, a Brit who took up his post as the Tokyo bureau chief of the Washington Post beginning July 2018, after a posting to China. As he describes himself on LinkedIn, he is:

Reading his description of himself, I could not help but recall the introduction to the Superman television series I watched as a child: “Faster than a speeding bullet! More powerful than a locomotive! Able to leap tall buildings in a single bound!”

Other qualifications are a Master’s of Arts in Economics from Trinity College, Cambridge. This may impress those unfamiliar with British academia while bringing a wry smile, even smirk, to the faces of people who do know the significance of a Cambridge M.A.

As stated by the university itself: “In most UK universities, the Master of Arts is a degree awarded by examination. At Cambridge, the MA is conferred by right on holders of the BA degree of the University and on certain other senior members and is not available as a postgraduate qualification.”

In other words, it is what is called a “gong” in U.K. slang — something honorary with no real substance. These degrees (also awarded by Oxford University) have been the subject of frequent criticism. In 2011 a Labour MP called for an end to the awarding of M.A. degrees in exchange for £10 GBP (about $14 USD) at Oxford and Cambridge when all others had to spend thousands of pounds in fees, do real coursework, and write dissertations.

Who Owns the WaPo?

Since 2013 the WaPo has been owned by Jeff Bezos, the founder of Amazon.com. It is his personal property, not a part of Amazon.com. The purchase price was reported as $260 million.

While there have been no reports of Bezos personally intervening in WaPo stories, it would be most unusual if there was no 忖度 sontaku, as it is called in Japan: underlings trying to curry favor by doing things they think their superiors would like.

Even without this, articles by WaPo insiders make it clear that Bezos encouraged a push to make the newspaper more international and to build web traffic. As stated in a Forbes article, the Wapo got a new business model: “The old model relied on generating a high revenue per reader. Their new focus would forego revenue per reader in favor of acquiring more readers. In other words, a volume play.”

In the case of subjects related to Japan, what has resulted is a steady stream of articles more typical of tabloids than what one might expect in a newspaper that allegedly counts a large fraction of U.S. movers and shakers among its readers.

Even when the subject is more serious than the regulation of school kids’ underwear in a provincial Japanese city, such as the Japanese government response to COVID-19, the articles have been lightweight at best, with an emphasis on shortcomings rather than the overall success of Japanese policy relative to the U.S.

It has provided Jeff Kingston, a professor at Temple University Japan, with a soapbox for denigrating the elected Japanese government although Kingston, despite decades of residence in Japan, has not taken Japanese citizenship and does not appear to be literate in Japanese.

In 2019, the Washington Post published an article, “Japan is a Trumpian paradise of low immigration rates. It is also a dying country” by Francisco Toro, a Venezuelian journalist whose only qualification for writing about Japan appears to be having a Japanese wife.

The contempt the WaPo shows for Japan and the Japanese begins well before the articles are written and the racist comments are published.  Sending someone as arrogant as Simon Denyer to Japan is an affront, even before considering the fact that, in terms of reporting on Japan, he is functionally illiterate.

Even without this personal experience, I would suggest that Japanese companies avoid advertising in the WaPo. The large fraction of readers with hostile, even racist, attitudes toward Japan and the Japanese is not likely to purchase Japanese goods and services.

Japanese individuals seeking U.S. political news can find this without subscribing to the WaPo. Similarly, there are alternatives to Amazon.com, a company that, aside from providing the WaPo owner with his wealth, is also noted for its harsh and exploitative working conditions in Europe and its union-busting efforts in the U.S.