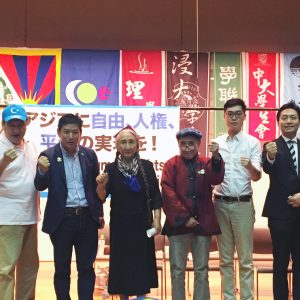 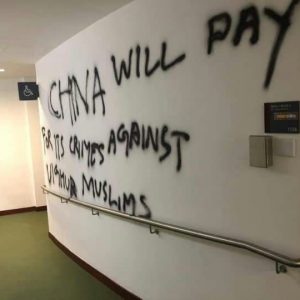 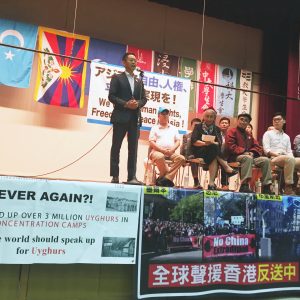 “We are brothers for life, aren’t we? If I go to prison, don’t forget me.”

Those were the words of Chan Ho-Tin, former convenor of the Hong Kong National Party, when he spoke to my husband, Hidetoshi Ishii, the Vice President of Free Indo-Pacific Alliance (FIPA), several hours after the march of 1,000 international protesters against Xi Jinping at the G20 in Osaka. The two noble warriors tightly shook hands and embraced each other.

Chan, who is internationally known as Andy, then quickly turned around dashingly and walked out – yes, to go back to the turmoil of Hong Kong.

What was behind his remark? How is it relevant to the recent controversies regarding Hong Kong?

Symbol of the Silenced Voices of Hong Kong

Chan Ho-Tin is the most oppressed person in Hong Kong. He is the first man to have been disqualified from serving in an elected position – barred from standing for the 2016 Hong Kong Legislative Council (LegCo) election for his stance on the independence of Hong Kong. Then, last year, his party became the first party in Hong Kong history to be banned under the colonial-era Societies Ordinance.

He was born and raised in Hong Kong, where such political activities have been part of the fabric of the island’s daily life. But they are fundamentally prohibited for him today. In other words, he is the most silenced man in Hong Kong, perhaps in Hong Kong history.

Why is Chan Ho-Tin silenced? The bottom line is that it’s about what Hong Kongers call the “Chinese colonization.”

Since June, Hong Kongers have been protesting the extradition bill introduced into the Hong Kong legislature last February. The bill, which some have accused of being politically motivated, would authorize the transfer of fugitives from Hong Kong as well as other places to the Chinese mainland for prosecution under the PRC’s opaque justice system.

In the midst of the protests, Hong Kong greeted the 22nd anniversary of its handover to the People’s Republic of China from British administration on July 1. Although pro-China powers arranged a welcoming mood by organizing groups to celebrate, Hong Kongers have instinctively treated the anniversary as a funeral, peacefully grieving the day Hong Kong “fell”.

The perspective lamenting the “fall of Hong Kong” originated from the perception that Hong Kong was not “returned,” but rather fell under “colonial rule by China” in 1997. Hong Kongers saw the dynamic as merely a shift from the British, who had colonized it since 1842.

The number of protesters in Hong Kong was said to have hit over two million on June 12. It was a huge protest – and it caught the world’s attention.

Simultaneously, the Hong Kong Police Force, who were given the purpose of blocking this historically peaceful, enormous demonstration, were unapologetic in the use of violence against their own citizens, as many of the world’s mainstream media outlets have reported.

The violence included using rubber bullets against citizens by aiming at their heads. Even the press was not immune as the Hong Kong Police Force showed they were willing to take whatever action it deemed necessary to shut down the protests.

Meanwhile, however, Hong Kong Chief Executive Carrie Lam and the police force described the situation the other way around, saying that from the early stages that protesters are “mobs” and their actions are “riots.” Protesters have demanded a complete recall of those claims.

Some may wonder about the break-in of protesters to the Hong Kong Legislative Council on July 1, the 22-year anniversary of the handover. The reactions of Hong Kongers were varied. Some suggested that protesters should refrain from any kind of destructive act. Others said they believed that the break-in was a conspiracy that came from the Chinese side to provide an excuse to oppress the Hong Kong protesters. However, what I hear from young Hong Kongers differs from both theories. It appears that Hong Kongers are aware of the circumstances and facing them directly.

First, we must remember that people like us who live in free countries and those who live in Hong Kong have different governing systems. Elections for Hong Kong’s Legislative Council are limited at the convenience of the Chinese rulers. For instance, Chan Ho-Tin’s candidacy was rejected and he was disqualified from standing for election through an invalid, arbitrary process, as previously mentioned. Therefore, for young Hong Kongers, the Legislative Council is a symbol of fake elections, just as it is the symbol of Chinese colonization.

With this sentiment, the protesters sprayed paint covering the written letters that mean “China” at the LegCo building, but leaving the part that said, “Hong Kong”. For the same reason, out of respect for their own homeland, they didn’t touch any historical properties. Their graffitti was purely a political message.

Carrie Lam followed this, however, with sarcasm. She claimed that rule of law itself was important. However, the protester’s point was the Hong Kong LegCo has gone off-the-wall by making laws that deny freedom and democracy, forcing Hong Kong citizens to follow them.

Young Hong Kongers had acknowledged all the risks when they broke into the LegCo, but they confronted the government anyway. Why? Because they saw resistance against Chinese colonization as an imperative.

A phrase spray painted on the wall of Hong Kong’s LegCo reads, ”China will pay for its crimes against Uighur Muslims.” The message was written by protesters during the occupation as a clear message from Hong Kongers to Uyghurs. Growing solidarity of oppressed Asians is expanding. But how is this happening?

I was involved in the protests against China in Osaka during June G-20 meetings, named “Justice 20 (J20) Executive committee.” The meaning was derived from the twenty points of injustice.

The FIPA anchored in the center, then, the crowds of people seeking release from Chinese oppression in the region came to form a new organization which became J20. It grew bigger as it has never happened before.

There are a few reasons behind this.

A review of the partner organizations listed revealed wide ranging support, including Tibetans, Uyghurs, Southern Mongolians, Taiwanese, South Koreans, Vietnamese, democracy-seeking Chinese and Japanese. Chinese government officials in charge of keeping an eye on  so-called “ethnic minorities” must have been astonished to see the solidarity.

Another significant reason is that the J20 organization maintained neutrality among the participating groups and had the Japanese coordinators running the office. Among them is Hidetoshi Ishii, the Vice President of FIPA. He came up with the idea of the J20 Osaka protest and consulted with the various participants. On June 29 in Osaka, as many as 1,000 protesters made up of representatives and supporters of each ethnic group marched down the street holding their colorful national flags in their hands. No wonder we caught the eye of pedestrians and their cell phone cameras along the road.

Risk Taking Out Of Desperation

Another reason the spotlight was on the Osaka J20 protests was because Chan Ho-Tin came from Hong Kong to join it. As the most oppressed person in Hong Kong, news of his activity spread quickly among Hong Kong people.

Chan didn’t organize the protests in Hong Kong. Chan hadn’t taken any political action since the ban of his party last year, but once his participation in J20 was revealed through social media, others wanted to join. In a particularly revolutionary move, student councils at five universities decided to send their representatives to Osaka. About 100 young Hong Kongers including university students came to Osaka.

The picture of protesters in Osaka was historical. Five student union flags were held up next to the flags of Tibet, Uyghurs and Southern Mongolians. It was the very first time these flags were aligned together.

This time, through the J20, Young Hong Kongers stepped out onto a bigger stage and gained new experience by flying overseas and cooperating with other ethnic groups to raise their voices. They garnered the attention of the international media and were praised by Ms. Rebiya Kadeer, as well as people from Tibet, Southern Mongolia and Chinese seeking democracy.

I must admit that I’m worried about Hong Kong in the near future. Chan Ho-Tin told us, “We don’t know what’s going to happen after the G20.”

Tsering Dorjee, the President of the Students for a Free Tibet Japan and the Tibetan representative, explained the concern, noting at the Osaka press conference that, “After the 2008 Beijing Olympics, the oppression on Tibet became even worse.”

More recently, Hong Kong Chief Executive Carrie Lam stated that the extradition bill is “dead” at a press conference on July 9, but declined to withdraw it – which protesters viewed with great suspicion and frustration.

This vicious circle seems to go on and on until the protesters become tired or give up. Along the way, some protesters may become radicalized as they see no other way forward. If the world sees their protests as riots and stops supporting them, though, then all will be perfectly trapped by the intentions of the true aggressors.

“A riot is the language of the unheard.” – Martin Luther King Jr.