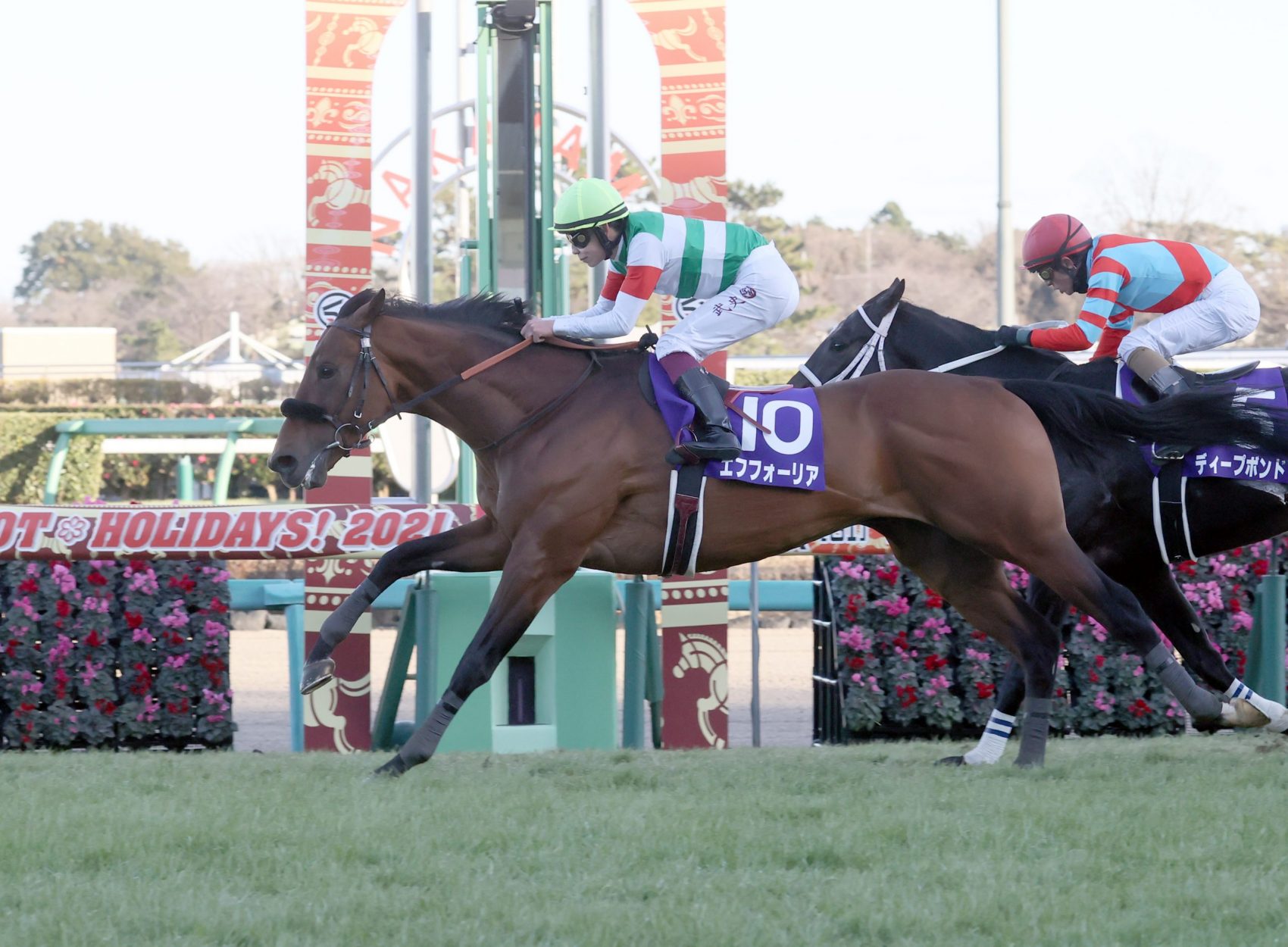 Efforia holds off Deep Bond to win the 66th Arima Kinen on December 26 at Nakayama Racecourse in Funabashi, Chiba Prefecture.

The favorite made the prognosticators look very smart.

With an efficient yet explosive effort, Efforia exhibited great poise under pressure en route to a riveting come-from-behind victory in the 66th Arima Kinen on Sunday, December 26 at Nakayama Racecourse in Funabashi, Chiba Prefecture.

Wearing No. 10 across his broad midsection, the 3-year-old bay colt captured his third Japanese Racing Association Grade I victory on the final weekend of the 2021 racing season.

Efforia beat Deep Bond, ridden by Ryuji Wada, by ¾ of a length. Guided by Christophe Lemaire, 2020 Arima Kinen champion Chrono Genesis, the second favorite, was a half-length behind the runner-up. (Watch the full race here.)

The outcome of the Arima Kinen, also known as The Grand Prix, was far from decided before the final stretch.

Ninth favorite Panthalassa was the frontrunner for nearly the entire 2,500-meter race. The lead extended to six lengths around the 1,400-meter mark, as Win Kiitos and Titleholder galloped in spirited pursuit.

Efforia, who was bunched up in the middle of the pack for most of the contest, had time to make a decisive move.

Other top contenders also increased their pace and closed the gap on the front of the pack.

Efforia darted past Chrono Genesis with 600 meters to go, moving closer to the front.

With a few hundred meters remaining, Efforia and Deep Bond were galloping faster than the other 14 horses, as they moved past Panthalassa in an exciting race to the finish line.

Efforia only led for about the final 4 seconds, but it proved to be the most important sequence of the race.

Despite falling short of the top spot, Wada said Deep Bond had a strong performance.

"The race flowed in an ideal way,” Wada told reporters. “I was particular about the inside and [Deep Bond] responded enough, but the opponent was strong.”

He added: "After returning from the overseas expedition [to France in the spring], with this performance, the horse will improve for the future I think, and I'm looking forward to next year."

Rounding out the top 10 were third favorite Stella Veloce, Titleholder, Aristoteles (another Epiphaneia-sired horse), Akai Ito, Mozu Bello, You Can Smile and Kiseki.

Kenichi Ikezoe, the lone active four-time winner of the Arima Kinen, couldn’t rekindle past magic aboard Mozu Bello. Ikezoe’s last victory in the race came in 2018 aboard Blast Onepiece.

Meanwhile, Efforia now has six victories in seven career starts. The other result? A runner-up finish in the G1 Tokyo Yushun (Japanese Derby) on May 30 at Tokyo Racecourse.

If there was any doubt about Takeshi Yokoyama’s ascension to the upper echelon of Japanese jockeys, Sunday’s result was a master class in big-time thoroughbred racing.

Yokoyama and Efforia performed in tandem with great purpose and appeared in sync every step of the way in their 2-minute, 32-second trek around the racetrack on Boxing Day.

After collecting the top prize of ¥300 million JPY ($2.8 million USD), Yokoyama reflected on the achievement and also compared Efforia’s performances at the Tenno Sho and Arima Kinen.

“He wasn’t in the same perfect condition today as in the Tenno Sho (Autumn) in which he was 120%, but his potential proved he still could give a remarkable performance even with the added distance — 2,500 meters was the longest he’s ever run,” Yokoyama said. “Unlike in the Derby, he was relaxed and positioned well and was able to show his true strength.”

Yokoyama, who celebrated his 23rd birthday on December 22, guided Titleholder to a triumph in the 3,000-meter Kikuka Sho on October 24. He also rode Efforia to victory in the 2,000-meter Tenno Sho (Autumn) on October 31. In addition, Yoyoyama and Efforia raised their profile with a win in the Satsuki Sho (Japanese 2000 Guineas), the opening leg of the Japanese Triple Crown races, on April 18 at Nakayama Racecourse.

Endurance is one of Efforia’s top traits on the turf. It’s also a part of his pedigree.

In 2014, his father, Epiphaneia, finished No. 1 in the long-distance division in the World’s Best Racehorse Rankings.

A year ago, Yokoyama and Blast Onepiece failed to finish the 16-horse Arima Kinen, for which fans selected the first 10 entries. The rest are decided based on race earnings in a given year. Blast Onepiece couldn't complete the race due to atrial fibrillation, according to reports.

Before he saddled up on Efforia and rocketed out of their assigned stall on Sunday, motivation to improve upon last year’s result certainly crossed Yokoyama’s mind.

On Christmas Eve, two days before the marquee race, Shikato assessed his horse's condition: “He was in excellent shape for the Tenno Sho (Autumn), and I’d say he’s close to that now. He has a good racing sense, and I think he’ll be able to handle the Nakayama 2,500 meters well. Since he’s only 3 years old, he’s still in the position of a challenger.”

With an unwavering fighting spirit, Efforia challenged and conquered the field. In doing so, Takeshi Yokoyama reminded the announced crowd of 6,140, a nationwide TV audience and observers around the world that he’s a name to follow whenever a race is taking place.

Norihiro Yokoyama, Takeshi’s father, won the 1996 Arima Kinen. Now, they are the second father-son duo to win the race.

Who did it first?

The elder Yokoyama, 53, continues to compete on the JRA circuit. He was 12th aboard Shadow Diva on Sunday.